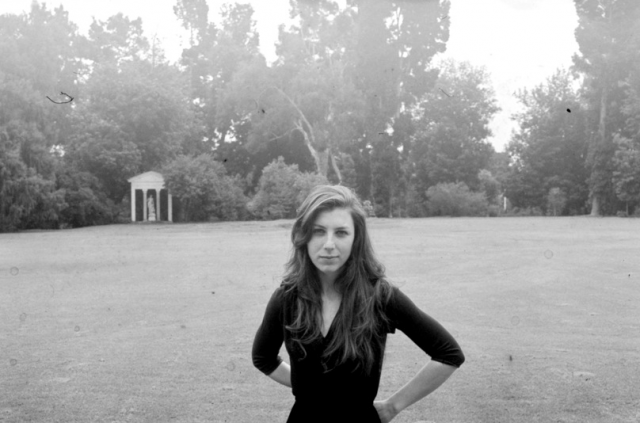 After doing things solo for her first two albums, Julia Holter has enlisted a much wider scope for her latest release Loud City Song. Julia talks to Philippe Perez about her new discovery of collaboration while making of this new album as well as the other extra-curricular activities she does outside of music.

Your latest album was recorded with an ensemble of musicians. How different was writing in that way compared to your first two albums where you created music in your bedroom?

It made it a little different. It was very freeing for me because I was able to make demos rather than making a final version of a song. This meant I didn’t have to focus on this like “oh, am I recording this well” and things like that. I could do things off the cuff based on the things I felt like doing.

What I wanted poetically came into it too. I thought: “OK, I’m trying to capture a poetic moment but I want to record it well”. That kind of thing got confusing when you are doing it all yourself when you’re capturing it. That can actually be interesting as a piece of work. But it also can be nice to not be reliant on just yourself to create that magic and to be able to work with people who are able to do magical things with recording.

There’s an interesting thing in that answer where you said you wanted to keep things poetic while trying to record things well. It sounds like there was a lot of technical element that you had to consider when making this album. When delving into the itty-bitty craft of songwriting while being poetic a trying task?

It was amazing how little of a struggle it was with this record. Working with other people made it so much easier. I never felt like communicating everything made it harder. That never really became an issue. It was just a happy story. I don’t think it’s always going to be like that but I just definitely felt it was a lucky situation, a lucky opportunity to have all these great people to work with.

It wasn’t hard to arrange for them and they’d always come up with stuff [musically] as well. It was very much like an exchange.

Did it take longer to record this album compared to your previous albums?

It took much less time and it was a lot easier with other people because they knew what they were doing. One person that’s a composer, poet, like me… I’m not a great at writing and recording. I’m not a great engineer… I’m actually not an engineer. All those things like that really made it a lot better to have people there who knew what they were doing.

Did you learn anything that possibly you could do for future albums down the path? Would you be interested in engineering?

I don’t think I want to engineer my own album if the goal of it is going to be it being precisely engineered. I really don’t see the reason. I don’t think that’s my role, really. I think there are people who have done that, or are masters at it and they’re like “there are too many people these days”. It’s probably all because the record industry is collapsing and so people are doing their own recordings.

To some extent that is cool and I want to do that. If I want to do a studio record, I want people in the studio who know how to use the studio! I want them to do magic with it, with all the buttons and that stuff. I’m not that person. It’s a scientific endeavor. You have to be really, really trained. I would never say, “oh, I’m just as competent like this person who has years of experience”. I’m never going to aspire to be that.

I see myself more in the poet realm. There can be people who do both. I’m just not really interested in doing everything myself. I’m not interested in being forced to do this thing that musicians do these days. To be a jack-of-all-trades. So many people who are writing and also engineering and also writing and producing can make it work. For me it’s not what I want.

You’ve mentioned the motif of poetry a few times. Do you like to write poetry in it’s simplest form, outside of music?

Yeah, a little. I’m not an expert at all. I don’t read a lot of poetry, but I read a little bit, and I have written a lot of bad poetry in the past. Especially when I went through a period of time when I really hated my music. I was miserable and just didn’t like the music I made. So, it was really nice to just write words for a while.

Musicians having other creative outlets are something that is fascinating for me, especially here in Australia because the [music] industry is small here. Musicians seem to delve themselves into writing as another craft or art. Is it common over in the USA too?

I went to an art school over here and at that school there was this program called ‘Integrated Media’ where different artists from different disciplines would collaborate together. These would be dancers, theatre people, conceptual art people (I call it conceptual art because that’s what art school really is). We’d all do art criticism and everything like that. I think that that was eye-opening to me in some ways because I met people who loved film and photography. A lot of these then I discovered later on made music or have in the past.

When I first started to come back to Los Angeles from college I met a whole bunch of musicians who would make their own album covers and all their own t-shirts. I actually spent a lot time in college making pictures and outlines of things, so I would be drawing all the time. That was fun

I wouldn’t consider myself a visual artist but medieval manuscripts inspired me. That was my last project. It was very strange actually, but I was really into it!

I think it is an inevitable thing that creative people [are like that]. I grew up drawing before I played the piano. I think that creative people are intended to be this way. They always oscillate between different things. For me, for sure I no longer am not interested in updating my visual art skills. That’s definite for right now. I don’t take myself seriously as a visual artist or anything.

But I do see myself as a writer and that my music is very much like poetry set to music, going back to that once again. The reason I say that is because people ask me what kind of music I make a lot of the time, and I don’t really have an answer. I think the reason for that is that I tend to come up with a poetic concept and then apply it to music. Then the music always changes according to the concept or what the scenario or atmosphere is.

I don’t really think “OK I’m going to make a dance song now”. I kind if think of musical ideas actually, but kind of not a lot of times. For that reason I tend to err on the side of wondering if people consider me being a poet and accepting me as such. I think that makes more sense, but it also sounds a little pretentious.

So I try to explain that when I say it [when people ask me what music I do]. So it’s not like I try to make myself seem ‘deeper’. The word poet is also a big word these days, especially since people don’t read poetry anymore. It seems a little pretentious, I know, but I hope people think about what I’m trying to say and get what I’m getting at too.

Speaking of doing other things, I read that you started doing a radio show. Can you tell me a little bit about that?

My friend Jelena has done a lot of videos for me and she has this show on this radio station called KCHUNG that is in Chinatown in Los Angeles. It’s a very limited broadcast. It’s just a bunch of artists who have an internet connection really. I don’t think it hits a lot of places except the nearby neighbourhood. You can listen online though.

It’s just a bunch of artists that have radio shows. I don’t think they’d call themselves artists actually, but the programming is a wide variety of things. My friend had one where she would read and explain what was happening in old Russian films. She would kind of narrate the story in the studio while she was watching it live.

I decided that it would be fun to do something, and she was being a bit tired of what she was doing, so we did this idea which we called Good Morning Los Angeles. That title is a joke because the show would air at night! It was a collection of field recordings and stories I would put together in a mix. All the stories and recordings would involve Los Angeles tangentially or places within the city. We would put it all together as an audio collage mix.

We just did it once and I thought it was really fun, so I hope to do it again!

I wanted to ask about your album Lost City Song. There is one particular song called ‘In The Green Wild’ where the vocal style has your lyrics in the verses has a type of spoken feel to them, while the rest of the song has this wistful feature. That’s how it feels to me anyway. I’m curious about how you have changed your vocal style. Do you explore your vocal style?

Every song changes the style. It’s all about blending with the sound and concepts and the characters that you’re making in each song. I think of every song as being different, with different characters. Of course my voice is not… I can do different voices but I can never be a professional classically trained singer. I’ve never had vocal training. There’s not a lot I can do, but I do what I can with what I have with different songs.

I try to also have fun with that as well. It’s actually more interesting to me than writing the words. The most exciting thing is actually delivering those words. If I can’t deliver it well then I’ll scratch the words, unless I want someone else to sing it, which I’m actually into the idea of as well. I’m actually into writing for other people too and want to do that soon.

Julia Holter is performing on the 10th February at The Perth International Arts Festival, 12th February at The Standard in Sydney and on the 14th at The Northote Social Club in Melbourne. She will be supported by Ducktails.