Interview: Imogen Clark on recording her EP The Making Of Me and moving to Nashville

Sydney singer-songwriter Imogen Clark drops her latest EP today, The Making of Me.

It’s been a tumultuous 18 months or so for Clark. The cumulative effect of back-to-back European and Northern American tours, the ending of a significant relationship and other difficulties faced in her personal life, led to some much-needed soul-searching. This led to a period of cathartic songwriting. The end result of this turmoil is a beautiful EP which reflects the growth experienced by Clark during this difficult time.

I caught up with Imogen Clark last week to discuss the EP.

Congratulations on the EP. It’s a very strong body of work. Strength and growth is the big theme.
I’m so excited. It felt like it was in the works for such a long time.

It feels like a bit of a story of self-discovery. A discovery challenge is the core concept of it. It’s really interesting that I wrote so many of these songs last year.  It was a really tough year for me in so many different ways, but having no idea what this year was going to be like. I think it’s translated really well into what people are going through now. It’s interesting that this has kind of happened coincidentally. I hope that people will listen to it and get a sense of hope in a challenging year. That’s what I hope anyway. These are stories about challenge, but not wallowing in it, and hoping to be a better person for it.

The end of the relationship is referenced throughout the songs, but the focus is more on coming out the other side of it
Yeah, definitely. That was a big change for me with writing. I’ve written so much in the past about the qualities of the other person, the spotlight was on them. But with this EP, it focuses more on myself.

It’s different from my previous writing, it’s more internalized. Before it was about unrequited love, and things you can’t have, but now it’s focused inwardly in a way I don’t think I’ve done before, which is exciting to do for the first time.

It’s very brave to put down things out there which are so personal
Yes, it’s very scary, sometimes I think ‘what am I doing’ – it’s such a weird thing to be doing to put your feelings online and out there for the world, but I’m really glad that’s what I’m doing and it feels invigorating to share so much of yourself, to be breaking down the barriers.

Do you think it’s easier to write songs when you’re feeling down
Definitely, it’s one of those age-old questions of what writers say, what am I going to write about when I’m happy? Some writers are better at that than others. For example, we just got an incredible record from Taylor Swift, who is very happy for the first time in a relationship for a while. I’m not sure about myself. I’d have to test that theory out – which I never really have before. I like to make the sadness in my life into something productive, into songs. If I was happy I’d just be writing a different kind of songs, who knows. I’ll just wait for myself to get really happy to see what happens.

There are more classic sad albums than happy…
Absolutely – all my favourite albums are sad albums, like Blue from Joni Mitchell, which is an incredibly heartbreaking album. Not to say there isn’t a place for happy music. I listen to a lot of happy music as well. I think that comes out in these songs as well. There is an optimistic side to them, and a strength. It isn’t just saying that you are heartbroken, it’s saying what I feel like I deserve, instead of just emphasising the sadness. 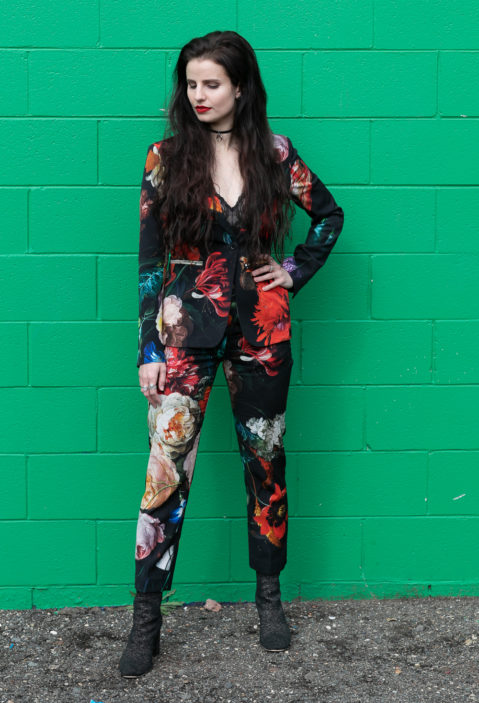 What were you listening to at the time?
I’m always listening to other music. It does influence my writing. As well as my staple loves such as Taylor Swift, Bruce Springsteen, Tom Petty and Joni Mitchell, I was listening to 1975, Maggie Rogers and Lennon Stella. They take this new perspective on pop music. It’s not bubblegum pop. It’s pop sounds that are rooted in songwriting with a lot of integrity to the core. We used a lot of those references within the studio. There are some 1975 vibes, some Maggie Rogers and that is the sort of path I want to go down as a songwriter. Versatile in the genre, but always rooted in storytelling.

You were heading down the Country path before, which you certainly can’t hear in this EP
<laughs> Not a banjo in sight. I love country music, but I never felt like I belonged there. It was a part of the industry which took me in with open arms, which I am so grateful for. It was a beautiful safe place for me to start my career. It just wasn’t the place where I wanted to be for my songs and as an artist. I’m glad to be broadening out, although I will always have a love of it. It feels like it’s not me. It feels great to be moving into a broader territory

That was a brave decision. You’ve chosen a harder route perhaps, especially in the US where it’s such a colossal segment in the market. You were finding your space there.
I look back on my first 2 albums and I think it suited them so well, and Collide was a crossover record, where there were some country-sounding songs, and some which weren’t. So it has been a gradual procession.

I plan on moving to the US, and a lot of people would say ‘what are you doing?’. It’s the biggest genre over there, but the older I get, the more music I write and the artists I’ve been listening to, I’ve realised that it isn’t fitting me, and I need to be true to what I want to be. And it’s great to be open and acknowledge the influences – many of the artists I love mix it up. They have albums which sound like indie-records and albums that are full-on rock. Springsteen, with Nebraska, is a folk-country guy, and he can do that. I love that. I want to be a female Bruce Springsteen, that’s all I’m saying. 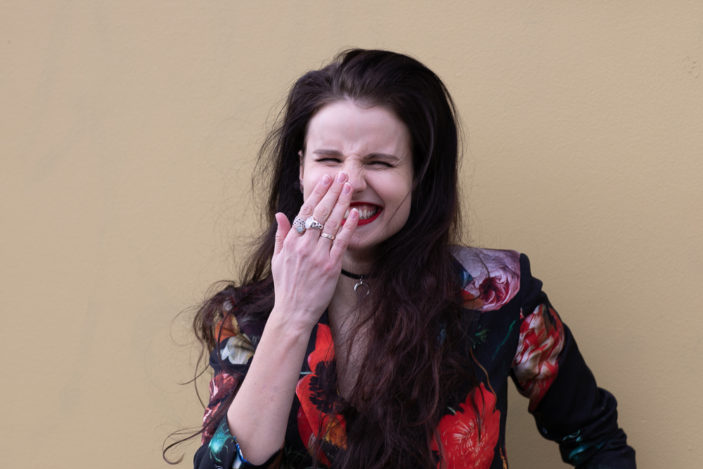 Kasey Chambers is a great example of this
Absolutely – and it’s great that she has been embraced for that. Absolutely, she’s had great success with the real Americana sound, and the rockiness to her- a great example and she has done well in the States, so we know it works well

You had some great people involved. Benmont Tench who was in Tom Petty’s band, The Heartbreakers
It was the best birthday gift ever. We started recording on my 25th birthday and it was a surprise to me.  My manager Jeremy (Dylan) cooked it up with our produced Mike, as a secret, and didn’t tell me until it was definitely confirmed. When he told me I just freaked out. He is from one of my favourite bands of all time (the Heartbreakers). I couldn’t believe he was going to be playing on my record. And Pete Thomas, who has worked with Elvis Costello for so long, who is one of the best drummers in the world.

To have these guys on the record was a dream come true. I couldn’t imagine the energy that they brought to the album, and it just wouldn’t have sounded the way it did without them.

You had some great songwriting collaborations, Emma Swift, Alex Lahey, Anita Lester, Clare Bowen – how was that experience?
This is the first album I’ve done which is predominantly co-written. Normally there are one or two songs, so this is new territory for me, getting used to co-writing. I’ve finally found the flow of it, working with the right people. I’ve tried it before and it didn’t really feel right, so for the first time I’ve got people on board who are so wonderful to write with. I felt like we understood each other and we were on the same page. I’m proud of the songs and the people I got to work with.  They all brought their own flavour to the songs and we wanted to keep that.

You have created some great videos for this EP. I loved the one you did for “My Own Worst Enemy”- Davey Lane, amongst others rocked
I’m glad that we were able to make this in lockdown. It was so fun to do remotely – I didn’t see any of the footage until it was all edited together, so all these beautiful people who graciously gave up their time for this, it was a bit of a who’s who of Australian music. Dave’s parts are some of my favourite – his deadpan expression. He is so talented.

Your Brisbane gig is cancelled due to Covid, but Sydney is still on?
Yes – so sad – hopefully we can do them later in the year

So, you’re planning on moving to Nashville still?
Yes, when it’s practical and safe. My plan is to be based there, and of course to still return to tour back home regularly. For the sort of music I want to make and the opportunities there, I feel it’s the right place for me.
The thing with Nashville is that it’s no longer just the place for country music. It’s for all kinds of music – there’s a big rock presence, indie, folk, pop, all coming out of there. It’s just a great place where musicians work and live.

And you’d have a solid crew of people there
Yes, Emma Swift lives there, my manager lives there normally, so it should be an easy transition

Have you experienced much in the way of gender bias in the industry?
What I found the most, lately, is that when you are a female songwriter writing about your feelings, you get labelled as emotional or hysterical, but there’s also a tendency for the same emotions to be rewarded in male songwriters. They get rewarded for being ‘so brave’ and ‘so vulnerable’, whereas with females we get branded the crazy ex-girlfriend.

It’s different now that I have an awesome team around me, but when you’re a 20-year old girl trying to stick up for yourself in a room with middle-aged men, that was challenging. But it’s a challenge which makes you tougher.

Finally, who’s your dream collaboration
Apart from Bruce Springsteen or Taylor Swift, I’d love to write with Maggie Rogers or Lennard Stella. Maybe one day, that would be pretty cool.

Thanks for your time Imogen, and good luck with the release of the EP.

All still images by Bruce Baker