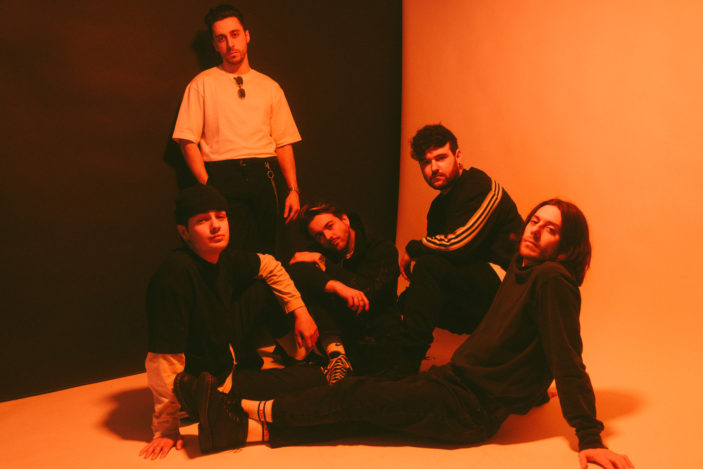 English emo punks Boston Manor have been super busy this year. On top of headline tours and support slots, the five-piece are also about to drop their fourth studio album Datura, out this Friday via SharpTone Records.

We had a chat with vocalist Henry Cox about the new album and upcoming tours just ahead of the album’s release.

“It was a long time in the making, this record. It’s kind of been bubbling away since the pandemic. Every fucking band says this, but I do believe in a lot of ways that it is the best record we’ve done.”

At a very accessible seven tracks long, Datura is the first of a two-part conceptual project predominantly written and recorded earlier this year. The idea for a double album has been of interest to the band for a while and the modern trend in music consumption was the catalyst.

“It’s part one of two. We’re big fans of the album format and still wanted it to be listened to as such, but it’s kind of depressing when you look at streaming statistics. You get down to about track eight and it’s like half the people stop listening. We just thought seven tracks was a really digestible amount and it’s only half of a double album, so you can’t say that it’s too short.

“We started to write the first couple of songs and they had a very noir, night-time feel and the concept came from that. We said, ‘Why don’t we set it all over one night’. We knew we wanted to do a double album, so the next part is the following day.”

Having only released the Desperate Times, Desperate Pleasures EP this time last year, Boston Manor are creating and touring as much as they can after emerging from the pandemic. With four tours and two projects already under their belts in the two years since, to say that their work ethic is impressive would be an understatement.

“A couple of the songs were written around the same time as the EP, but most of it did come afterwards. We had that two years off to kind of sit back and reset a little bit. From that, we were so energised that we just came out of the gate with a new producer and a lot of ideas. So we’ve just been recording as much as possible.”

The band explores some interesting sonic and thematic territory on Datura, with some of Cox’s most personal songwriting yet.

“A lot of the record is about my struggles with addiction – drinking too much and not taking care of myself. Just running around the globe having loads of fun since I was a teenager and not really taking stock of my own mental and physical health. I realised that I needed to start looking after myself a bit.”

Singles “Foxglove”, “Passenger” and “Inertia” are bold examples of their developed sound and are as poignant as they are catchy. These lyrical metaphors allowed Cox the freedom to express his deepest concerns for the world and himself without obscuring the personal message.

“I started to write songs that were pretty vulnerable, which is a new thing for me, and I’m not very good at that for two reasons. One because it allows people to relate to the song in their own way, but also because it gives you that protection. In doing so, it helped me work through these subjects, so it was very therapeutic for me.”

Boston Manor will be heading to Australia on a co-headline tour with California favourites Movements in March 2023, their first trip Down Under outside of an appearance at the 2018 Good Things festival.

“We love touring with those guys, they let us open for them in the States just before the pandemic and they opened for us in the UK at the start of this year. We had both been planning to come to Australia in 2023 anyway, so it definitely made sense for us to do that.”

The British punks are heading out on yet another tour today, this time across the UK and Europe with Canadian heroes Alexisonfire. These lads are some of the hardest working artists in their field and it doesn’t look like they will be slowing down any time soon.