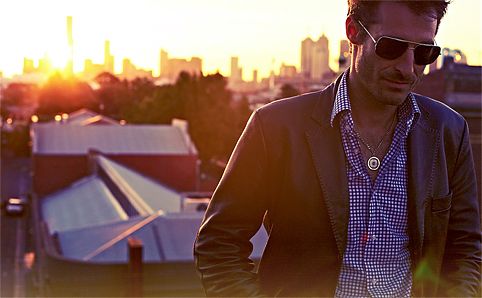 Lead singer of The Cat Empire, Felix Riebl has taken some time out to compose a solo album of acoustic, blues influenced songs. His album is called ‘Into The Rain’ and is out now. He recently spoke to Larry Heath of The AU Review.

How did this material come about and why did you decide on making this a solo project as opposed to a Cat Empire project?

Well, the fact that it’s not a Cat Empire project is pretty obvious to me and everyone that’s listened to it. It’s more or less a classic seventies rock kind of sound. In that, it has several electrical guitars throughout and has a lot of open choruses that play themselves and sort give off that big powerful sound. That’s very, very different to The Cat Empire.

The way it came about to me was kind of natural. I didn’t feel I had much choice other than to write this material but the songs themselves just came within a couple of weeks. I had flown to and from New York in ten days and was in a studio. It certainly wasn’t a planned venture to do this, but I’ve really felt very strongly about writing songs in my life. I reached a point where I had a collection of songs which were really placed in another world. They were all really personal as well and I felt they were placed in a whole another sort of atmosphere.

The album really just revealed itself in that way and I feel it really has a strong life of it’s own.

The material I have heard, it was surprising on first listen, and the second listen I loved it.

I think it’s that kind of album. It doesn’t have that obvious single on it, or that obvious sound on it that a solo project may suggest. It does, for me, have a storytelling aspect to it. The songs come from a really authentic place. That combined with the fact that really I am looking forward to playing in a band that sounds like a real classic kind of band. In that sense I am looking forward to playing something that’s a little more serious but also really qute adventurous. It really is some darker themed material that I put my name to as my own story.

I got to mention as well about the Hottest 100 Australian albums of all time. You have a few of your albums on the list. How do you guys feel about having your albums be embraced to that respect?

It’s a real honour I suppose, especially to be recognised in your own community. We are an Australian band and we have had a fantastic story here. We’ve truly have started in this country and moved into the rest of the world. It’s always hard to tell about our albums especially as The Cat Empire because we are so chaotic. The process of writing and being in that band just never stops. I never knew once we made album that they would take on a life of their own. They’ve travelled a lot through this country and through the world. I suppose you just write them and forget about them really. It’s basically all of us in the music really so much that you forget about the albums ourselves.

It’s really nice to be recognised in that capacity I suppose. I like to take it with a grain of salt as well. There are probably a lot of good albums that aren’t on that list that deserve to be.

Are there albums off the top of your head you can think of [that deserves to be on the list]?

I haven’t seen the whole list and I can’t really comment to be honest. I just know that there is a load of good music out there. It’s really lucky when you get onto something that funds success and popularity. It’s pretty wonderful as a musician to be able to play sold out shows and getting overseas to be recognised.

I suppose it’s easy to just assume that because there has been an element of success that it was just always meant be always like that. I think that there is, like, an uptake that happens in those years. It’s always important to remember those albums that aren’t on there that deserve recognition as well.

I imagine that this new material is giving you a bit of vigour to embrace a new sound after a few years with The Cat Empire.

No doubt. The feeling of being able to present these songs which for me [is] a very simple type of music with quite involved, complex, frustrated feelings behind them. I suppose the thing for me is that the music has this real openness to it and it can go really big and dark, and then go real intimate.

I’m looking forward to the challenge of telling that story and working with the dynamic with the new band. [I’ll be] revealing part of my own story, part of my own songwriting in a more close and personal environment. I suppose I am really nervous about it but I’m more excited about it as well.

So is there that feeling that the material is not just different musically but thematically as a more personal element as the material has in the past?

I think so yeah. There are a few crossovers in fact. There are a few songs that I wrote for The Cat Empire early on [which] were songs that were quite irregular for Cat Empire songs. They played their part, but I suppose there was a bit of quiet in those songs that reached a high epic point at certain times so that I could make them build via a very long period of time. You make it powerful through that slower burn.

Having said that, the nature of the two projects are very different and it’s a chance to make some sounds with a different context and one that I can put my name behind on so that I can say that this is a personal idea of mine.