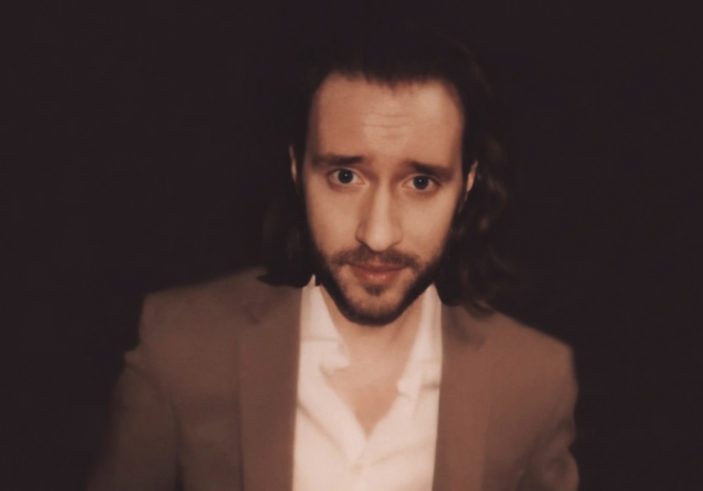 Eric Terino is a singer-songwriter based in the New England region of America. He has just released his third album, the beautifully haunting Innovations of Grave Perversity. The album, which errs towards the folkier end of the genre spectrum, features a whole host of sonically interesting instruments, and musicians from around the world.

To celebrate the release of the album, and to find out a bit more about Terino and his music, we caught up with him to chat about the album, writing and recording during COVID-19 and to discover some of his artistic touch points.

Let’s start with a quick introduction. What’s your musical backstory and how would you describe your sound?

Well, I’ve been making records for about ten years now and over the course of that time I’ve enjoyed exploring quite a few different sonic avenues. My debut LP (Mountains of Nothing In Love) was a DIY/Outsider Music/Punk-spirited sort of affair, then on my sophomore album (Champagne and Childhood Hunger) I delved into more Shoegaze-y/Indie/Alternative territory.

With my latest LP the terms I’m hearing most frequently are Freak Folk, Art Rock, and Chamber Pop. Though I must say these labels aren’t really of my own consideration. Those are just the terms reflected back at me when the music gets put out into the world.

Any and all of these genres sound just fine to me, but thankfully the general consensus when people are first introduced to my work is: “I’ve never really heard anything quite like this before.”

Congratulations on the release of, your third album, Innovations of Grave Perversity. What was the inspiration behind the album?

Thank you very much! I’ve had such a beautiful experience with the release of this record, not to mention how life altering the process of creating it was.

The initial inspiration for Innovations of Grave Perversity was this overwhelming sense of change happening in my world. I’d been through a series of significant traumas over the course of my life, and I felt as though I was finally seeing that there could potentially be light at the end of this tunnel.

So I started with a song called “Felt”, in which I detailed where I found myself at the beginning of this journey. I was plagued by fears and insecurities but determined to find my way to a brighter, more hopeful life.

So that’s how the album opens, with a statement about where I am and where I hope to go. From there the record follows the transition from that place of despondency into a realm of potential for joy. I used the metaphor of the seasons changing from winter to spring to reflect that, which in fact was happening in real time as I was writing and recording the album.

What would you say is the album’s overarching theme or message?

The primary message of Innovations… is that it’s never too late to turn things around. No matter how deeply we’ve been impacted by the traumas we’ve experienced, or how dampened our spirits have gotten from the weight of our anxieties, there is always a path through that to a healthier more joyful existence.

The record delves pretty deeply into the intricacies of what that journey entailed for me. On songs like “Boulder” I speak about the battles I’ve faced as a person who’s dealt with mental health issues for the vast majority of my life, specifically agoraphobia. I also touch on aspects of aging and childlessness, and what that means for an LGBTQ person in this present day.

I even look back on the experience of coming out as a teenager and how that’s shaped the person I’ve become in a song called “A Snowfall at Dusk”. That was inspired by a time when I was sitting and watching a light snowfall begin as the sun was setting outside my window. It took me back to the first time I’d ever fallen in love and that first winter I spent with this boy in hiding. We both came out together eventually, and having an experience like that really shapes you as an adult. It’s something I felt was important to write about, as even today there are so few artists speaking openly about subjects like this with any kind of emotional depth.

I found that in my desire to move forward and to not be chained to the past, I had to see how those periods had impacted where I found myself today. Which is why the record closes with “I Didn’t Live There”, which is a song about how ultimately we aren’t defined by our experiences. We carry our homes within ourselves.

The album was written and recorded during the height of the pandemic, what influence do you feel the COVID-19 situation had on the whole process? What challenges, or surprises did it afford?

The pandemic actually afforded me a lot of opportunities in the process of making this record. Because so many musicians were unable to tour during that time, a lot of people were open to the idea of recording remotely or contributing to other artists’ work.

So, I was very fortunate to connect with the legendary American singer/songwriter Jolie Holland and have her contribute some beautiful vocals and violin arrangements for this record. She’s been one of my musical heroes for all of my life, and to be able to work with her on this project is something I’ll forever be grateful for.

But I also found an incredible pool of talent all throughout the world. I worked with trumpets in Italy, violins in Russia, cellos in Ukraine, harps from England, the list goes on and on. Working with all of these artists was such a rewarding experience, and they truly helped bring this record to life. Without the circumstances the pandemic presented, perhaps it would’ve turned out to be a very different sounding album.

Now that you’re three albums in, has your approach to writing and recording changed compared to your previous work?

It has changed quite a bit, specifically with this record. As I was just explaining, I worked with a lot of outside musicians on Innovations…, which is something I’d never done before. On my previous two LPs I’d done everything entirely on my own. I’d play every instrument myself and use various electronic manipulations to flesh out the production of those sounds. But for this record I really wanted to work with only live organic instrumentation, no digital or artificial sounds whatsoever. So that made for a very different recording experience.

I think the writing process has shifted slightly over the course of the last 10 years, but generally that intense solitary period wherein the songs find their way to me is always the same. The circumstances surrounding when it happens are all that ever changes.

How do you approach the songwriting process more generally?

It’s difficult to explain, most songs begin with a melody. I typically find myself sitting down at a piano and just playing around until something reveals itself. Once a melody starts to come into focus, then I begin either writing out passages or singular words that feel appropriate to where the piece is going. Basically, it’s a refining process, like carving a sculpture from a block of marble. You just keep chipping away at it until you find that you’ve shaped it into exactly what it wants to be.

If you could recommend an album, a book, and a film to fans to better understand Eric Terino, the artist, what would they be? and why?

That’s a very interesting question. I recently read Hermann Hesse’s Siddhartha after a copy was sent to me by a friend. I think there’s something so universal about that story. I certainly related to the transitory nature of his life and how he found difficulty reconciling the shifting of his values as the circumstances of his life altered with age.

Though I’d also recommend Marianne Faithfull’s 1994 autobiography (Faithfull), which at one point in my life I carried around with me like a Bible. It feels a bit strange to suggest someone else’s autobiography as a means to better understand my own life, but I’ve always felt a connection to the strength of will and determination to create great art that Marianne has displayed throughout her career.

As for a film; that’s a bit tougher. There are so many great films I’ve felt strong connections to over the years. I suppose what springs to mind at the moment is Mark Thiedeman’s Last Summer. It’s a very simple love story between two young men as they spend their final summer together before one of them leaves for university. It’s almost like an Andrew Wyeth painting through the lens of an indie film. There’s something about the simplicity of that story, the beauty of the landscapes, and the quiet honesty in their romance that speaks to who I am as an artist and as a person.

As for an album, I must say that nothing will do a better job of expressing who I am as an artist than Innovations of Grave Perversity. I’ve put a great deal of myself into this record and I think it really paints an accurate portrait of where I am at this point in my life. I was actually just speaking with someone recently who heard the record and had never met me before who said, “I feel like I know you much better than I probably should now.”

What’s next for you?

Well, at the moment I’m working on putting together a little collection of demos and live tracks from the Innovations… sessions that I hope to release sometime in the not too distant future. I’m still primarily in the thick of promoting this record and working to do my best to get it out into the world so that it can live freely, and hopefully find its way to people who will hear these songs and connect with them. Ultimately that’s my main objective, to create work that connects with people and allows the listener to see something within themselves reflected back. I believe as an artist that’s such an important part of what we do, using the process of creating art to help highlight the universality of our human experiences.

Innovations of Grave Perversity by Eric Terino is out now. Grab yourself a copy from Bandcamp HERE.