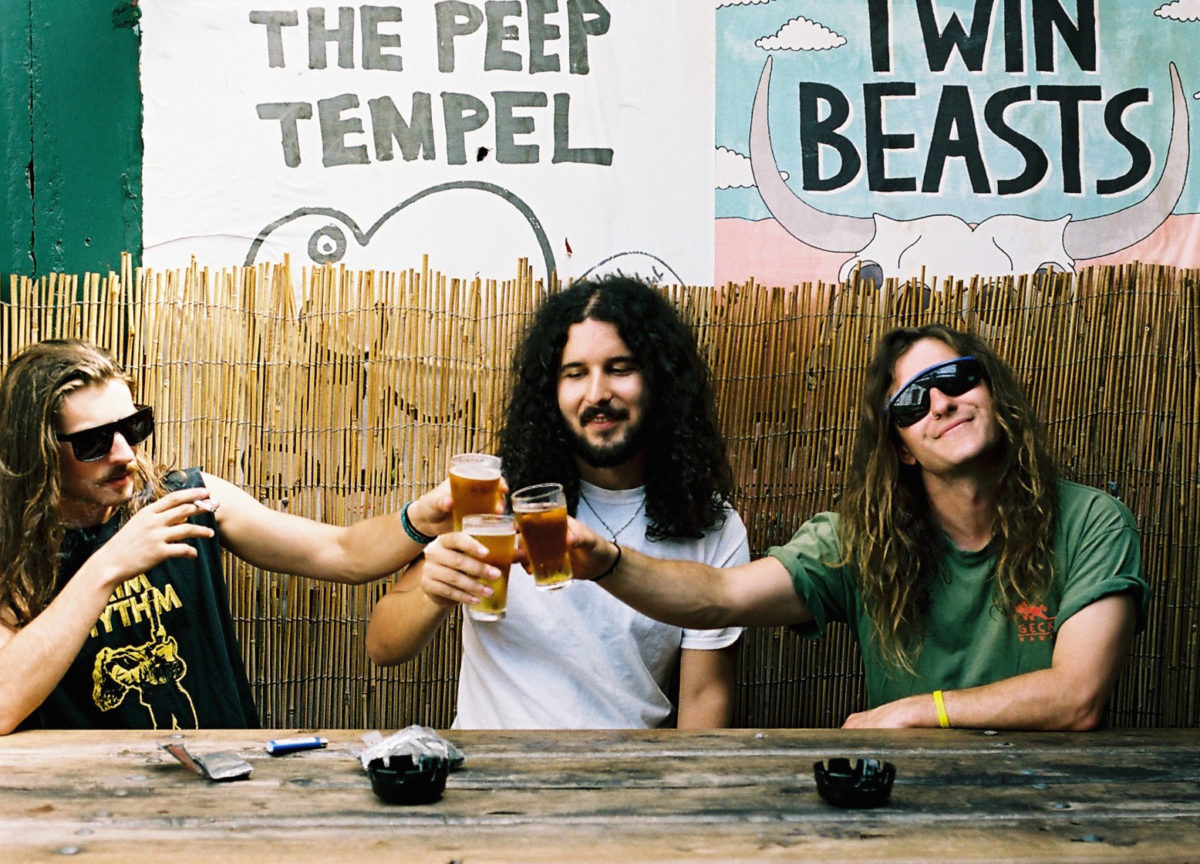 While I was walking out of the 2018 Cal Jam Festival in California – the one that was curated by the Foo Fighters and saw Nirvana reform – I bumped into the Melbourne band Cosmic Kahuna, who had played the opening night of the event alongside the one and only Billy Idol. When we both got back to Australia last month, I caught up with Doz from the band to find out more about how the opportunity – which saw the group added as a last minute addition to the festival – came about, what the experience was like and what is planned for the band in the near future.

Let’s go back first to the start of the year. You play with the Foo Fighters in Perth. How can you sum up that experience now looking back on it?

It was completely surreal… To go from playing pubs across Australia to getting thrown onto a bill with Weezer and The Foos in a bloody stadium was just incredible. The quality of the production and the size of the stage was something we’d never experienced before. The sound and the vibe was so good and we played a great set to a fair few people who seemed to really dig it. The day just totally ruled.

Flash forward three quarters of the year later and the band is asking you to play at their festival. That must have been a bit of a surprise? How did it all come about?

After our set The Foos invited us into their green room to hang and knock back a couple of cold ones and to hang out… We had a bit of a chat about the things you’d expect a young starstruck band to ask about: guitars, Seattle in the early 90s, partying and all that sorta stuff. Turns out Pat Smear is a bit of a bird enthusiast and dug the King Parrot shirt Adam was wearing, hopefully we turned him on to the band! After a bit of chit chat Dave invited us to come over and play Cal jam ensuring it would go off… And he certainly was not wrong.

So you’re invited to play… but being invited to play a show in America with less than a month to spare comes with its own logistical challenges. How were you able to make it all work?

Man, that was one of the toughest administrative tasks I’ve ever experienced. After we got locked up at the border of The UK and France on our European tour we certainly did not want to leave anything to chance, especially for a show this incredible. Getting approved for a US Performance visa is no easy task… Not only ascertaining the documentation to fulfil all criteria to have your application reviewed is tricky, you also have to be approved by 3 separate tiers of immigration and then only hope you receive your visa approval before the scheduled performance date. It was rough I tell ya, but it was 100% worth it.

You were sharing a stage with Billy Idol on opening night, what was the experience like? How did your set go?

It was a little nerve racking at first. Both because it was our first ever performance on American soil and the fact that crowd was easily the biggest we’d ever performed in front of. We were second band to play on the Friday night and the group before us totally ripped so we definitely had our work cut out for us. Plugging in before we went on we all were feeling a bit jittery until we noticed that in the crowd there was a dude wearing a Private Function t-shirt (y’know, the one with the Neighbourhood Watch logo where the cop is smoking a ciggie) and after that it felt just like home. Our set went off! Easily the most wild crowd we’re ever performed to. At about 3 songs in a circle pit formed that seemed to hang around for the duration of our set and it felt like at every interval of silence throughout the set was met with ecstatic jubilation from the audience. It was a total trip, couldn’t have asked for a better instruction to the American audience! I just can’t wait to do it all again. Billy Idol was rad too, he was going hell for leather with wall to wall bangers that kept the atmosphere electric. Would have loved to have said g’day to him but he bailed right after his set, I guess he is an old fella… Geeze he was good though.

You got to see a lot of other amazing acts perform. I mean, we witnessed a bit of history with the Nirvana set. Gang of Youths smashed it. Iggy freakin’ Pop. What were your highlights?

For me it was definitely Nirvana. I mean, they have always been one of my favourite bands and the mere concept of any type of reunion was never even considered a possibility. It really brought back that feeling of… pure love of music, like being a kid and going to your first rock concert. It just felt like such a privilege to witness that and I felt like the luckiest person in the world. God damn it ruled so hard. Garbage was another huge one for me, ‘Vow’ is one of my first memories of music and finally getting to see it live was epic. Foos smashed it (of course) Greta Van Fleet lived up the hype and slayed it. METZ were insane. Kingfish has to be one of the best guitarists I’ve ever seen. Iggy was great, they did a cover of ‘Heroes’ that reminded us all of why him and Bowie are so iconic. Tenacious D were incredible. Deer tick and Slaves were also terrific. With three stages going it was hard to catch every great moment and it felt like there was something amazing happening everywhere you went.

Backstage we were surrounded by rock gods. I know I found myself standing between members of Weezer and Eagles of Death Metal, and Jeff Probst randomly (because of course). What was your most surreal encounter or moment of it all?

I got to briefly meet Butch Vig and Shirley Manson after they got off stage which was pretty incredible, The highlight would have to be hanging out with Jack Black on the Saturday though, he’s as every much a legend off screen as he is on film. He loved our band name so much that he shouted: ‘COSMIC KAHUNA’ and karate chopped air in true Jack Black fashion. I think we all felt like those nerds that can shred in School of Rock at that moment! We made tons of friends getting around the festival and spent a bit of time with Uncle Dave on the Friday night when he wasn’t focused on playing two sets. We also met a few old blokes getting around that told us some stories from the original 1974 Cal Jam and the US Festival which was pretty cool. They sure do love their rock n roll over there in California!

What else did you get up to in the US?

After the festival we fanged it up the 101 at 100 miles per hour to play a show in San Francisco the next night. That was epic, even though the show was quite small compared to Cal Jam we had a bloody fantastic time and the crew were all legends. We stayed up there for a few days and took in the sights and then returned to LA for a few days before we all split. We just got up to the standard rock n roll tourist itinerary: Got drunk on The Sunset Strip, bought guitars from pawn shops, shot guns, ate hamburgers, lamented LA traffic, heckled celebrities… The standard trip. Since we’d just returned from a European tour we were pretty broke and could only stay in California for just over a week before returning home… Really looking forward to coming back in the near future and seeing what the rest of the USA has to offer.

Talk me through the rest of 2018? What’s it holding for you?

Well we’re just focusing on writing at this stage, we’re halfway through a second album. Got some exciting new tunes in the pipeline and really looking forward to breaking em in to the world in the near future… Other than that we’re keeping pretty quiet for the remainder of the year. 2018 was huge… Its going to be backed up even harder in 2019 so look out!

For more about the band, head to their Facebook Page. And you can listen to their music on Bandcamp.