While many bands are postponing their releases,  New York duo Diet Cig are delivering us a gem of a record in Do You Wonder About Me? this Friday.

I caught up with the band over the phone last week to chat about releasing the album in these difficult times, and how they’ve leveled up in everything from its production to the denim laden photo shoot that adorns the cover of this article.

When we last sat down, it was on the Sunday after SXSW – we were all absolutely exhausted. Now, in theory, we should be well rested right?

Alex: Yeah I still feel like we’re only half awake at the moment *laughs*. It’s a different type of dreaming state we’re going through at the moment.

Are you able to find a routine at the moment? Because I’m useless at it.

Alex: *laughs* We’ve been trying to keep a routine. It’s been a little easier because we’ve been so busy lately, it’s been forcing us to have one. This past week we volunteered at a local art non profit, where we signed up to make face masks. So it’s nice to be held accountable for something and get dressed and be in a place where people can see you *laughs*. So it’s definitely been helpful, and some of these interviews weve been doing. We’ve been trying to keep a routine.

Were the masks made of denim? There’s a beautiful Justin/Britney esque affinity to them in your latest photos.

Alex: So that shoot was actually the first time we’ve ever hired a stylist. And she did such a great job, and it was so great working with her. She was like, “I’ve got an idea for a look, just go with me on this”. And we really did go all out on the denim.

I’m all about the denim so I love it.

Do you feel like you’ve leveled up by getting a stylist for a shoot?

Noah: Yeah maybe a little bit. There’s definitely a lot more moving pieces now, and we can afford to do it and have the opportunity to do it. So it feels kind of cool to have a camera crew, a stylist, hairdresser, lighting crew, photographer. It feels like we’re about to go onto a movie set or something. There were racks of all these different outfits that I would never have even thought to try on. It’s fun.

Alex: Yeah it’s definitely fun. It’s really new terroiroty though. It’s almost uncomrfotable at first, to have someone telling us what to wear. We were like, we love wearing overalls! And they’re like, maybe we don’t wear overalls this time! *laughs*

So our creative collaborator, Emily Dubin, she shot all these photos. She was also a creative director on the shoot, and definitely pushed us out of our comfort zone on the shoot, which was fun and challenging. But I feel we got really great, next level stuff because of it. 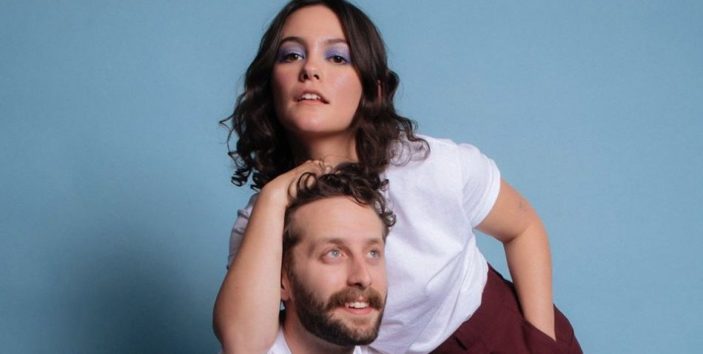 Speaking of next level, the new record really is a step up. Alex your voice has never sounded better and the production is phenomenal – balancing that grittiness we’d hope for with the improvement of production one would expect from any sophomore release. Can you talk a little bit about recording the album, who you worked with and how it compared to what has come before?

Noah: We were fortunate to work with Chris Daly who we worked with on our first album (Swear I’m Good At This). But going into this new record was kind of a different approach. Because, when we did that record we were on tour a lot more, and we wrote in between tours, when we could. We were going, going, going.

So with this record, we didn’t want to feel that constant motion. We took most of 2019 off touring to focus more on the writing and make it more about that process, and to sit with it more. So when we got together with Chris Daly to work on the record, I feel like we had more of an idea going into it, rather than making it up as we went along *laughs*. Well we still definitely did that a bit too.

Alex: We definitely thrive when we’re collaborating with others. We weren’t just throwing it together. Instead, we came in with these ideas, and it was nice to have a third ear on it. We love working with Chris, so it was great to have that familiarity from that last record. We work well with him and trust him, he’s just an incredible producer.

But this time around, as Noah was saying, we had more of a time to work out what it was going to sound like. We got to record at Head Room in Philly, and did our basic tracking with Kyle and Joe who run the studio. We spent a lot of time with them working on guitar tones, and drum sounds. I think Noah and I both really knew what we wanted out of our tones this time around. I think every time we’ve gotten to record we know a little more what we want, we’ve learned more about our instruments. So collaborating in this new space with our long time producer, we were really able to flesh out some new stuff while keeping that familiarity.

You’ve gone deeper lyrically as well, reflecting on yourself in a way that I think will prove these songs quite relatable for a lot of people.

Alex: Yeah we worked hard on the lyrics and I’m normally a pretty private person. So we worked together to really refine those ideas and fill in any gaps, sharing them and working together always has the best results. It’s really cool to get to get to work with everyone. And I feel a lot of the lyrics are really relatable to this crisis. “Priority Mail” is a song about mailing your friends things because you can’t see them. And “Broken Body” has a verse about not being able to leave your house and being depressed because of it (this related to Alex’s time housebound due to an ACL injury and consqeuential surgery). So it’s weird listening back to the songs now and feeling it’s weirdly relatable with everything going on.

And “Night Terrors” is something I feel we’re all dealing with at the moment.

Alex: Yeah I’ve been reading that people’s dreams are extra intense right now, because our minds don’t have enough stimuli or something? And yeah everyone’s having crazy, vivid dreams. So I thought that was really interesting.

One thing that’s a byproduct of the pandemic too is that you’re not able to tour the record. Did you get to play any of the songs live before we had to jump off the road?

Noah: I think we had played two of the songs off the record, “Thriving” and “Who Are You?” (notably the first two songs off the record). But, we didn’t play many shows in 2019, so we didn’t really get a good chance to play them in our set. So a lot of them are so fresh we haven’t put them on the stage yet.

Alex: Right before everything happened when we were planning to tour, we had just done our first ever rehearsal with our new bass player, and were so excited bcause the new record has a lot more melodic bass lines. In the past, it was just the root notes following along. But this time, Jamal Ruhe who actually mastered our record, we asked him to come in and play bass, and he just shreds it, and did some really interesting stuff.

And then we got to rehearse with our new bass player Lucy, and she absolutely killed it. She was playing everything on there and adding her own stuff to it too. Oh man I wish we could be on tour now! Because we were just going to be able to expand our crew in a way that we were really stoked on. But you know, we’ll get to do it… eventually… hopefully. It’ll be really good when we get back out there.

Since you’re able to isolate together are you able to jam much?

Noah: Yeah we live in the same place which is definitely helpful and fortunate. We’ve gotten to do a few live streams, and some fun stuff on Instagram, YouTube and stuff. So we’re trying to adjust and make the best of the situation and still try to stay connected to our fans with the record coming out very soon.

Alex: Yeah we’ve been doing a lot of the live streaming stuff. It’s been fun to push ourselves outside our comfort zone sonically, it’s a lot of acoustic stuff and keys which we never really do. So it’s definitely been pushing us to new places as we do it together.

I am curious with what sort of albums will come out of this from different acts around the world. People trying to be creative in difficult circumstances and limiting environments.

Alex: I think there’ll be a big influx of home recordings, even for us we will definitely benefit from recording demos for new music. We’ve been experimenting with microphones… I think we’ll come out of this with a lot more home recording knowledge. Which will be really helpful moving forward. 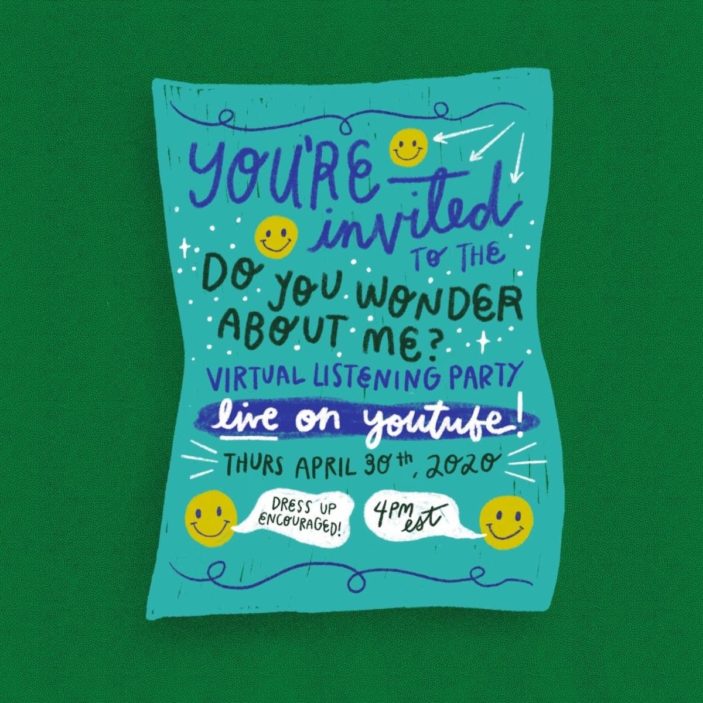 I know you’re doing a YouTube live stream of the new album on the 30th, which I’m looking forward to. But looking at the digital landscape as it stands, especially in this time of crisis, what more needs to be done to support musicians at this time?

Alex: I think there are a lot of things. We’ve all been jumping on these free platforms to play music, like Instagram and Twitch, and it’s been really cool. We’re all standing in solidarity with one and other. But I think it’d be cool to start to normalise ticketed live virtual shows. I know they’ll never compare to the income an artist would make from a live tour. But, it would be cool to have a supplemental income from the virtual shows we’re all working so hard to put on.

But that calls upon listeners to contribute. Something that also needs to happen, and a lot of other artists have relayed to me, is that industry giants like Spotify and Apple Music and Tidal need to step up and pay more per stream. Because, right now that’s the majority of our income. And a lot of these companies are doing initiatives to fundraise for artists which is great. But, if those companies actually spend their own profits on artists rather than putting the onus on the listeners to pay the artists.

Do You Wonder About Me? is out on 1 May via Frenchkiss Records.