Interview: Dan Mac of Art vs Science talks the making of Big Overdrive ahead of Wine Machine Festival 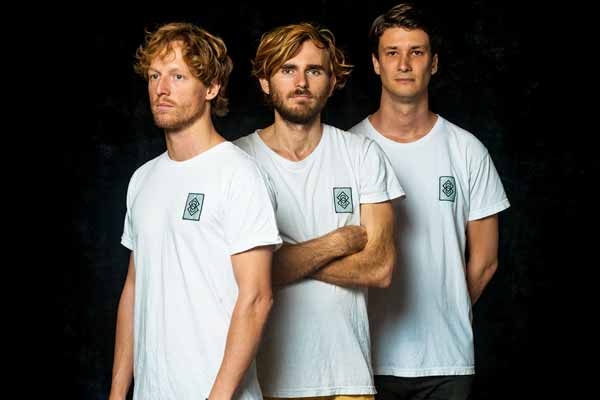 After finishing an Australian tour on the back of the release of their latest album Big Overdrive, Art vs Science are heading to South Australia’s McLaren Vale for Wine Machine. We caught up with Dan MacNamee to chat about the making of the album.

How does it feel to be back on the road?

The new songs are really going well. There’s a lot of energy from the crowd and I’m pleasantly surprised that they know so many of the tunes. We spent a lot of time making the setlist really flow, tweaking it. I think the new songs come at a point in the show where we’ve had a few bangers. It’s a bit of give and take. It also fits into a groovier sort of pocket than some of our earlier ones. You look up and wonder if people are into this, and they sure are. They’re dancing. Not moshing, but dancing. It’s nice. Feels good.

I was listening to the album in the car and thinking that it fits in well with the Art vs Science style. There’s dancier stuff and some slower stuff.

Yeah, it’s different but it lives in our universe.

What sort of challenges did you have, making the album?

A big part of it was overthinking it a lot. It’s very easy to try to make things perfect, but never quite getting there so not releasing it. The whole not being able to play anywhere. I was out of Sydney as well over COVID. We reached a point where we had been working on this for years. We had to put out something. Thankfully there was a lot of good stuff, so we had to leave a few out. But we couldn’t leave it any longer. Everyone is having babies and stuff. Put out some music.

“Sweat” was the first release from Big Overdrive, and I think that’s my favourite song on the album.

I think part of making the album was changing the way we were expected to write and record. That one, I pretty much wrote most of it. Then Kim Moyes from The Presets did pretty much all the beat production, which was completely different to how we used to do it.

It does have that “Preset” feel to it.

They were idols of ours growing up so that was fun to have him involved in “Sweat”. But that was just a drum machine jam during lockdown. Jim prompted me to make something from “In Da Club.” I gave that a crack and came up with the riff, wrote it all on an Elektron Analog Rytm, which is a fun drum machine, and then Kim put his own production on it. He kept the riff, kept the bass but put in his drums.

Sometimes the simple songs are best.

Absolutely! Look at “Flippers”, one of our early ones. Simplest song you could imagine. The main premise of the riff is one note. It’s just a cool sound with a straight beat.

That’s what people expect. They don’t want to overthink things.

Exactly, but we’re hyper-rational creatives who think that every song has to go on some strange, twisted journey. After a while we just go through the hard drive and find one that’s nearly finished and put out that one.

So, does that mean you have some songs left over for the next album?

We do, but it opened the door to a lot of processes that previously had been banned. Like “Check the Boombox”; I produced that with Dan the drummer. For a long time, we thought we couldn’t release it because Jim didn’t play on it. But then we thought that yes, we can. Why not, just do it. Just take the rule book out. For a long time, I think that we were quite stifled by the idea that a song should be entirely democratic from conception to release. It’s like three people in a kitchen: one person’s trying to make spag bog, one’s trying to make a Thai curry and the other one thinks it’s cornflakes. They’re all trying to put it in the same bowl. Someone has to say tonight it’s spag bog, so if you want to help you can chop some basil.

When you think about The Beatles, they all had individual songs.

Exactly. I really like jamming with Dan, the drummer. It’s my favourite way to write and how we wrote a lot of the earlier Art vs Science songs. Me, sitting in his garage, with a keyboard plugged into a guitar amplifier. Once it’s written, get Jim in and he adds some flavour.

How did COVID change the way you wrote songs?

Jim and I were writing a bunch of songs by ourselves and sharing them back and forth. I know a lot of what I wrote, except for “Sweat” never saw the light of day. To be frank, Dan wasn’t that keen on them. Which meant I would have to do the drums myself. I tried producing them with Jim, but they weren’t landing. They’re sitting on a hard drive waiting for the right producer or the right moment.

Musicians always seem to have way more music stored on hard drives than what gets released.

Well, it’s so easy to start a new one. Turn on a keyboard and push one note. I started doing a thing called lucky dip, where I’d set a timer and choose an instrument. I’d have to make a song in half an hour. It’s not that hard to do. You can end up with an 80% formed song. The finishing is what can take a lot of time. Although I don’t think it has to. I look at King Gizz and they’re so prolific. From what I understand about their workflow is that the re-recording is minimal. It’s a lo-fi kind of aesthetic, it’s full of vibe and distortion, but that’s the goal, I think. Some people love a well-crafted song. I do appreciate that, but what a love in a recording is loads of sonic character.

What I like about your sound is that it has that raw edge to it. It feels real and when you move from the recorded sound to live there’s no real loss of fidelity.

Exactly! Dan’s a sick drummer for a start, so it’s nice to put a bunch of mics up and run them through a bunch of guitar pedals. Because he’s so tight to start with, you can mess with the sonics of it and it won’t fall apart. It just adds to it. You hear the harmonics of the snare and the sound of the room that it’s in, so you start to overdrive it. I find that fun. Like The Beatles, I like the way you can write melodies and structure interludes and interrupt the composition mechanics. I’m actually from a heavy metal background, I love people playing live really well in a sonically interesting way.

True rock and roll is that feeling of getting lost in the music.

Like Bon Scott and the AC/DC era; find a good sounding room, wait ’til the vibe’s right and put it down in a couple of takes, or even one take. You’re taking a picture of a moment as well, which is cool.

Art vs Science are playing the South Australian Wine Machine show this weekend. Is this your first one?

We’ve done a few Wine Machines. We did Snow Machine as well. The Fellow who organises it, “Muz” at Falcona, is a friend from school, actually. He’s been kind enough to invite us on this rolling carnival a few times. His M.O.B. being “I want to have a really big party with all my friends, so let’s find a way to do that and get paid.”

Cut Copy’s a sick one. I haven’t seen them for ever. That will be really fun. It’s the last show of the year for us, so I’d like to extend it a bit. There’ll be a lot of old muso friends, so I’ll give it a little tickle.

There’s a positive vibe in the air now that music festivals are coming back.

Festivals are so good. That’s why we got into this game to start with. They still feel good to go to. There’s something unique about tens of thousands of people all gathered to listen to music. Meet new people, hook up with new people, dance, feel free … all that kind of thing. It feels oddly tribal. I remember riding past a flock of corellas in Centennial Park once. There must have been a new patch of particularly tasty flowers. It was just like a festival for them. There must have been about 50 of them. Some were trying to mate. They’re flapping around, some were fighting. It was popping off. There’s something about that with humans together. I don’t know why we do it, but it just feels good. It’s good that we’re finally allowed to get things going again. We did Wine Machine in Newcastle, and it was sick.

Tickets for Wine Machine at Serafinos in McLaren Vale on Saturday 17 December are available here.