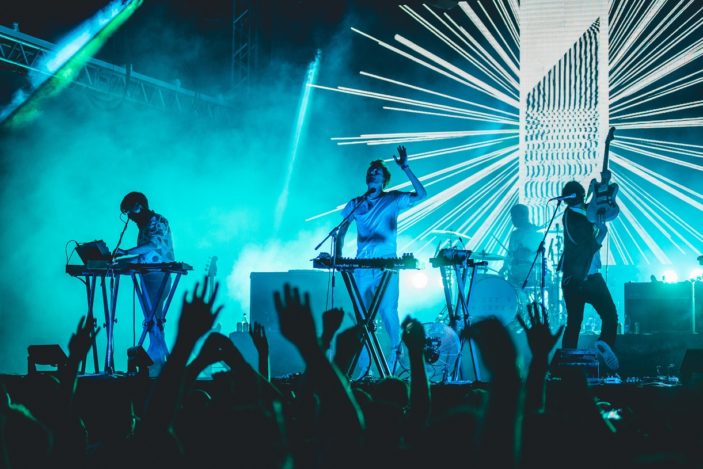 With half the band residing overseas nowadays, it’s been a long wait between shows in Australia for synth-pop veterans Cut Copy, who are among the headline acts at Wine Machine festival which starts on Saturday in Perth.

The four-piece have made up for lost time in 2022, spending April and May touring the United States, before jetting to Europe in October and November for shows in Ireland, London, Netherlands, France, Spain and Portugal.

But now all four members are back together in Australia and ready for a rare run of shows Down Under, which Cut Copy frontman Dan Whitford chatted to us about it, along with life on the road, new music and becoming a father for the first time less than 12 months ago.

Gday Dan, thanks for chatting. Now this upcoming Wine Machine tour is a very rare chance for the Cut Copy crew to play shows together back in Australia as I know a few of the band live overseas nowadays?

Yeah, it is. It’s one of those weird things where because we’re all from Australia originally and started out the band together in Melbourne, we’re perceived as a local act. But actually, we’re not really.

It’s actually quite hard for us to play shows in Australia. There are two of us living in Melbourne, but there’s one guy (guitarist Tim Hoey) in New York and one guy (bass guitarist Ben Browning) in San Francisco, so to play a gig, we’ve got to get on a plane and go halfway around the world.

You’ve been making up for lost time after the COVID restrictions –  playing shows everywhere!

It has made a nice change from COVID lockdown travel restriction times where we didn’t see each other probably for a couple of years. It’s a bit of a surreal experience, these guys I’ve spent so much time with and almost feel like family in a way. You spend so much time together and then to not see each other for a couple of years was an odd kind of turn of events. But once we did meet up, it was like old times within about 10 minutes. I felt like we hadn’t lost anything.

I know you’ve had shows all over the place, from the United States to Europe etc, how’s all that touring been and are there any highlights?

I can’t give you one sentence to answer that! We’ve been to a whole bunch of places and we’re going to South America early next year as well. We’re trying to get to all the places where we’ve had great shows before, and also a few new places as well. We’ve been around for a long time and done a lot of touring over the years internationally, so there’s an existing fan base, and a lot of places, we’ve had great experiences in the past. So in a weird way, it’s been great getting back to places that we’ve loved visiting and finding that the vibe was still there, and finding that COVID hadn’t dampened that and people want to come out and see music and enjoy themselves. That was invigorating in a way. Probably a year and a half ago, no one was quite sure what things are going to be like coming back to live music again, and touring and all the rest of it.

For us getting to play big shows in New York and LA and London and Southern Europe, which has always given us really strong support going to Spain and Portugal, so getting back to some of the places where we’ve just really loved being in the past and finding that magic is still there. There are people just chomping at the bit to come and see our shows. It’s a really nice feeling to reconnect and just also get feedback on music that we haven’t gotten to play live up until now.

How do you find touring life nowadays, you’re a father now and no doubt a bit wiser and more mature these days?

I guess our lives are very different now. Definitely different to the early days of the band, but even in the last couple of years, there are a couple of us that have had kids for the first time. Three out of the four of us have got kids now so our domestic lives are very different. So heading out on tour, you’ve got a different sense of responsibilities. Your mindset changes a little bit. It’s still super fun to get out and play shows. For us, we’ve always been good friends, so it’s like going on a bit of a trip with your mates as much as doing your job.

It’s good to blow off a little bit of steam still, but we’re probably not as rowdy as we were in the early days, certainly. I think, probably just the hangovers, we struggled to recover from quite so well, so it’s probably just self-preservation as much as anything. 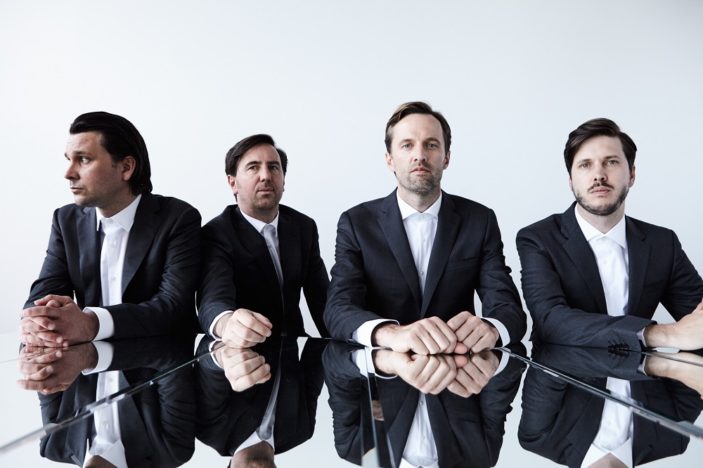 Haha I know that feeling. Probably a few FaceTime calls back to the family nowadays?

Absolutely. It’s nice to be able to stay connected. I remember in our early days it’d be buying these overseas phone cards when we go on tour, so we could talk to our girlfriends back home, and that kind of thing. You’d have all these weird troubles, getting through or you’d run out of money halfway through, or these sorts of things. It’s so much easier now to stay in touch, which is great, particularly with obviously having young kids. It’s really nice to stay connected.

I just had my first child at the end of last year, so he’s almost one year old now. So it’s been sort of a busy year on a number of fronts!

Absolutely, thank you. He’s just starting to crawl and do all that stuff. So that’s a whole other ballgame. Now, we’re chasing after him around the house, so it’s a fun activity.

I know you were living overseas too, over in Denmark, in the making for your last LP Freeze, Melt. How was that?

Yeah, I was over there for three years for the writing of the last record and making the whole record. Definitely a change of scene from Australia. Very different kind of place. But where I was in Copenhagen is it’s a super livable city, and lots of awesome stuff from an art and music perspective to check out all the time. It’s a pretty inspiring place to be.

So what led you to Copenhagen specifically?

I guess I’ve always had this idea of living somewhere else for a while and my partner and I just decided to head over there. We just thought it would be a cool spot to be in. Obviously, with what we do, there’s no real sort of restriction of needing to be in a particular place. Obviously, other guys in the band are living in other parts of the world anyway, so we just thought, let’s relocate. From a music perspective, just have a whole different set of influences and a different environment that filters into the music that you make, which I think definitely was the case in the last record.

Now let’s talk about the upcoming Wine Machine tour, where you’re playing alongside a heap of awesome bands, including Flight Facilities, Lime Cordiale, Jungle Giants, San Cisco, Client Liaison and many more. What do you make of the bill?

It looks super cool. We’re just stoked to be a part of it really. It’s one of those festivals that has been building a reputation over a few years now. I feel like a lot of the music on this bill is on a similar wavelength to ours in some respects. We’re probably the elder statesman of the lineup. We’ve been doing things a little bit longer, but it’s nice that some of those acts are probably ones that have been have taken a bit of influence from our music and had amazing careers in their own right. So it’s cool. A nice little family to be out on the road with. 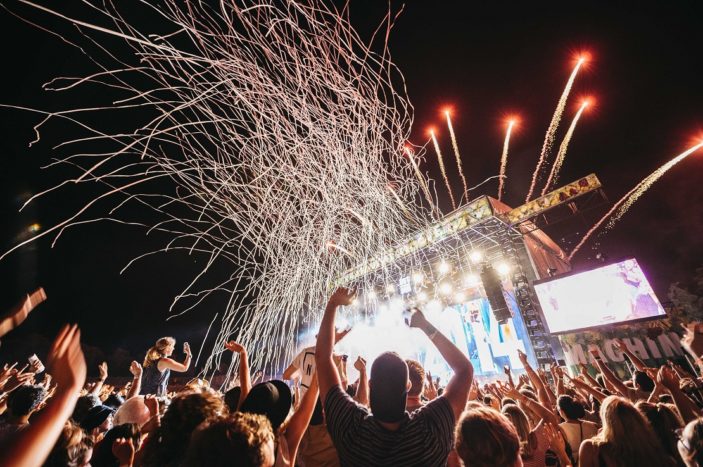 Now just on the rarity of touring Australia, I know you’ve got an upcoming show in your hometown Melbourne in December back at Northcote Theatre where you started out really, which must be super cool to have in the diary after all these years?

Absolutely. I was actually trying to figure it out the other day, but because we play in Australia fairly infrequently with the limitations of people living in different places. But I realized that this show in Melbourne is actually gonna be the first time we’ve played a headline show there for five years, which seems kind of crazy.

We’ve done a few little festival things over the last few years amongst our international touring schedule. But we’ve probably just missed out on playing some headlines, so we’re super excited about playing our “hometown” for our band.

Obviously, a lot of people and our mates want to jump on the guest list. So we’ll see how they go with that. I think it’s almost sold out. So I’ll have to pick some of my best mates, I suppose. Just the absolute best of the best. It’s actually really close to where I live as well, so probably I’ll walk home afterwards. It’ll be a nice sort of homecoming show.

You’ve alluded to some of the tours you’ve got coming up, but is there any album in the works? And is that even possible, given the challenges of where you guys are live?

Yeah well, I hope so. Certainly, we’re working towards new music. We’ve been through a bit of a phase with the last record coming out and had a bit of an anniversary of a whole bunch of our older material and putting out a box set of our collected works and also the January tape, which is a bit of an obscure cassette-only release that we put five or six years ago, and that’s finally getting a vinyl release. So we’ve been doing a few reissues just because people have been hassling us about it. But we’re in the midst of writing new stuff. I’m actually in the studio literally, right now, working on our new stuff. And I guess hoping to have some stuff out next year. We’ll see how we go. Obviously, having the guys out in Australia will help move things along a little bit. But certainly very excited to hopefully get a new record or at least some new music out next year.

Awesome Dan, great to hear that. Thanks heaps for lending us your time and have a great time on tour!

You can get your tickets to Wine Machine HERE

Head to the official website HERE for more information