Swedish rock ‘n’ rollers The Hives have always been known for their charismatic and energetic live shows and this week they’ll play a Sydney show as part of their World’s First World Wide Web World Tour 2021.

But the shows won’t be your standard online stream, with The Hives differentiating themselves with a unique level of interaction.

Crowds will be able to send in audio messages and they will be played for The Hives in the room in real-time, as if you were in the crowd shouting! The Hives will be accepting telephone calls and the crowd will vote on a selection of songs to include in the set. 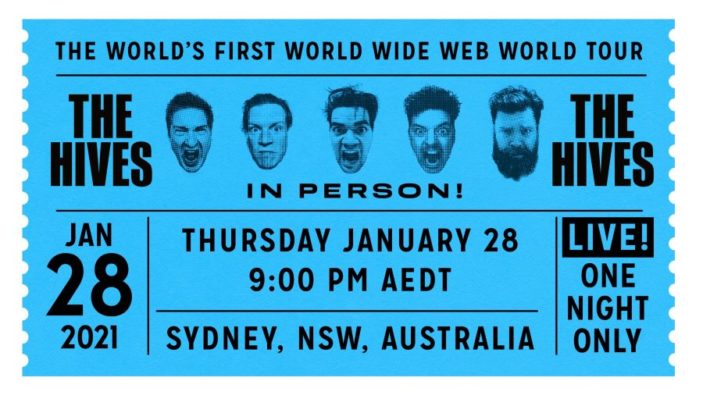 Thursday’s ticketed show in Sydney is one of six they’ll be playing worldwide, with the performance tailored and performed for each market.

Well known for their big singles like “Hate To Say I Told You So”, “Tick Tick Boom” and “Walk Idiot Walk’ during the garage rock revival in the early 2000s, The Hives are back and The AU Review spoke to guitarist Nicholaus Arson.

Gday from Australia, we love the concept of this streaming event designed for different markets and to be interactive. Where did the idea come from?

The idea came from a live show loving band that shall remain nameless (The Hives) not being able to play live shows. We were aching for it.

I’m trying to get my head around this, you’ll actually be answering phone calls from fans during the show, between songs!? Audio messages & song votes?

Ha ha yes! All of the above. That will be new even to us, but we have hopes that it will at least resemble people in the crowd screaming things to or at us. We thrive on that shit.

The pandemic is encouraging some musicians to get creative. Does that hint at any new work coming out soon for The Hives?

When it will come out is up to the pandemic gods, but yeah we have two full-length albums ready to rehearse and record, and we are working on a third one. Lack of material was never our problem during this hiatus if you will. The problem was boiling it down to fit on one record. Now that we have decided to make more than one it’s easier. We will release a record when we are able to tour it. That’s how we normally do stuff.

So given it’s been 8 years since your last studio album and we’ve not heard any new singles for a bit, why have you decided to do this tour now?

Well, a band makes records and then they tour. That is how we always looked at it at least and for us a big chunk of what we do has always been the touring. We miss it too much.

We have those records ready to rehearse and record, but we can’t go anywhere to record them, and at times haven’t even been able to travel to see each other for rehearsals. We had to shift focus and quench our thirst for live shows instead.

Your live shows are quite famous for their energy and charisma. Are you feeling the rock ‘n’ roll deficit?

Oh definitely! That’s why we’re doing this. And the deficit is all across the board not just rock ‘n’ roll. Although the rock ‘n’ roll deficit is the hardest for us to accept.

How will you go about re-creating that energy digitally?

That will most likely not be a problem. The urge to play that we have accumulated over these past days, weeks, months and soon even years is definitely enough to tear both the Internet and all six cities some new assholes.

The band is, with all due respect, a bit older from the Barely Legal, Veni Vidi Vicious and Tyrannosaurus Hives days, so has the live show changed in recent times?

I usually say that we became older, wiser, faster, stronger and better in every aspect. The rock gods award those who believe!

Haha, can we expect those good old black & white outfits?

Without giving too much away, yes!

All shows will be played live into markets, so for the Sydney show you’ll be playing at 11am Sweden time. How do you feel about that early start?

Yeah that’s the only one that will be a little bit awkward. It’s right after breakfast for a rock band or possibly even before. All the other times are pretty normal for a rock band ranging from 8 o’clock in the evening to 1 o’clock in the morning I think. Australia is the only one that stands out. We will charge up for that with a big Aussie Brekkie – avocado toast, vegemite, sausages (both the veggie kind and meat), mince pies, Moreton Bay Bugs, crocodile juice, cereal and a shit ton of mango I guess. 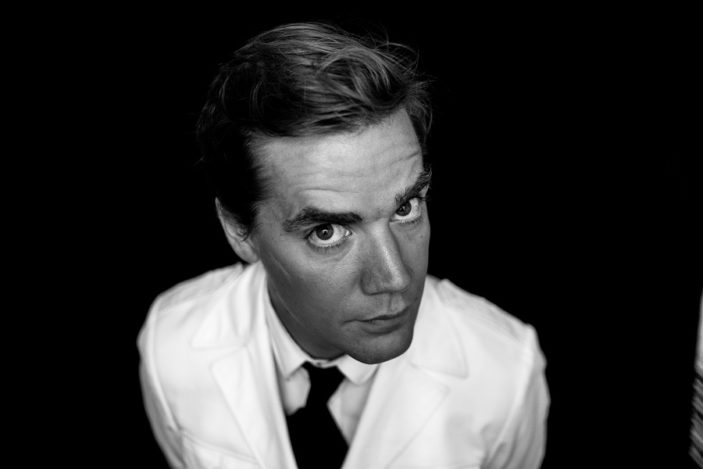 Where exactly will you play the shows?

It’s an underground bunker specifically designed for pandemic live shows over the internet. One of those things you never knew existed and then you find yourself in the situation of trying to find one.

You’ve got some big markets on the tour; Berlin, London, New York, Sao Paulo and Stockholm, so why’d you include Sydney/Australia? Have you always had good support in Australia?

We wanted to do more shows to begin with, but we couldn’t really afford it, so we had to boil it down to an amount that we could still call a tour and afford, which led to six shows.

We wanted it to cover the whole globe on a map getting a sweet array of different timezones. We knew we wanted a North America show, a South America show, a continental Europe show, a UK show, a homecoming Sweden show, and an Australia show. We’ve always had great shows in Australia. Can’t even remember an Aussie one that would amount to being anything less than grand lux gday grade A!

Awesome Nicholas, thanks so much and good luck! We can’t wait to watch it on Thursday!

Shows are not geo-blocked, so you can purchase tickets to whichever stop on The World’s First World Wide Web World Tour you wish!