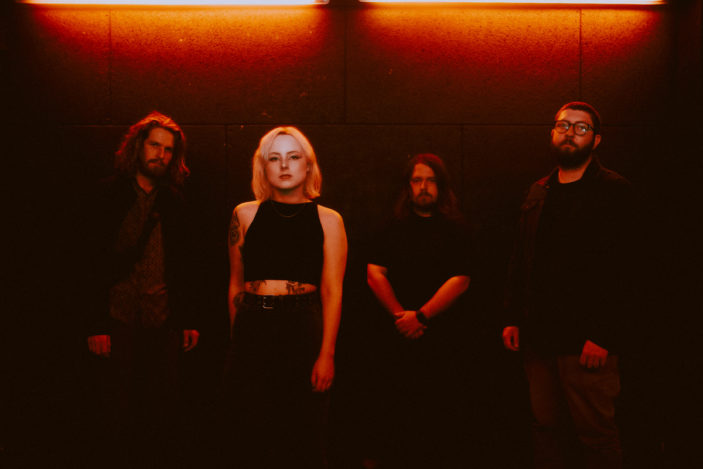 The emo punk scene in Australia is flourishing right now and there are few bands who do it as good as Newcastle quartet Eat Your Heart Out. After a turbulent past few years, the local legends are set to release their second album, Can’t Stay Forever, on 9 September via Fearless Records.

We caught up with frontwoman Caitlin Henry to discuss the new music and how they have evolved since their last release.

“It is exciting, that’s probably the best way to describe it! It’s been over three years since our last record, it feels good. We were like, is anyone still gonna care? Has everyone forgotten about us? But it’s been really cool.”

EYHO have released three singles from Can’t Stay Forever – “Down”, “Sour” and most recently “Twenty Something” – which are all unique and showcase the band’s evolution. With not only time but also an upheaval of daily life in between albums, it’s no surprise that the new music is more mature.

“COVID changed everything – all the plans that we’d had for new music, and even the way the record was created, all sort of changed. Initially, after our last record came out in 2019, we planned to put out new music in 2020. Not a whole album but something, then obviously 2020 became what it was. There was just an uncertainty of, like, when can we get back to it? So, in the end, we were into 2021 and it was time to make a new record.”

Forced to write much of the record individually and collaborate over Zoom calls, the band took things into their own hands this time around. It not only gave them creative control, but also the pent-up energy to make something truly honest and passionate.

“The actual recording we did all together as soon as lockdown ended. We kind of just had the plans on hold, the studio we were hiring and our producer Jack who came from Melbourne fortunately were both really flexible. We had them on the line and as soon as the government said restrictions were off, it was go time.

It begs the question: what did they do differently?

“Last time we were really underprepared when we made our record and we had to rely on our producer and Pat from Movements who co-wrote it with us. We didn’t come in with enough material, so it was a really steep learning curve for us. This was kind of the first time that I’ve had 100 percent creative control of the vocals. We wanted to really feel ownership of the record.”

“Down” is classic EYHO, with dirty riffs and a sad singalong chorus, while “Sour” is more empathetic and “Twenty Something” more introspective. It’s clear from these three offerings that we’re in for a bit of everything on the new record.

“I feel like every time I listen back to it, I pick a new favourite, but Down is one of my favourites. I was really glad that we all sort of agreed on that being the first single and it’s really fun to play live.”

The band have also announced that they will be supporting Minnesota punks Tiny Moving Parts on their Self-Titled Tour next February in Adelaide, Melbourne, Brisbane and Sydney.

“April and May this year we were lucky enough to go out to Europe and the UK for the first time supporting them. We got along so well and made really good friends with them, so when they said ‘we’re actually coming to Australia next year’, we were like, ‘hell yeah!’. They’re one of the nicest bands we’ve ever met, just so lovely and phenomenal live.”

Eat Your Heart Out have been a band for a decade now and they have their sights set on bigger and better things moving forward.

“I think the main thing for this year and next year is touring as much as we can. Getting to go to new places and go back to places we’ve been. Also, not leaving it three years again between new music! We just want to grow our presence and playing shows is the best way to do that, I think.”