Interview: Bruno Major (UK) on To Let A Good Thing Die, unleashing the brain and songs to cry to 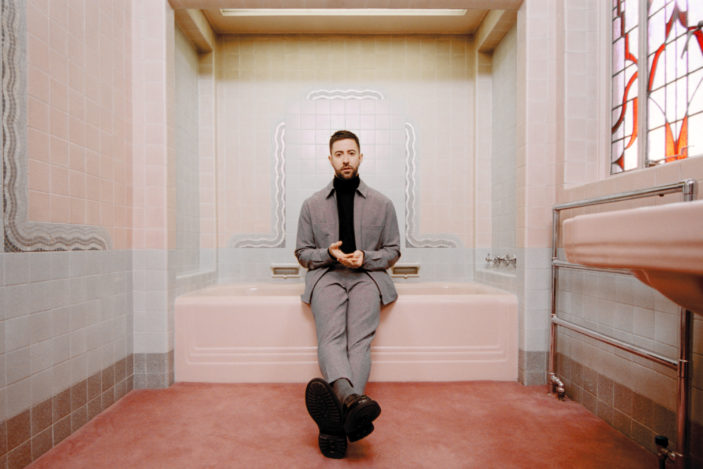 Bruno Major made waves with his debut album A Song For Every Moon, which he drip-fed to his followers with a song each month. A creative exercise which held him accountable to release music consistently through 2017.

His soft-spoken heart-wrenching lyrics earned him some big name fans, including FINNEAS, who reached out to collaborate on a track for Major’s second studio album To Let A Good Thing Die. Out now and available for your lonely-hearted consumption, the album holds poignancy in the same vein as his debut.

We caught up with Major ahead of the album’s release to chat about the album’s creation and in anticipation (fingers crossed) for his appearance at the rescheduled Splendour In The Grass.

Where are you right now, Bruno?

I’m currently locked down at my parents’ house.

No, it’s in North Hampton which is about an hour North of London. I’ve been here for a good month now.

Are you loving living back at home with the parents?

Yeah. I’ve actually had a really lovely time. I don’t get to spend as much time as I would like with my family. So yeah, it’s been really lovely to reconnect, recalibrate, recharge, all of those things. I feel bad saying it. Because, obviously it’s been such a horrible thing that the world has gone through. It happened and we are all learning to reconnect with the things that are really important.

I think there’s definitely been a lot of re-evaluation of what people hold close to their hearts and who people are keeping in contact with, so that’s really nice to hear.

Congrats on your second studio album To Let a Good Thing Die. This album, I would say has a lot more introspective themes than your debut. You asked a lot of “whys”, like “why do people love me?” Or, “why are these things happening to me?” I think you’re looking a lot more of the reasons in this album.

Yeah. I’d agree with that statement.

Tell me about “Tapestry”, because I think that song in particular encapsulates that sentiment.

So “Tapestry” was a really important song for me. It was one of the first songs I wrote on the album. It was during a period where I’d been dropped by a record label and I’d come back from Los Angeles, where I was signed, to London. I’d really lost my self esteem and didn’t have any money left. And I was working as a songwriter/producer and it wasn’t going that well.

A lot of uninspiring sessions and in kind of desperation I ended up getting a job working as a theatre director or musical director for a theatre company, writing music for Shakespeare plays. I would go in every day and go to rehearsals and what I had to do was write and put the most beautiful words that have ever been written to music. It was during this period that I wrote “Tapestry”.

I think being surrounded by Shakespeare really unlocked me in some way. It was the first song I’d written since my record deal experience that I was really proud of. And, it was also the first session that I met Phairo Finlay, the guy that I co-produced both of my albums with. So all in all, it was an extremely important song and I’m very indebted to it.

So timeline-wise, you’d written the song prior to your previous album?

Yeah. Yeah, I did. I started writing songs when I was 22. I was signed at 24 and then dropped very quickly. Then I wasn’t able to release music for two years after that. So, before I released my first album, I wrote close to five hundred songs. I have a huge catalog of music that’s unreleased and obviously I can only put ten or twelve songs on each album. So, there are a lot of songs that I really love that I still have, that I’ve written during that period. They might end up on album three or album four.

And pepper them throughout your live shows. It’s just little, little tidbits for all your fans.

That’s how “Nothing” ended up on this album!

That song was written just after I released my first album and I went to LA to pretend to show the album to people. But, really just to party and celebrate. And, I ended up meeting up with [Ralee] Nicole, who’s this amazing singer-songwriter from San Diego. We wrote this song and started playing it on tour and everyone loved it so much, it became this fan favourite and even though it wasn’t finished, people were doing YouTube covers of it and stuff. So, I finished writing it with her when she was in London, recorded it and put on the album.

Speaking of bodies of unreleased work. You’ve got “The Most Beautiful Thing” with FINNEAS, but I imagine that’s not the only song you guys have written together.

I think “The Most Beautiful Thing” was the second song we wrote, actually.

Would you release the other ones?

Yeah, it’s not that they’re not good. It’s more about context for an album, for me. “Old Fashioned” was another song that I wrote, it was one of the first songs I ever wrote full stop. But when it came to making my first album, A Song For Every Moon, I already had “Easily” and I had “Fair-Weathered Friend” and they were both that kind of feel. And so I didn’t feel, “Old Fashioned” had a place in the context of the album. And when it came to making this one, I was like, ‘Oh, perfect. That’s going to fit in here.’ With “The Most Beautiful Thing”, I felt like that was a great song to go. I think it’s the second track on the album? I believe it is. It felt like a good kind of, ‘Let’s go, we’re going into the album now!’ So it just feels it serves the purpose.

I want to ask about “She Chose Me”, because I noticed that this is one of the first songs you’ve used pronouns in. A lot of your songs you’ve actively decided to kind of omit them in a way of keeping them relatable to a wide audience. Was this a conscious decision for this song?

Well, I still have that rule. The reason that there were pronouns in this song is cause I didn’t write the song. That is a Randy Newman song. I don’t actually think I’ve ever used a pronoun in one of my songs. This has been a very conscious decision. I was actually quite inspired by Sam Smith for that reason.

He’s a very well known gay man and all of his songs can be listened to by anybody of any sexuality and gender and still apply. I always thought that was so cool. And also really, probably, important actually. So yeah, I found that I decided to do that with my songs.

They say music is a universal language, but it definitely does have segregation when we use pronouns.

Would you ever consider releasing like a super ecstatic album? Have you ever fiddled around and you’re like, “You know what, f**k it. Today, I’m just going to make a real trash pop song and see what happens”. Have you got those in the bank anywhere?

I’m not really an ecstatic kind of guy. I don’t really write for any particular purpose or anything like that. I don’t ever go into a songwriting process thinking ‘I’m going to do this’. Emotionally speaking, I just let whatever comes out, come out.

I appreciate the cathartic nature of your music. I’m also curious as you’ve discussed in the past brain exploration. Harry Styles touched on it recently in an interview with Zane Lowe, about using hallucinogens to unlock and unleash the creative process. Have you ever dabbled in using substances in your creative process?

Finally, I want to ask what’s a song that makes you cry?

A song that makes me cry?

Yeah, when you’re having those days where you’re like, “I just need to let it out”, and you go listen to a sad playlist. Is there one song for you that you wish you had written it?

So many, so many. Man, I remember having a real emo moment with a “Girl from the North Country” by Bob Dylan.

What was this emo moment?

It’s just him reminiscing about a past love talking to her current beau and saying, ‘look after her’ and, ‘I still love her’. I was in London and I remember being on a bus in the rain, looking out the rainy window. Like Joey and friends, pathetic fallacy. And yeah so I’ll go for that one, Bob Dylan, “Girl from the North Country”.

Excellent pick. Bruno, thank you so much and again, congrats on the album. It’s wonderful and I can’t wait to hear it live.

Thank you, me too. And I’ll see you there.

Bruno Major’s To Let A Good Thing Die is out now via AWAL. You can order a copy of the album or stream it HERE.