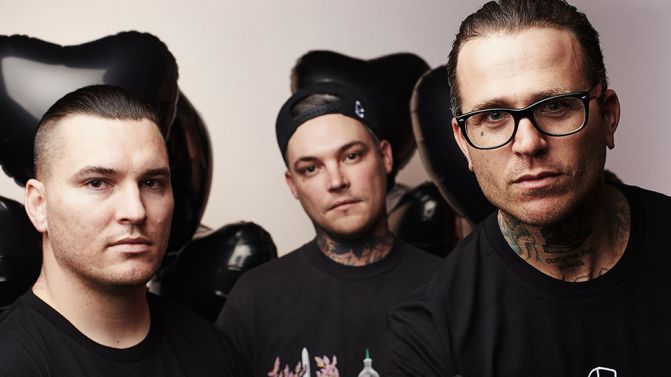 Back in August, The Amity Affliction released their new album Misery, which saw them claim their fourth #1 album on the ARIA charts. Bassist/Vocalist Ahren Stringer sat down with Josh Champion from the AU to look back on the release.

You guys have a rep for hitting the tough issues front on, but this is particularly dark matter. What drove you here for this record?

I mean I don’t write the lyrics, that’s all Joel [Birch]. So I can’t really talk about that. But musically we just wanted to try some new stuff.

So Joel writes all the lyrics, does he come to you with that and sort of go here’s where my head is at, or does the music get written separately and then it becomes a process of fitting it all together?

With this album, Dan [Brown] wrote all the music. I get Joel’s lyrics and then I compose melodies for the lyrics. So I get the fun job of being the composer, where I get to choose the songs we actually use. Dan wrote about twenty songs, so I just chose the ones that I thought were good enough. So yeah I do sorta just choose which songs lyrically go with which tracks musically.

The cinematic videos you’ve released so far are just gripping. How did the concept for those come about?

We’ve wanted to do something like this for a long time. I mean for our last album we did a two-part storyline, but this time around, now that we finally had the budget, we thought beauty. We’re all big fans of 80’s crime stories, like Chopper etc. so we all decided to put together an 80’s Australian Crime Story. Joel wrote it in I think one night, and then everything else sort of snowballed from there. But it was a whole lotta fun.

Misery appears to be musically quite diverse album with little genre crossing cameos. For example, there’s a particularly funky little synth lick in “Feels Like I’m Dying”. You spoke before about the creation process. Are those the sorts of things that you slot in when you’re composing or is it a more organic thing in the studio?

Well that song in particular was a real Frankenstein in the studio. It was just one of those things where magic happened. Matt Squire, our producer, was playing with sounds constantly and found that little lick you referred to and we all thought it was hilarious, but I thought, “fuck – maybe we should put that in, in place of a word.” Which we did, and we all still thought it was hilarious, but we also couldn’t deny that it sounded amazing so we went with it.

But yeah, Matt doing that a lot brought those songs back to life for us. We’d been listening to them for two years and his input really freshened them up for us. I mean Matt was in a Hardcore band in the States, but he has also done a lot of pop production like Katy Perry and Ariana Grande.

That’s really interesting that you say that, because I certainly picked up a new diversity and bravery to cross genres. Knowing that about your producer makes a lot of sense.

Well that’s it. And that’s what we set out to do. We wanted to make sure every song sounded different, so that it had it’s own unique theme. And we learned all this the hard way. Before we’ve always wanted to sort of make every song good, but to make album be, like a genuine rollercoaster from start to finish, you certainly go through lots of emotions.

This might sound stupid when I say it, but it certainly felt more like a concept album. In my head there was a bit of a Dreamtheater-meets-Green Day type vibe happening. And the synth/piano sound behind the guitars isn’t necessarily new for you guys but it was like it had gone up a level.

Well we did strip it back guitar and vocals wise – we didn’t add all the layers of harmonies that we have in the past – you know, that end up sounding like a barber shop quartet. We wanted to make it very catchy. And we’ve been doing the electronics since day dot, but like you said, we definitely boosted it up a notch on this one.

It’s fifteen years since this whole thing got started. And you’ve been there since the beginning. Did you have a trajectory in mind back in 2003? And if so, have you stayed on it?

For me, I always just wanted to be as big as the bands we were listening to at the time. That was the end game. And one of my first goals was to play the Arena in Brisbane. Bands like Atreyu, Poison The Well and AFI. We just wanted to be peers with them. Support them and be as big as them. And we’ve definitely accomplished that goal and now its like how big can we take this? It’s strange to say that out loud. That I’ve actually accomplished my dreams! But honestly everything from here on out is a bonus.

Misery is available now through Roadrunner Records. The band are currently on tour in Europe, for more information and dates click HERE. They will also be appearing at Download Festival in March 2019, tickets are available now.