Highlights from Day Two of All That Matters in Singapore: Sports, Music, Gaming, Sync and Twitter Converge

Day two of All That Matters kicked off in Singapore yesterday with Sports Matters, and a conversation with Chatri Sityodtong, founder and CEO of the ONE Championship, as the morning developed with enlivened chats about the new era of Football in Asia, future-proofing large scale sponsorship of events like the PGA Tour and the F1, which is happening this weekend in Singapore, and a focus on the sports industry in India; which of course saw Cricket take centre stage.

While a group of delegates delved into the China Music Market during the Tencent Music Entertainment Connects event, and the main stage continued on with its Sports Matters program, the Twitter Pavillion saw Jennie Sager of Twitter talk about the future of music, brand and media partnerships – something that would be shown in full light when Jennie hosted the #TwitterFronts event at the end of the day, announcing a series of new partnerships with premium video content makers. The different streams then converged in the ATM “Live Event Forum”, where the MD of Ticketmaster and guests from Peatix, Ticketflap and more spoke about ticketing across Australia and Asia.

As we moved into Digital Matters, we talked about how mobile apps, looking at how they account for over 80% of our “mobile time”. And those apps are entertainment, social media, instant messaging and games, collectively making up two thirds of “app minutes”. It was also interesting to find out that overall video growth has been led by, but not exclusive to, mobile devices. The growth of online video on mobile has grown three times as quickly as desktop over the past 12 months.

The Music Matters program progressed with the “Label of the future”, as Ghazi Shami, Founder and CEO of EMPIRE, was interviewed by Graham Perkins. He talked about how he saw the artist fitting in to the industry; “I feel like the artist is the epicentre, and tied into that is all the different energy streams.  These streams might be social media or merch or blog posts, YouTube… all creating energy to create an audience. What you’re essentially trying to do is to create as many streams as possible, and tie them into one epicentre. And then hopefully it’ll create success.”

He looked broader at the business of the industry too, saying, “the music business is like any business. It’s all about your relationships and synergy.” And it’s also about broadening your business. For him, “our company is rooted not just in music but technology as well. Things are always changing. We were once signing artists who were trending through music.ly. Now that’s pretty much obsolete.” So he emphasised the importance on staying on top of all technology trends in the industry.

At Sync Matters, ads and music were brought together in the panel “Sound and Vision: how music brings media and messaging to life”, with guests from Big Sync Music, Warner, Audio Network and more. They talked about the surprise in finding the right song for a campaign, “You never know where you’re going to find something for a project, to find that perfect piece of music to enhance your client’s campaign.” And looked at how they also have a unique opportunity to break local artists in their scene.

Josh Rabinowitz, EVP/Director of Music, Grey Townhouse WPP, also took a moment to praise the oft-used music libraries, saying, ‪”as things have progressed over time, I’ve appreciated music libraries more and more – when we’re low on budget, these libraries are godsend.” It seems that music libraries, a mainstay of the sync world, are certainly here to stay. 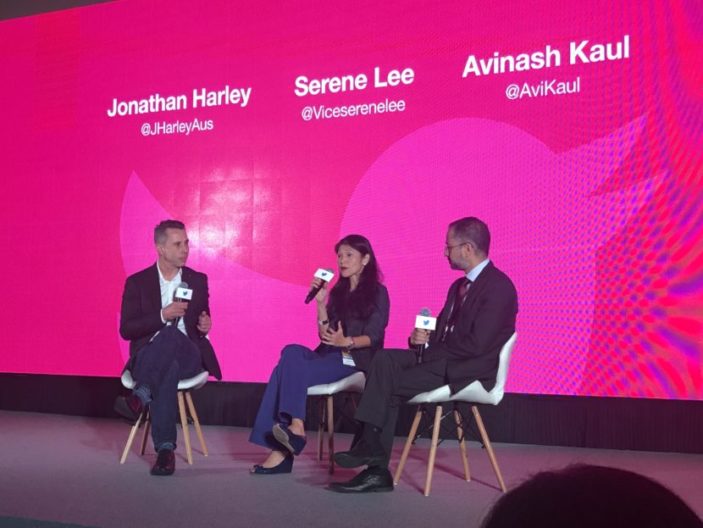 There was an afternoon of announcements of new twitter video partnerships in #TwitterFronts. In addition to new Bollywood partners, Sony Music were announced as the first Music label to partner with Twitter in the Australia / Asia region, and other providers like Vice, Buzzfeed, Australia’s Channel 7, 9 News and more took centre stage across a series of conversations about the new partnerships.

While Twitter made their announcements, the Gaming Matters program came to an end with a keynote where Ralf Reichert, the CEO of ESL and Turtle Entertainment had a chat with Nicholas Khoo, the Co-Founder and Chairman of SCOGA. Ralf spoke about how he “still gets goosebumps” when watching the first collaborative advert by ESL and Mercedes, their first big sponsor. And naturally, he only wants to go uphill from there. When talking of the now 3-year running IEM event in Sydney, he spoke of his dream for IEM Sydney: “We want to make it like Wimbledon, in the way that every first week of May, you’ll know that IEM Sydney will happen.”

When talking about the future of gaming, which closed out the day, Co-Founder of Twitch, Kevin Lin looked at the rapid rise in popularity of battle royale games; he thinks that games will become more collaborative. Even their own project, Twitch plays Pokemon, had audience interaction to dictate where the game went and he says that “the future will see closer ties between game developers and players with a lot more collaborations”.

Michael Cheung of Makers Fund ended the conversation with a slight jab at the current gaming ecosystem, which he felt is very separated. “I think we’ll increasingly move towards a more platform agnostic experience, but some of the bigger companies are doing their best to not allow that to happen…I’m not going to name any names.” But anyone who knows the gaming industry, knows exactly who he’s talking about. But we’re not going to name names either.

Stay tuned to the AU review for more coverage from All That Matters in Singapore.

To get to Singapore for the conference from Australia, we travelled courtesy of Scoot, and stayed at the Hotel Indigo Katong.

Tags: All That Matters, Singapore