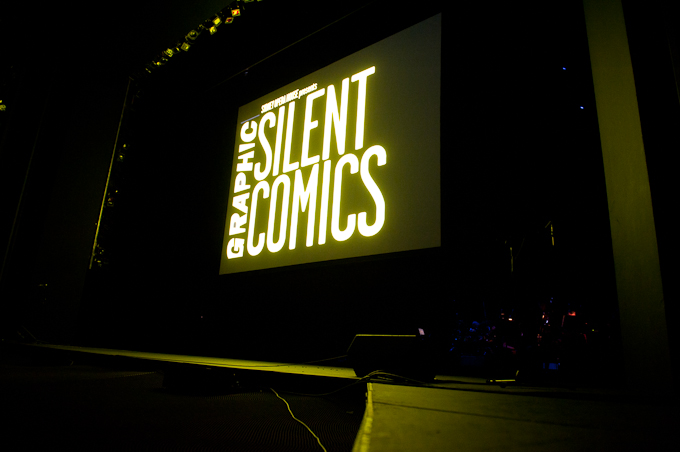 Today I seemed to spend just about my entire day wandering the halls of the Sydney Opera House, immersed in a world of graphics, music and art. From the free talks in the Western Foyers to the Independent Games Festival in the same location, there was plenty to see and do even if you didn’t have a ticket to one of the dozen events happening around the various Opera House theatres. I had the pleasure of experiencing Gotye’s brilliant standalone performance last night, so today was all about animation, comics and sound in the Opera Theatre.

I arrived bright and early (11am on a Sunday gets a definition as such) for the screening of the 2006 cult anime film Tekkon Kinkreet, accompanied by a live soundtrack by Plaid (Warp) (a world premiere performance), who penned the film’s original music, alongside Sydney string quartet (and self promoted indie rock band) FourPlay and “Australia’s premiere percussion group” Synergy.

I guess I should start by talking about the film. It was one I hadn’t had the pleasure of experiencing before. I can’t say I’m normally a big fan of Anime (although I enjoy them aesthetically), but this one completely won me over. It’s the story of two young friends – black and white – who work together to defeat the Yakusa. But when white leaves black, his balance is thrown off, and he essentially has to fight off the evil inside him to get white back. It’s a classic good versus evil story, with plenty of Japanese symbology running through. The film had big energy, big colour and its worth seeing for the watercolour sequences alone.

Throw in a massively impressive soundtrack by Plaid (accompanied live as above), and the whole experience was nothing short of extraordinary. The music was subtle for the most part, and as it was performed in the orchestra pit, you couldn’t help but often forget it was being performed live. When the action struck in, however, you often felt as though you were blown back into your seat by the power of it all. A brilliant reminder of what was going on in front of you. As a lover of film and music, seeing them brought together in this way was a truly amazing experience I wish took place more often.

This concept was taken in a slightly different direction later that day for Silent Comics, a collection of wordless comics (not the most common things in the world as I’m sure you’d imagine), interpreted by 6 groups of musicians. Each group performed for roughly 10 minutes, and with that we had before us a terribly entertaining, occasionally bewildering experience (have you ever tried making actual sense of some of the content Robert Crumb comes up with!?).

The night opened with a prelude piece by Ben Walsh and Matt Ottignon of The Crusty Suitcase Band; a sound effect driven re-interpretation of a comic about birds and music. A great little piece to get the ball rolling for the night, and give us an idea of the direction the night would be headed… just without the performance element they managed to incorporate so brilliantly.

The rest of the night was divided into six parts, starting off with the Captain Matchox Whoopee Band Re-Ignited performing some ‘old-timey’ music (with the trumpet often used for comical effect, and plenty of sound effects here and there) to “One Dollar” by Peter Kuper (Spy vs Spy), “Ultra Super Modernistic Comics” and “A Short History of America” by Robert Crumb. FourPlay then brought us some orchestra goodness for Robert Langridge’s “Nowhere Special”.

We went down the electronic route, with Plaid for the bizarre “Buster in Mouth City” by Hunt Emerson, followed by Seekae with Nathan Jurevicus’ well known “Scarygirl”. Gotye gave us the most original music of the night for Kim Woodring’s “Frank’s Faux Pa” – a super rad high energy experience that felt like it was straight out of the sort of 90s cartoons that were based on comics themselves. In my books that’s a pretty good place to gain some inspiration.

Hitting onto the stage with some Star Wars music, Darth Vegas impressed with another Langridge comic, “Fred’s Dream”, and their entertaining interpretation, which again added plenty of trumpets for humourous effect (in that way they often referenced the nature of silent film – where the sound effects would be played live), closed the show.

With the exception of FourPlay and Plaid, who returned to the orchestra pit where they performed for Tekkon earlier in the day, the performers took their place behind the screen, remaining largely unseen, but making their presence known. It was an odd premise on paper, but definitely worked. Seeing music and graphics interlaced in any form is always welcomed in my books, and I have to raise my glass in respect to the organisers for putting together such an adventurous GRAPHIC program for 2011. I look forward to seeing it return bigger and better in 2012!