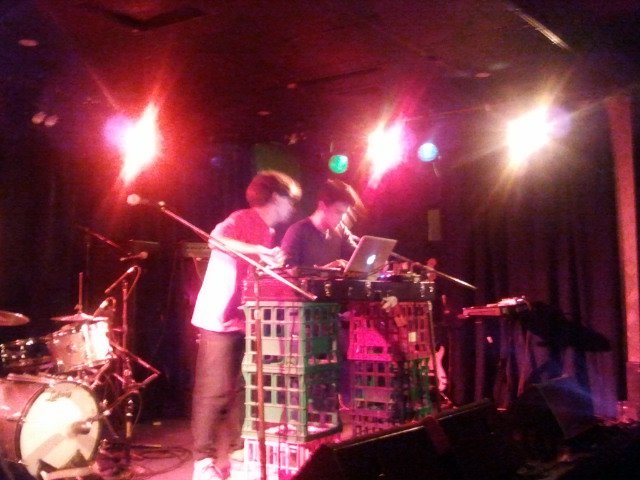 A few brave souls battled Melbourne’s icy weather to make it down to the Northcote early enough to catch local act Absolute Boys doing their thing. I was rather disappointed that I only arrived in time to catch their last two songs, as their sound was very good and left me craving more.

Having been a big fan of Collarbones Iconography LP and knowing that their music involves no live instrumentation, I was concerned that I may be subjected to watching the boys awkwardly shuffle behind their laptops all night. Fortunately my fears were baseless as Marcus Whale and Travis Cook are lively entertainers and while their set did involve a spattering of awkward dancing, their comedy routine between songs kept the atmosphere laid back and fun.

Whale’s vocals are very impressive and even though he admitted to having a cold and stopped a few times onstage to have a ‘diva’ moment, there was no denying the awesome power of his nineties boy band style delivery. They played a good selection of tracks including “Kill Off The Vowels”, “Transylvania” and the Pitchfork congratulated “Beaman Park” that came complete with an impromptu inclusion of J-Lo’s classic “Jenny From The Block”.

The best thing about Collarbones’ performance was the fact that they play incredibly good music without taking themselves seriously, and the boys kept a good banter going with each other and the crowd. Whale danced all over the stage and the band room, finishing off their final song for the evening “Don Juan” down amongst the crowd in a dance floor extravaganza that left everyone buzzing on a grand high.

This made a stark contrast from Ghouls set. The Sydney based four piece have been receiving rave reviews for the latest record Dunks, and while their studio work is majestic, for me this didn’t translate to their live show. They seemed to take themselves a little too seriously and while their arrangements were all perfectly executed, the delivery of the music itself was lacking in energy and the intensity I’ve come to expect from bands of the genre. The band members barely cracked a smile onstage and only uttered a few awkward sentences between songs, seemingly intent on crafting their sound, which was nowhere near as captivating as I had hoped it would be in a live setting. Perhaps Ghoul were having an off night, or perhaps I’ve gotten too fussy in my old age, whatever the cause they played a solid set that was good but by no means great.