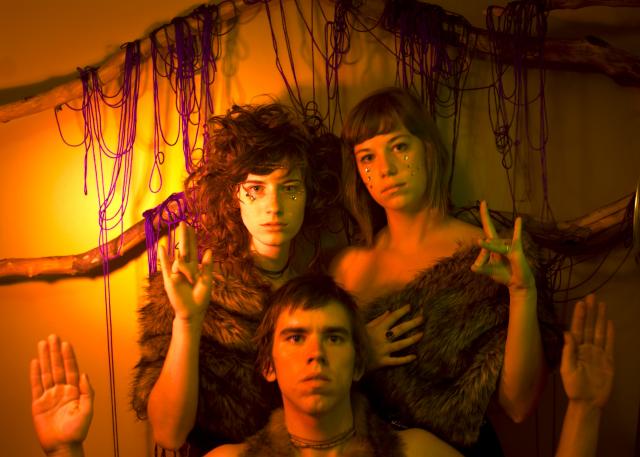 Local duo Gulls kicked off proceedings with a subtle and mesmerising performance. Gulls are made up of Amber Fresh (Rabbit Island) on vocals/guitar and Matt Aitken (Gilbert Fawn). The pair draw on eastern themes, creating a sound that was both intricate and engaging. There was little interaction with the audience, bar the odd thank you, but this seemed to work more in their favour, giving their set an added feel of mystery.

Fellow locals Erasers kept up the musical theme, albeit adding more amplification. The three-piece put on a set that was atmospheric and cinematic, with some nice distorted vocals from time to time throughout the set. There was again a certain reluctance to engage too heavily with the audience, instead preferring to play through. By this point the modest crowd which saw Gulls open, had grown slightly; and proved to be both attentive and appreciative in equal measure.

Following on from them were the third local act of the night, and final support act Usurpers of Modern Medicine. The band brought a distinctly rockier feel to the proceedings, with some impressive drumming. The band played largely instrumental pieces, which by the end of the set, began to run into each other a little. The crowd however seemed to enjoy it, with many making the journey from the outside bar area, moving closer to the stage. Alongside their impressive playing, the band made use of some cool visuals.

It was then time for Prince Rama to take to the stage. What followed was one of the most entertaining but weirdest sets I have ever seen. Taraka Larson started the set with a sequinned shroud over her head, moving ritualistically at the keys whilst chanting in harmony with her sister. From this auspicious and unusual opening, the band powered through a set that was characterised by melodic chanting, ritualistic drumming and trippy visuals.

Whilst their sound can become a bit repetitive, the band do plenty to mix it up, whether it be parting the crowd so they can dance amongst the attendees, or engaging in trust exercises with the audience midway through the set. A moment which saw Taraka falling backward into the audience, trusting those in the front row to catch her; all whilst her and her sister chant the word trust. It’s certainly one way to make sure the audience is engaging with the audience.

The night ended on a bit of a downer, with the sisters departing the stage (after dancing amongst the crowd) without so much as a word, bringing the show to a sudden end. Despite the sudden end, it was a great night, with a series of fantastic performances, culminating in a performance that’ll take a lot to be topped for sheer brilliant strangeness. If you ever get the chance to see Prince Rama play, don’t look back, it’ll be both enjoyable and an eye opener.