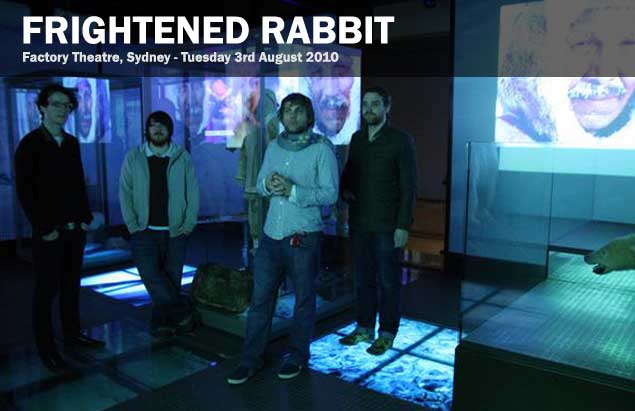 Here’s a scrawling of memories regarding a gig at the lovely Factory Theatre in Sydney that involved a certain formido Leporidae – Frightened Rabbit to quote the Latin.

I arrived a little late and missed the start of support act Sierra Fin. However, the group showed some nice enthusiasm, especially drummer Frosty who used his head with such vigour that I was certain he was head-butting an invisible cymbal or something. His out-stretched arm movements were also a highlight for me. The sound jumped around from some soft blues to a jazzy rock punch which was OK but if I’m honest a little unimaginative or maybe it was a bit too happy-go-lucky for me. I could feel a bit of The Whitlams coming through and I didn’t really appreciate that… possibly a bit harsh?

There was nothing wrong with the sound as such, it just lacked individuality for me. Although front man Russ did throw out some proper pianee playing. None of that ordinary piano type business, this was foot stomping arm pounding keyboard pianee I tell’s ya. Plus he made his way around Factory Theatre encouraging a semi-reluctant crowd to sing along with him which was nice. I sang. And although I wasn’t overly impressed with their set or their sound, I will be keeping an eye out for their debut The Cautionary Tale of the Beautiful Blackout. Recorded entirely with a symphony orchestra… it sounds a tad interesting.

Now I’m not the biggest fan of Frightened Rabbit. I like their albums, but I don’t love them. Having said that, I’ve been quite keen to see them live as I expected a very dynamic performance and perhaps something altogether different. The sideshow for Splendour provided the perfect opportunity and I was keen as a bean to check them out and I’m glad I did. My perception has reformed ever more toward the Scottish boys. I was kind of charmed by front man Scott Hutchison and his endearing Scottish wit. “Clap your hands if you don’t like clapping!”… Yeah, that one never works. But we clapped. Oh did we clap!

When the boys emerged for their set the crowd rapport was instantaneous. That may have resulted from the brilliant Scottish accent, Scott’s humour or the fact that he addressed us many times throughout the set… or more likely a combo of all the above. I love a bit of banter with the crowd. Banter should be a requirement of any live musical endeavour. According to Scott, there’s a popular Scottish hobby of getting slaughtered drunk and shouting at people that he’s quite fond of. He then felt the need to dedicate a song to all the people he’s ever been a “fucking dick to” … “c&#%s”.

Every time I looked around people were smiling and thoroughly enjoying themselves, like a dog with two dicks. I don’t even know what that means, but my point is they were happy, like they were receiving some slight secret and sensual insight from a rainbow no-one else could see… Haha. YEP, that’s what I’m going with. People seemed completely enthralled with what they were seeing and the feeling spread inescapably through all.

I was a little surprised by the variety of audience members. We shared the floor space with a huge range of ages, looks and trends. Each individual as enthused as the next, for me it was a great experience and a pleasant change from the collective followings you can get at some gigs. It also showed how permeating Frightened Rabbit are. They have an appeal that places them in a realm unconfined to a norm or inclined toward any one subculture or context. Listen to me, like I’m some form of adjudicator of music performances. It’s about to continue.

As much as I dislike the ‘encore’ aspect of gigs these days, (We get it, you’re coming back, but first we have to make noise – YAY) Frightened Rabbit managed to work it to their favour. The boys left the stage swiftly and Scott emerged soon after for an incredibly moving solo effort of “Poke” that had to crowd wide-eyed and entranced. It worked really well and didn’t have that facetious ambivalence that accompanies the tired old encore. The boys re-joined him and they played out two more songs, finishing with crowd favourite “Keep Yourself Warm”. It was a cold, cold evening, but warm I was… like I was wearing a soft rabbit fur coat. HA!