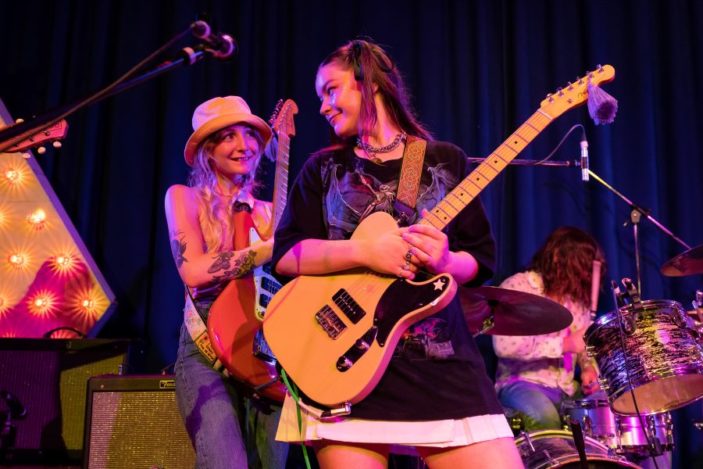 We are just a day away from weekend two of the Austin City Limits Music Festival and Zilker Park is ready to rock just as hard – if not harder – this time around.

Weekend one was a huge success and saw top headlining sets from P!nk, The Chicks, Flume, and Red Hot Chili Peppers. But lucky for us and tens of thousands more, the fun isn’t even close to being done.

The AU Review crew have touched down in Austin, Texas and we are ready to take on one of the best music festivals in the world. ACL began in 2002 and has grown in popularity and volume to be a two-week festival. There are several additions to the Weekend Two lineup that weren’t playing last weekend, from Boy George and the Culture Club to Death Cab for Cutie to Phoenix.

The festival is known for being so close to its beautiful downtown, having incredible BBQ all around, and being very family friendly. While we can’t wait for the headliners, Taylor, Waytao, and Nathan (myself) have circled five unmissable shows.

This is my candidate for best show of the weekend. Strings has exploded on the scene in the past few years and is primed to be headlining festivals for the next 40 years.

Strings is a guitar virtuoso. His hypnotic bluegrass-Americana vibe has attracted him a passionate following that rivals that of The Grateful Dead or Phish in their early inception. While seeing him for the first time in August, I was mesmerised by his voice, visuals, and guitar playing.

Strings will be playing the sub-headliner slot right before The Chicks on Friday. I have a feeling a lot of people are going to be blown away and talking about his set all weekend long.

Atlanta native Faye Webster will be anchoring the afternoon slots on Sunday with her smooth vocals. Webster will surely soothe the crowd with her blend of blues, country, and 70s pop.

Her albums keep her mellow voice always interesting and seemingly floating above the music and we are eager to see what she’s like in person. Her song “Better Distractions” made President Obama’s favourite songs of 2020 and will surely be a favourite of the crowd.

Webster’s latest release “Car Therapy Sessions” introduces a slower, orchestral sound. While we might not get to see an orchestra on stage this Sunday, it will be exciting to see her display her range of musical stylings.

The beauty of festivals is discovering an unknown band from the lineup release and then spending several months getting hyped for that new find. That act for me is without a doubt, L’Impératrice.

L’Impératrice is a pop-disco band from Paris. This will be part one of our two-hour French-band experience, as they are immediately followed by Phoenix. I expect L’Impératrice to bring all the grooves with their funky tunes and all the quirkiness with matching kitschy outfits.

The sextet will certainly have the crowd singing along in no time, whether or not they understand a word of French.

From the moment I first heard the British indie rock duet I immediately looked up when was the soonest they were coming to a town near me. Their ear-worm melodies, hilarious lyrics and rock girl vibes make them one of the coolest new bands in the world and I have no doubt that they will be unforgettable live.

It will be impossible for casual concert-goers who have never heard “Chaise Longue” not to feel the urge to bang their head and sing along. These Brit girls will rock through their mid-afternoon set and I feel like the next time they are back it will be much later and much more crowded.

When they announced Phoenix was only playing Weekend Two, my FOMO of not attending Weekend One immediately disappeared. The French pop-punk band is one of the greatest live acts of the last 20 years. From the singalongs to “Liztomania” and “1901”, to the visuals and power of their incredibly talented band, every Phoenix show is the most fun ride.

Friday night they will be playing right as the sun is setting opposite Nathaniel Rateliff and the Night Sweats. While the larger crowd might be on the other side of the park, the people that choose to check out Phoenix will have zero regrets with their choice.

ACL weekend two kicks off Friday afternoon on October 14 and lasts until Sunday. The Chicks and SZA headline Friday, Flume and P!nk on Saturday, and Kacey Musgraves and Red Hot Chili Peppers close out the fest on Sunday.

You can get your tickets HERE!