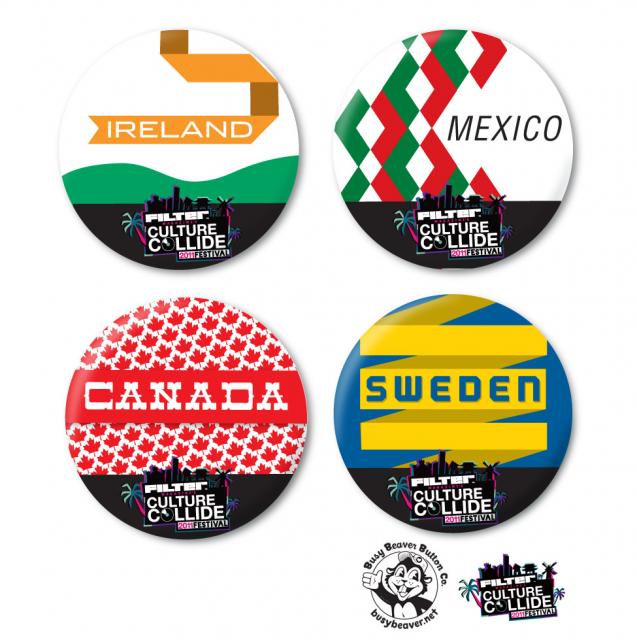 Sweden, Mexico, Canada, France, Brazil, Norway, these are just a handful of the 24 countries that will be represented during FILTER’s Culture Collide music festival coming up this October 6-9 in Los Angeles. To celebrate the colliding of the many cultures involved in the festival, FILTER is partnering with the Busy Beaver Button Co. to launch ‘PIN IT TO WIN IT’, the international button challenge, during the festival for attendees to collect buttons from all participating countries.

“We want to encourage festival goers to experience not only their favorite artists performing, but to take the opportunity to discover the amazing new talents that are coming from all over the world to perform, representing the international music scene,” stated Alan Miller, FILTER’s Co-Publisher and Co-Owner of FILTER’s Creative Agency

Created by Busy Beaver Button Co. and produced by FILTER, ‘PIN IT TO WIN IT’ launches on Oct. 6 at the Culture Collide festival. Attendees who have purchased the $20 Culture Collide wristband are eligible to participate in the button competition for prizes. For every country represented in the festival, Busy Beaver Button Co. and FILTER will create a limited edition button. Buttons can be secured exclusively at available festival venues, from bands, and at activations pertaining to each specific country.

HOW ‘PIN IT TO WIN IT’ WORKS

Festival goers can pick up official complimentary Culture Collide tote bags at the Twonkey lounge at Taix in Echo Park beginning Oct. 6. Throughout the festival, a button from every country represented can be collected at specific locations to be announced, in order to be eligible to win prizes. The collected buttons will be affixed to the world map on the tote, corresponding to the correct country. Totes can be presented to button contest staff members at the FILTER merchandise booth at the block party on Sunday, Oct. 9 for prizes. The first six people to show their full ‘PIN IT TO WIN IT’ international button collection will have their choice of prizes provided by Twonky, including Apple TV’s, Western Digital HDTV Live, Sonos S3 Speakers and an iPad 2.

A limited number of festival wristbands, providing access to all Culture Collide showcases, are available now for $20 and can be purchased at www.TicketWeb.com.