While most of Sydney’s partygoers were heading to Listen Out, I jumped on the train to Wollongong to check out the sold out Yours & Owls two day festival; an annual event which has become among the most anticipated and celebrated in the region.

Often being overseas at the same time, it was my first time heading to the festival, and with an easy trip to North Wollongong Station, it was clear I’d been missing out on a good thing for all these years. The sun was out – though accompanied by a cool breeze – and a stellar crowd was on site for the relatively intimate event, that still felt like something on the scale of Groovin’ The Moo. Though the trip was a much easier affair for someone living in Sydney.

The weekend was headlined by electronic artists Alison Wonderland and Peking Duk, but there was little dance music to be seen during the day on the main stages; acts like Alice Ivy and Maddy Jane (pictured in header) rocking out early on day one and impressing the crowd, and certainly getting them dancing all the same. It was a diverse festival this say the least, but rock music definitely proved the genre of choice, in particular representing the exploding local scene of Wollongong and surrounds.

Mallrat did bring the electronic vibes, however, showing herself off as the ever improving live performer and attracting a massive crowd early. Tracks included “The Valley”, and the set closed with “Uninvited” as she performed with her pals Denim and Tyne-James Organ. Meanwhile, in the Monster “Rad” tent, Jack R Reily and his five piece band got some singalongs happening with his beautiful tunes. They were followed by a local three piece doom metal band fronted by an 18 year old, Velvet Underground, who delivered a no-holds-barred 20 minute set that left ears ringing and impressed with songs from their debut Prīncipium, which came out last month. Meanwhile back on the main “Yung” stage, Middle Kids attracted the first truly massive audience of the day with tracks like “Edge of Town” enjoying a great singalong.

Though Sydney based, Mere Women were one of the many to wave the flag for Wollongong, with the lead saying the track “Home” is about the city (Wollongong) she grew up in. The four piece gained a decent crowd in the tent as the sun was setting. Touch Sensitive meanwhile was on the mainstage, with live drums and bass adding to make the often dreamy electronica all the more engaging. And the same would be said for Peking Duk later – even when an electronic act played the event, it was all with live instruments.

Speaking of dreamy, the smooth sounds of Tiny Little Houses was nothing short of a dream (and lines like “don’t vote for politicians, it only encourages them” were a stroke of genius), as it was to see Step-Panther back on the stage rocking the Rad Stage in true style: disceptively messy rock, delivered with style and a smile. There were some funky vibes with the energetic You Beauty, and a strong dose of Sax, with no less than six members flooding the stage.

Ocean Alley thrilled the main stage, attracting a mammoth audience – though their often chill vibes with covers like “Baby Come Back” and their own material suggested that maybe Touch Sensitive came on a bit early in the day. But that didn’t seem to bother anybody! Meanwhile, Tasmanian rockers Luca Brasi brought out some passionate fans singing tracks like “Got To Give”.

Canberra quartet Moaning Lisa thrilled their growing fanbase in the Rad tent, playing tracks like their latest single “Comfortable”, which they dedicated to “all the rad bitches” and I would go so far as to dedicate the track as the best of the whole day. Other highlights included tracks like “Someone” which got the crowd onto the floor and then onto their feet, seeing the entire tent converted into immediate fans – if they weren’t already.

The Jungle Giants were also getting their crowd moving and singing along with tracks like “You’ve Got Something”, “Blinded” and “Quiet Ferocity” as they set the stage ahead of Peking Duk’s epic festival closer. The set was a lot dancier than I expected too – at one point, things delved into a long instrumental jam, as the two leads snuck backstage for a beer, giving the crowd a chance, as Sam put it, to experiment with their dance moves. And they certainly did. 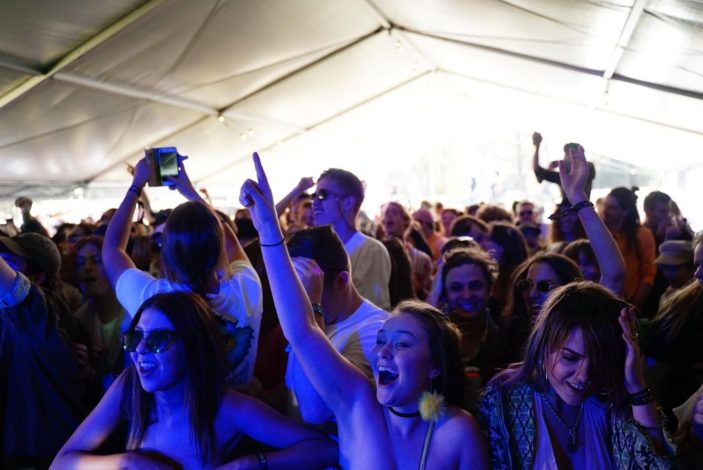 And the other stages weren’t done yet either, with Melbourne’s Press Club stunning in the tent, playing tracks that included “Crash” which opens up the band’s debut album. Unreleased track “He Knows Better” was golden and a strong sign of things to come, and they ended with their popular single “Suburbia” by way of a public vote between that and “Headwreck” as they ran out of time. And as heavy rock groups Polaris and Hellions closed pout one stage, Peking Duk closed out the other, fresh from a European tour.

You knew Peking Duk were going to bring one hell of a production in the headline slot. And they did not disappoint, with a guest-filled set full of pyro, all the hits and a few covers. Opening with their new single “Wasted” playing in full life trio mode (and with an extra dose of fire), the boys wasted no time in pumping out hit after hit. Chris Sebastian came out for “Say My Name”, then there was “Let You Down” with Michaela Baranov (who oft tours with Flight Facilities) and a massive dose of Co2 cannons. Al from Cloud Control came out for the track they made together in India, “Distant India”.

They offered some choreographed dance moves to a recording of “This Magic Moment”, as Michaela returned for “Fake Magic”. They did a version of The Strokes’ “Last Night” with a guest guitarist. “Fire” naturally had some beautifully correographed fireballs, and a cover of “Seven Nation Army” that, like the great Moaning Lisa before them, brought the crowd to the ground and back up again. A classic move if there ever was one to make sure the crowd was on your side. 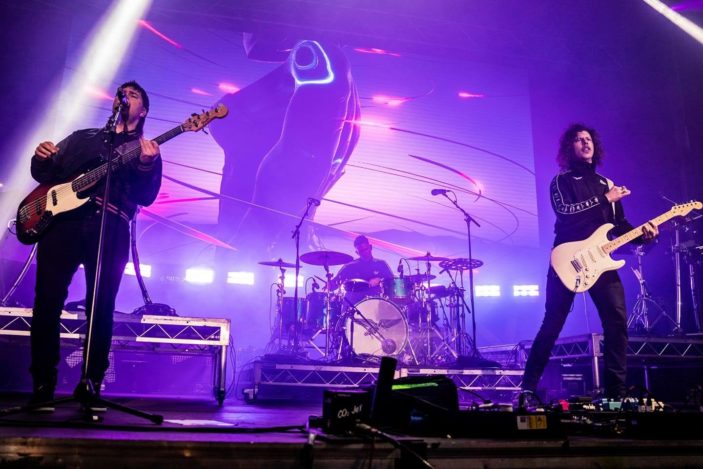 The crowd was then asked to get everyone on their shoulders for one of the crowd’s biggest hits, “High”, with Michaela playing the role of Nicole Millar, as we enjoyed an OD of pyro, fireworks and all that great lighting. There was “Take Me Over” with Chris Sebastian again, as pyro shot out of their guitars, and then there were the fireworks to end things for for “Stranger”. They really don’t waste a minute of their set to deliver an series of unforgettable live moments, with huge energy and one hit after another.

Though there was the odd sound problem on some stages, as you’ll find at any event, it’s fair to say that the first day of the sold out Yours and Owls festival went off without a hitch, filled with an incredible array of local talent; Peking Duk proving every bit deserving of headliner status and leaving the crowd eager for day two of one of Australia’s finest regional events.

Stay tuned to the AU for more from Stuart Park in Wollongong. The festival concludes tomorrow. For more details about the event head to its official website.

The reviewer attended the festival on 29th September 2018. Photos by Daniel Hanssen except where mentioned.