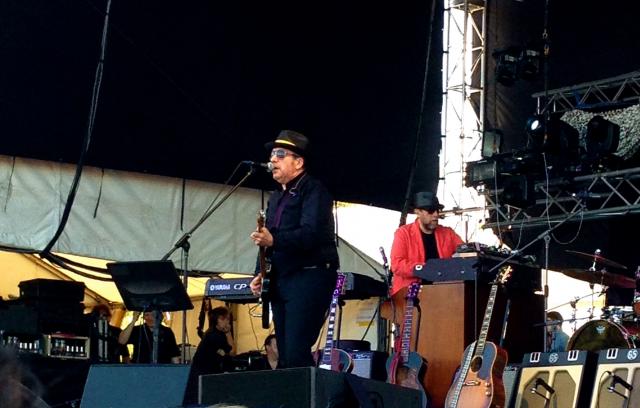 Sunday saw the West Coast Blues and Roots Festival return to Fremantle for its 11th year. Though back to its now customary one day format and with a smaller line-up than in recent years, the festival still managed to draw a none-too-shabby 15,000 people through the gates.

Blues and Roots has always been a reasonably diverse festival, both in terms of punters and artists, and this year was no different, with old favourites like Elvis Costello, The Doobie Brothers and Steve Earle sharing the bill with up-and-comers like Jake Bugg, Boy & Bear and Matt Corby.

Local 5-piece Amani Consort, winners of this year’s Breakthrough to Blues & Roots competition, kick started proceedings with a short 15-minute set. It proved to be a brief but entertaining introduction to the band. Front-woman Aysha Amani was an enthusiastic presence on stage and gave a strong vocal performance. It might have been a brief appearance, but they certainly took it seriously, working hard to warm up the early crowd.

Next up were New Orleans’ Soul Rebels, in Australia for the 2nd time in as many years. Having caught their show last year at the Perth Festival, they were definitely one of the days draw cards for me, and they didn’t disappoint – exploding straight into their cover of the Eurythmics classic “Sweet Dreams”. Despite their early slot, the band as you would expect, worked the crowd and had them warmed up and dancing by the time they played their closing song – the funkiest cover of Pharrell’s “Happy” to date.

Jake Bugg drew the biggest crowd of the day thus far, with fans packing their way into the Big Top to catch a glimpse of the Singer-Songwriter. His popularity should have come as no surprise what with his debut album hitting #1 in the UK and his second charting not far behind. It was a no-nonsense kind of set, with Bugg opting to play through a mixture of tracks from his two albums than chat with the audience. “Trouble Town” and “Slumville Sunrise” were just two of the highlights of the set; though “Lightning Bolt” perhaps got the biggest cheer from the crowd.

Another of the major draws to this years for me was Gary Clark Jr. the Grammy Award winning artist has been on my must see list, since the release of his Bright Lights EP. I ended up watching from a distance, the unseasonably hot weather had me hunting a shady spot, but Clark lived up to expectations with some fine guitar work, and a near flawless vocal performance; his vocals on “Blak & Blu” a particular highlight. Though finally get to hear “Bright Lights” live was up there too.

The opportunity to see Elvis Costello & The Imposters is not one that should be turned down lightly; and whilst I’m a fan of Boy & Bear they were never going to win in his clash head to head. It was a Greatest Hits kind of set, kicking off with “Pump It Up” before barrelling into “Oliver’s Army”. Costello delivered a nod to his most recent album, dropping what sounded verse of “Walk Us Uptown” into “Watching the Detectives”. The set also featured a nice tribute to the late Jesse Winchester, with Costello and the Imposters covering “Quiet About It” and “Payday”. Whilst Costello was joined by John McFee from the Doobie Brothers on guitar to close out the set with “Alison” and “(What’s So Funny About) Peace Love and Understanding.

John Mayer drew perhaps the largest crowd of the day and ordinarily I would have stuck around to hear more than just the opening handful of songs; though “Queen of California” from 2012s Born and Raised and “Wildfire” from his latest record sounded great.

My final must see band of the festival was Edward Sharpe and the Magnetic Zeros; with their set probably the highlight of the whole festival for me; the band were into it, the crowd were into it – the atmosphere under the Big Top was palpable. It was like a tent revival in there; with almost evangelical levels of fandom on display. The band wasn’t even halfway through opening song “Man On Fire” before frontman Alexander Ebert was wading into the audience. In many ways the set didn’t deviate too much away from what I’d seen them play before; though the impromptu cover of Nina Simone’s “Ain’t Got No. I Got life” was a delight. “40 Day Dream” was a highlight, as unsurprisingly was “Home” which saw Ebert throwing a fans wedding bouquet into the crowd; that would have been some wedding reception.

I’ll freely admit that I’m wasn’t a fan of the festivals choice of headliners, neither Michael Franti or Dave Matthews Band were bands I’d ever really listened to, but in the interest of trying new things, I stuck around for some of Michael Franti’s set and I can’t say it was enough to convert me. Sure it was upbeat and energetic, but it also felt a little bit too chaotic for my tastes, with Franti flitting between genres and styles – there just wasn’t the consistency there for me. That being said the crowd loved it, and by a couple of songs in the Big Top was filling up nicely. It just wasn’t for me.

All in all it was another great year for the festival. Whilst I would have maybe changed the playing times of some of the bands a little (Soul Rebels later in the evening) I have no real complaints. The site was well laid out, and despite 15,000 people attending it never felt overly crowded or congested (that is unless you were trying to get cash out from the ATM). Now it’s just a case of waiting for next year.