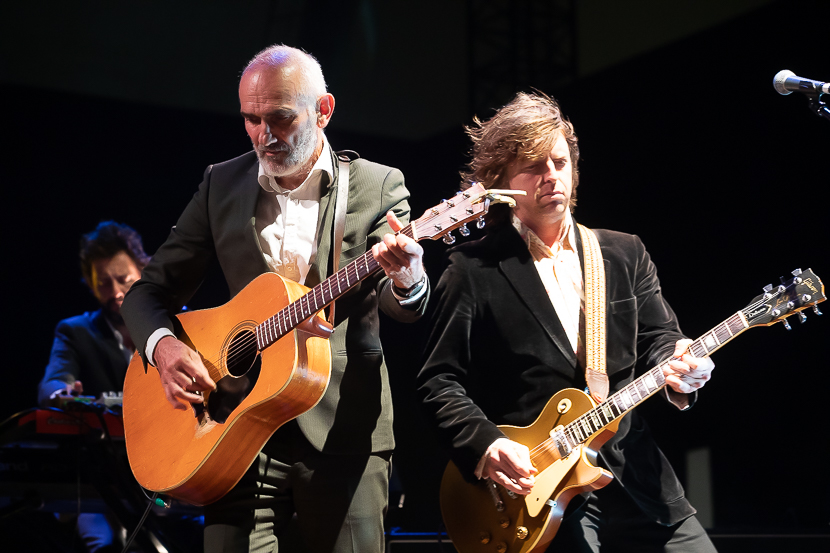 Rain will put a dampener on just about any outdoor activity. But when it’s a summer festival, and the rain is torrential, well, that just plain sucks. Unfortunately, Mother Nature must have been upset with the Sydney crowd attending Paul Kelly’s Making Gravy and pulled a classic stitch up on those in attendance and the festival itself.

With entry lines to The Domain an absolute joke, it left me wondering if it was the weather or poor planning that lead to standing in line for more than forty five minutes, as every single person was patted down and scanned, every bag searched and any food or drink confiscated by seemingly over zealous security. I realise they’re only doing their job, but when a family of five is told to throw out their home made sandwiches and their water bottles, you have to wonder how much common sense costs.

With the weather causing havoc for the stage crew, the festival start time was pushed back. Meaning it was more than an hour later than planned before Angie McMahon got her chance to play a fantastic, but extremely abbreviated five song set. Playing all her released tunes (including the fantastic “Slow Mover”), Angie closed her set with the hit-in-waiting “Pasta” (I’m telling you now; it’s going to be a great day when she releases it). Up next was D.D Dumbo, who again, as a result of the weather, played a shortened set. Wooing those down the front with the best off his Utopia Defeated album, you felt sorry for the guy as the vibe of the festival continued to change from excited to agitated.

With the sun making an all too brief appearance, the most fun set of the day came from your best mate, Alex Lahey. Playing with a larger band than her most recent tour, Alex was her usual brilliant self, tearing through select cuts from I Love You Like A Brother, as well as throwing it back to her earliest tracks, in the form of “You Don’t Think You Like People Like Me”. Closing it out on “I Haven’t Been Taking Care Of Myself”, Alex Lahey not only did herself proud, but also lifted the soggy mood of the day with her wit and relatable storytelling.

Up next was a torrential storm that genuinely felt like it could have led to the show being canned. Standing in the crowd next to 15 thousand other drowned rats, you couldn’t help but laugh at the situation. The things you do to see Paul Kelly make some gravy.

Following the storm and a frantic clean up of the stage, Angus & Julia Stone played a well-weighted and extremely spread set. Throwing it back ten years to “Private Lawns”, as well as an alternate version of “Big Jet Plane”, I was reminded of why I’ve loved the brother and sister duo for as long as I have. Throwing in a Dope Lemon track, I thought Angus was a little hard done by when a punter not too far from me said something to the effect of “without his beard, Angus is just a guy with a hat from Western Sydney” (Weird flex, but ok). Closing out on possibly the best song off their most recent album, Snow, “Chateau” proved to be the crowning moment of an otherwise fantastic set.

With the main meal about to be served, you could feel the energy slowly building for the legend that is Paul Kelly. Entering the stage like a thief in the night, you could feel the consummate professionalism just ooze off him. Having seen him before, I knew he played for the fans, and would play a hit laden set.

Playing pretty much any song you could have asked for, Paul Kelly touched on just about every big moment from his career across the eighty minute set. Placing “Before Too Long” early on in the set was masterstroke, while my personal favourite, “Deeper Water”, left me pretty chuffed. The biggest sing-a-long was of course reserved for “From Little Things Big Things Grow”, while the pinnacle of the night came in the obvious form of “How To Make Gravy”. It was made pretty clear that Kelly is an absolute gentleman and legend, as he repeatedly thanked his support crew and band throughout the entirety of the set. Playing a brief encore that included the Darlene Love classic “Christmas (Baby Please Come Home)” and the peak Kelly track “Leaps and Bounds”, Paul Kelly and band left the Sydney stage (and our hearts) for the last time in 2018.

Despite the day feeling a little rushed as a result of the weather, you couldn’t but feel that Making Gravy was almost the perfect way to enter the silly season and close out the year.