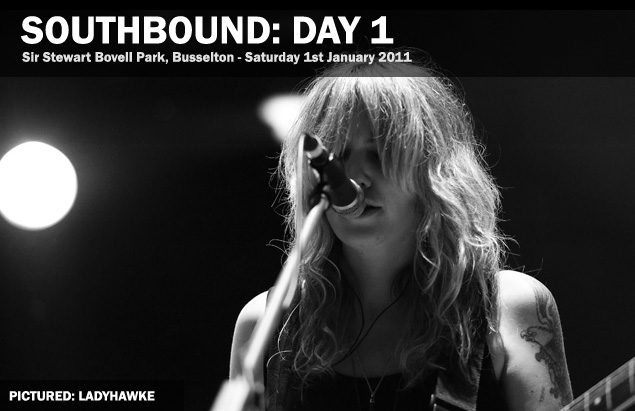 Not even a day into the New Year and Western Australia is already kicking off its live music year, with the three day long music, camping and arts festival Southbound. Thankfully having been to Glastonbury in the last twelve months, I had some idea of what to expect from a camping festival, that being said the queuing and lugging of bags across the site to a suitable camping spot left a lot to be desired. Though my tent was up in record time. It was clear at this early stage that two things were going to be true of the weekend; it was going to be hot! And it was going to be a lot of fun.

With the tent up, and fastened securely against the occasional blustery onslaught it was time to head to the main festival site. Which for the most part is brilliantly arranged, with no real bottlenecks, and each of the three stages set far enough apart for the acts not to bleed too much into one another.

My first act of the festival was an old favourite of mine, Freo ex-pat Carus Thompson, who rather admirably got the early crowd up and dancing. His set was littered with old favourites and a few well chosen new songs; keeping the whole thing both upbeat but laidback also. In solo mode, armed only with an acoustic guitar and a harmonica, Thompson has the songs and the presence to not only thoroughly entertain, astonish and captivate all in the space of about half an hour. Highlights of the set were a very apt Grow to Overthrow and a prison love song I Found Love. That being said now I have heard a few of his new songs I can’t wait for the new album.

Up next on the same stage was Perth locals The Ghost Hotel who put in a confident and assured set to what was unfortunately a less than enthused crowd. My guess is the afternoon sun and unpacking took it out of most of them. That didn’t stop the band from giving it there all; and vocally they sounded spot on for me, with each of the singers distinct vocals sounding amazing on their allotted songs. Let Your Hand Be Your Guide was probably their stand out track of the set – full of energy and with some fantastic vocals and harmonies. Close second would have to be Dead Letter Heart which sounded pretty fantastic as well.

After a little bit of a recoup and water expedition it was time to move over to the scissors stage for yet another local band, Young Revelry, having only heard their studio work I was eager to get a chance to hear them live. They didn’t disappoint, they were brash energetic and a great deal of fun live. Bringing a much needed injection of rock to the proceedings; they were reasonably confident on stage with Astone bantering with the audience and guitarist Leveson-Gower very much looking the part. The crowd certainly seemed to be enjoying the band’s offering, and what’s not to like with some killer guitar riffs and great vocals.

Rather than head over to festival darlings Angus and Julia Stone I decided to stick with another bunch of locals, The Novocaines, a band quickly becoming a force to be reckoned with, with the band gaining major national radio airplay, and putting on live performances that never fail to entertain. It always amazes me that no-one in the band collides into each other during the set, which at times is unparalleled for the sheer amount of energy which goes into it. Lead singer Corey Marriott has quickly evolved into a natural front man since I first saw the band a couple of years ago, he seems to have gotten much confident and was incredibly engaging, both in his delivery but also in terms of audience interaction. The crowd was slightly small, given that not too far away Angus and Julia were making a packed out tent go a little bit crazy. But those were there certainly enjoyed it and readily showed the band their appreciation.

Slightly later in the evening it was across to the Paper Stage for Hot Hot Heat a band I have heard so much about, but never heard. Having now seen them live I don’t know why I didn’t get around to it much earlier. They were incredibly fun live, incredibly energetic and passionate winning the crowd over in an instant. The bands have immensely catchy songs, and an incredibly captivating front man in the form of Steve Bays. Judging from the cheers and dancing of the crowd I would say that there were few in the crowd who didn’t enjoy the set and who didn’t have a great time. It’s just a shame that the set times are not quite long enough, I was left wanting more – but I suppose that’s a good thing.

Next up was Ladyhawke and I must say I was pleasantly surprised, having sampled some of her recorded work before (granted it was only iTunes snippets) I was fully expecting to hate the whole set; instead I ended up loving it along with majority of the crowd. There were a few technical difficulties at the beginning of the set, the first noticeable ones of the festival, but they were soon fixed. Whilst she is a somewhat static performer, rarely moving from her spot on stage, she got the crowd energised with the sing-along on My Delirium rivalling the volume and intensity of any sing-along moments from Angus and Julia (though perhaps not in pitch). All in all a confident performance with some fantastic moments.

My final act of the night were the headliners Interpol, who I liked but if I’m honest wasn’t as impressed with as I was expecting to be. It just seemed that following the energy of the previous two performers, Interpol just seemed too controlled and restrained. They were incredibly confident on stage as you would expect from a band of their stature; and they certainly dressed the part – probably the smartest dressed of the day, and maybe the festival. The crowd were definitely into the set, which was highly polished and professional – though was seemingly plagued by some technical difficulties if the gesturing from singer Paul Banks was anything to go by. But all in all it was an incredibly pleasant way to end a great opening day of music.