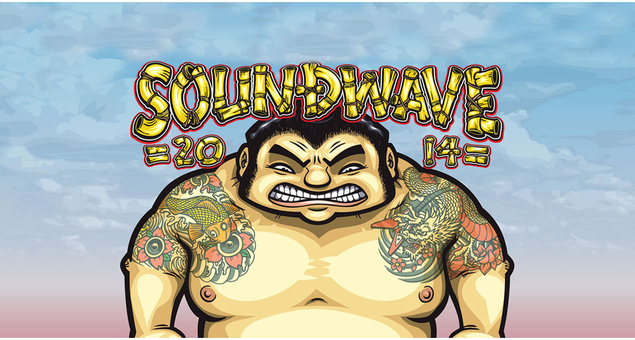 Much of the music being played at Soundwave was something that did not say “tepid”. It sure was hard, fast, strong, and at times, weird. Everything that happened at this festival was metaphorically going straight into the depths of the audience’s chests, whether they liked it or not.

Not being too sure what to head to first, a wandering body found itself at Five Finger Death Punch, who growled through a set with fist pumps and middles fingers. The set consisted of low frequency tones disguised as songs that couldn’t be deciphered from another along with these middle fingers and fist pumps. This all included a plethora of people jumping up and down and creating dust storms. It was a set that had a whole lot of impact and vigour.

Alter Bridge brought about songs that reminded me of wrestling moves but also of wailing guitar solos that got the audience into the spin. The overdrive was put aside for a moment while crisp clear melodic trills all over the place. It was enjoyable enough, but a slight slow-down from the hard and fast to the day. The same thing happened with Richie Sambora too, and while entertaining, it got a bit tiring after a while. The couple of songs observed by Pulled Apart By Horses brought some arty rock though which made things feel very different and compellingly enigmatic.

Venturing towards a smaller stage to discover a new band proved fruitful. London’s Nostalghia popped up on stage played some amazingly haunting songs for half an hour. The weird but wonderful thing about this was there were no guitars in sight. All that featured was a drum set, a cello and a soaring female voice that whispered through the noise. This magnificent small musical diamond achieved a disproportionate respect from the small audience, and while everything about all this was small, the musical output was stupendous. AFI had a stock-standard set of songs played with a fiery passion. It was a slight shame that songs started to sound much like each other for a while, and I wondered whether that fiery passion could have been diverted to some variance in melody of songs. But regardless of all that the audience lapped it up wondrously.

The dudes from Clutch gave us straight up bearded pub rock with trucker hats that you can get from a dinghy venue. It was like we imported bands from the eighties into Maryland and then imported them back into a random Australian in the 21st Century, and then gave them all doubly-carbonated soft drinks. Monotonous would certainly a word that you’d not use to describe Clutch. People were thrashing around enjoying themselves immensely amongst the buzzed atmosphere on stage.

Placebo was a similar musical animal but no-one was thrashing around on stage like the Clutch boys. Being all-placid like was a weirdly entertaining thing to witness amongst the madness. Audience members looked on stoically and nodding their heads to tracks like ‘The Bitter End’, soaking it in rather than lashing their bodies around. It was like they were studying the band on stage rather than enjoying tight, good show Molko and co were giving us.

Korn was also reminiscence overload. Songs like ‘Freak on a Leash’ and ‘Got the Life’ made us all nostalgic for the early noughties. The band still have their swagger and grit, and needless to say the set was pretty fun and the band seemed tight – even if much of the crowd mightn’t have remembered the time when these songs were first released. This band certainly looked like they wanted to be there.

Seeing Eagles of Death Metal proved to be a more rough and raw experience. Riffs aplenty electrified dance moves rather than simply jumping up and down on the spot. I hadn’t seen the word “party” be uttered on stage so much in a set.

Why anyone would offer a three-hour slot to a band whose back catalogue consists of two to three minute pop punk songs, I will never know, but Green Day sure did a lot with that time. Much of it actually not playing songs. Extended periods of banter with the audience and random shout outs to people the audience have no idea about peppered the set. Billie Joe Armstrong at various points invited people onstage, spending minutes with them to teach instruments or learn lines from songs and then getting them to interpret a Green Day song for the thousands watching, which was interesting enough, but probably only needed to happen once in the set rather than repeatedly. This is probably a unique way to interact with the audience, and kudos for providing something different, but I’m unsure is this was the best way to approach a three hour set.

Passing through the grounds, one fulfilling band that ended the day on a high note was Living Colour. Swaggering though a set of songs, coupled with an amazingly soulful voice from lead singer Corey Glover that felt refreshing to the ears compared to the growls and shouting of many other acts of the day. ‘Cult of Personality’ was as much a celebration rather simply a song in their set, and you can see it on the bands faces. It made me leave the festival with a satisfied face too at least. While there was some standout acts like Korn and Eagles of Death Metal the amazing two performances were unique. In Nostalghia’s case – a three piece outfit without a guitar and two females – and in Living Colour’s case – a band consisting of African-Americans playing amazing – provided the most fascinating sets of the day and left a musical imprint on my mind.

But who am I to argue about the bands that play Soundwave? It is the country’s biggest touring festival right now, arguably surpassing the Big Day Out. They’ve touched on a festival formula that draws huge crowds for most bands and not too much aggravation from pundits. The only thing that irked was the diversity of the bands on display. And while the idea of the diversity of bands performing at a festival, no matter what style of music, or sex/ethnicity of the musicians is probably worth its own article – it’s not worth going over in a festival review. It was just a forefront thought that wandered around in my head as I headed home.

And again the organisers have got a good indication of what a successful festival should be, know what they’re doing and know what bands draw crowds. It was just the bands that provided something different that were the highlights of the day, and that’s something to be celebrated and hoped for in future festival line-ups of all styles.