Day 2 of Soundwave brought in more Sydney goers compared to Saturday’s festivities. With the lineup being catered to mainly pop punk fans as well as the metalheads too, it was riveting to see what the second day had in store. I liked the idea of spending my weekend at Soundwave; it was like taking a holiday by seeing your favourite bands live. 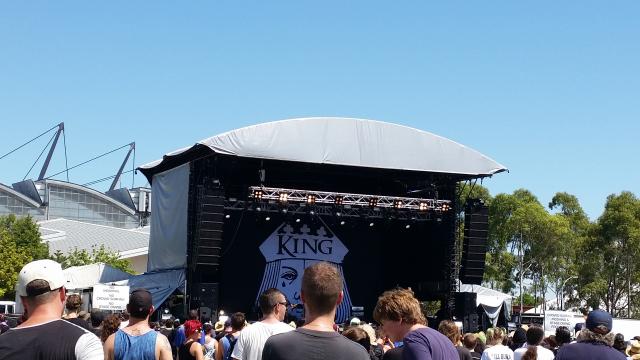 The weather itself was confusing as hell and it was already a scorcher by the time King 810 went on stage. Surprisingly, lots of people were there and still followed through in seeing the US band rip their souls out through their live performance. With their metal music, they tore apart on stage with a nice backdrop of the King of Spades, adding a little personality to their set. 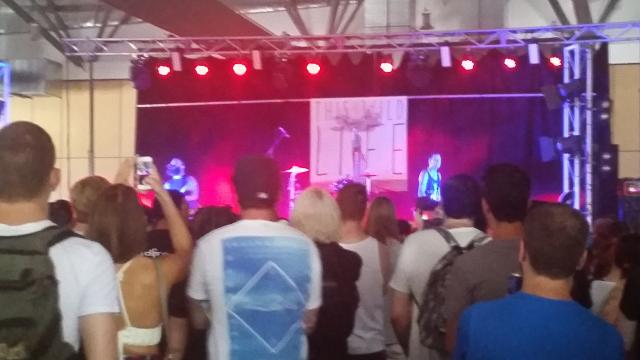 Acoustic pop-punk duo, This Wild Life were absolutely stunning. Since their last visit to Australia, their fan base has grown by a mile and it was refreshing to see them stand out from the heavy Soundwave lineup. They lit up the stage using purple lighting on their set, with “History” being their opening track. Fans were hushed with silent joy by something so serene and simple. However, it was a little disappointing to see that the sound quality wasn’t on-par with Kevin Jordan‘s vocals as a few songs into their set, the band’s instrument playing overpowered the vocals. For a band of this calibre, it would’ve been better if they were in an intimate setting rather than a festival.

In the middle of their setlist, there was a surprise proposal on stage which caused many ‘aww’s and a thunderous applause by the crowd, this was then followed by the dynamic duo playing “Puppy Love”, dedicated to the newly engaged couple. It was delightful to see an acoustic version of “Sleepwalking” by Bring Me The Horizon played by the duo with the crowd singing along as well. With “Concrete” being their last song, it definitely brought a lot of feels, tugging on the heartstrings for many.

With AJ giving them the opportunity to do a leg of Soundwave shows instead, The Wonder Yearsredeemed themselves as they welcomed the Sydney crowd with vibrancy, making up for their overdue absence. For a pop punk band, they fused the alternative rock genre into their songs really well and it was heart-warming to see loyal fans sing back the lyrics to frontman, Dan Campbell. The band were finally here in full form and it was well worth the wait for many.

Entering the stage with the Happy Days theme song in the background, Twin Atlantic were happy to play to the Sydneysiders for the day. Unfortunately, the heat was unbearable and most people decided to chill under the shade instead, which lead to only a few hundred people watching the Scottish band’s alternative set. Sam McTrusty had symphonic vocals though and his talent as a lead vocalist wasn’t hidden away through the well-known track, “Hold On.” It was nice to see their album artwork of their latest record release being used as a backdrop for their set. It was a shame that the audience seemed a bit disinterested in their performance. Regardless, the band seemed happy enough to have gotten the opportunity anyway. 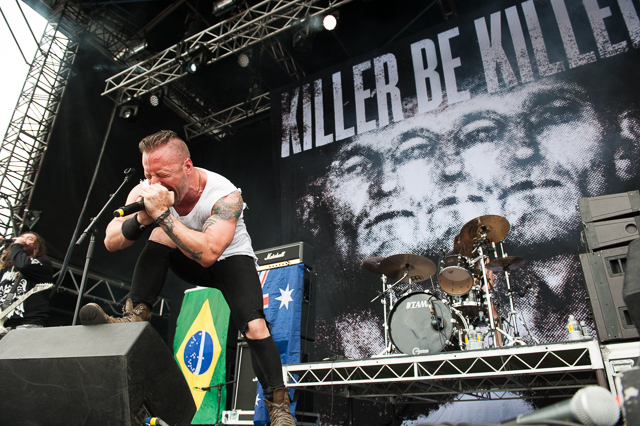 Before metal supergroup, Killer Be Killed came on, there were jazzy covers dispersing from the speakers with the likes of popular songs such as “Let’s Get Retarded” by Black Eyed Peas and “Stronger” by Kanye West, putting in an easy-listening vibe. Things escalated quickly as soon as the band hit up the stage, resulting in such aggression and energy. Having seen The Dillinger Escape Plan last year, I was expecting chaotic behaviour from vocalist Greg and this was shortly met as the crazy fella managed to tower over the stage, commanding the crowd to “destroy the fucking place”. 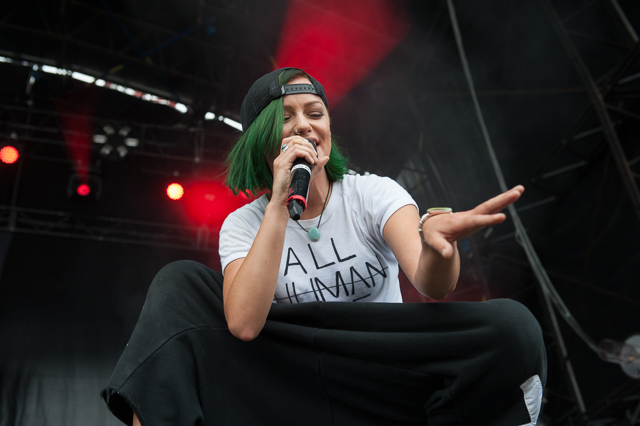 Following their music since 2011, seeing Tonight Alive play main stage at Soundwave was a sentimental experience for me, and to be able to witness my favourite “local” band reap international success made me realise how important it is to support local music. With “The Ocean” being their opening track, Jenna entered her vocals sounding phenomenal. Many people of course were having a time of their life in the mosh pit even if it meant getting a few cuts and bruises. Hearing their older tunes like “Listening” and “To Die For” brought me back to their 2012 Manning Bar show in Sydney and it occurred to me that the band’s live audience had tripled in numbers. In the midst of their set, Jenna, the inspiring person she is encouraged people to say “From this day, I refuse to live in fear of someone else’s judgement,” and this was then followed by the band’s live punch at “What Are You So Scared Of?”

The highlighting moment of Tonight Alive’s set was their take on Rage Against The Machine hits such as “Killing In The Name” and “Know Your Enemy” and to the surprise of many, Bert McCracken(of The Used) made a special appearance for “Guerilla Radio”. Closing their set with “The Edge”, it was clearly a favourite as the misleadingly “tame” crowd went in with no boundaries, with punters crowdsurfing as well as jumping enthusiastically in the mosh pit. 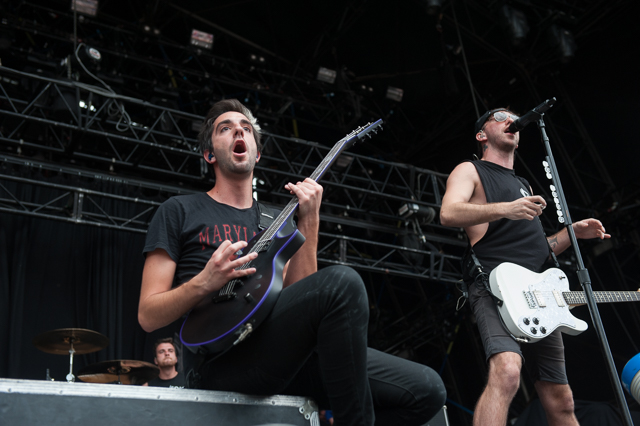 Looking cool in his hipster glasses, Alex Gaskarth took to the mainstage in style with his band All Time Low. Flashback to Soundwave 2010, it was surreal to see them play on a bigger stage. Opening up with “Lost In Stereo”, many sang to their heart’s content. With a cheeky persona, of course Jack Barakat provided comical relief for fans. It was nice to see “A Love Like War” live and this was encouraged by a sea of hands swaying from side to side behind the barricade. Hearing the thunderstorms get louder, Jack yelled “we have angered the gods!” before they continued on with their set however, unfortunately for punters, the band’s set had to be cut short because of the extremities of the rain. However, being the resilient man he is, Alex came back on stage after the rain and provided a beautiful acapella to “Weightless” which eased the pain for many with his incredible vocals. Ending their set short, he also then progressed into a chant which involved the rhythm of everybody’s hands and feet, putting a spin on the classic Queen hit, “We Will Rock You.” 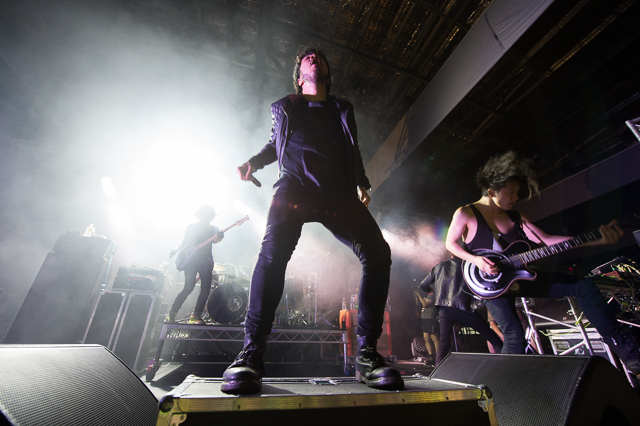 Seeing Crossfaith left me in awe. I knew for a fact these guys were pretty big in Japan but the room was packed full of fans, ready to see what the band had in store for them. Amongst their metalcore setlist, they managed to fuse together trance/dubstep-like elements into their music and this resulted in fans going absolutely ape shit. They were were similar to UK electronicore band, Enter Shikari with such a lively performance on their part. The crowd formed such a huge wall of death that I questioned how on earth people survived it. 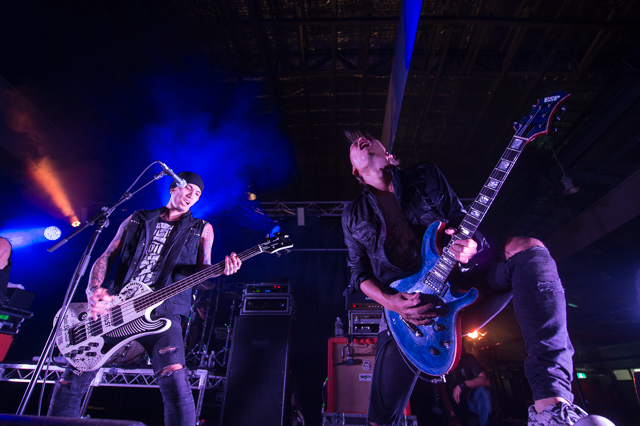 Continuing on with the Japanese bands, coldrain was symphonic in their approach when they hit the stage and it was like their music was an adventure waiting to happen. The chemistry amongst the band and the crowd was incredible as they united together in each post-hardcore infused track. Their music itself was atmospheric and charmingly rhythmic with Masato announcing to the wild crowd, “I’ve got to say, I’m falling in love with Australia.” 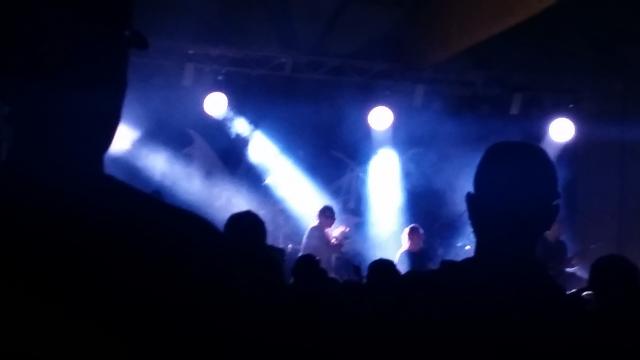 Slow-paced in their approach, Mayhem had such a hypnotic stage presence that it was hard to look away during their set. They were essentially in their own bubble as the black metal band brought emphasis to their complicated music. Having only about 40 minutes to play during their set, there wasn’t much crowd interaction from them. Their morbid and distorted style of music was an interesting pick on my part. Ah, the beauty of black metal. 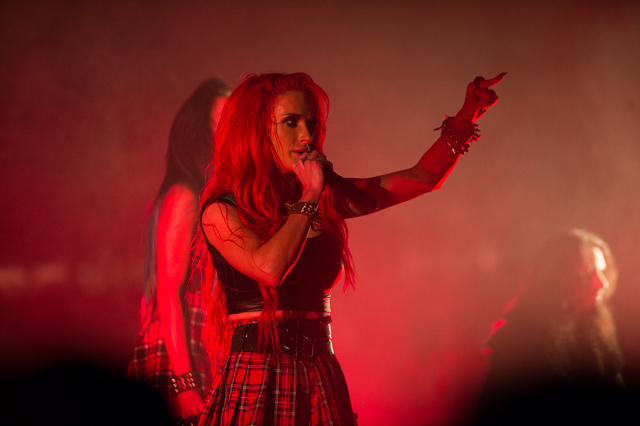 It was incredibly empowering to see Butcher Babies live as this band was fronted by two attractive women, Heidi Shepherd and Carla Harvey. In this day and age, there’s a strive for gender equality and to be able to witness a metal band fronted by two females, makes you underestimate what abilities women actually have. The depth of their screams and the vapid intensity of their stage presence made the audience love them even more and they tore shit up in response. 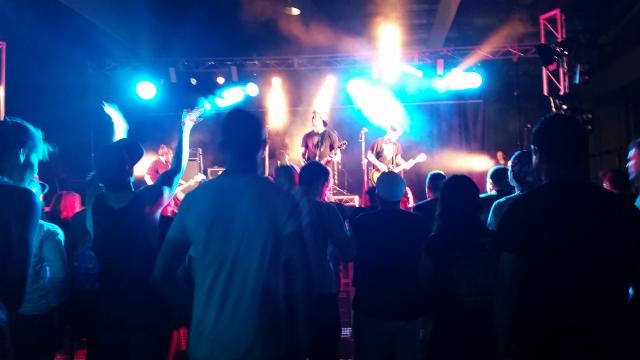 As announced by The Swellers, Sydney would be their last stopover in Australia before their disbandment and despite the sadness that come with goodbyes, the band squeezed in every song they could for the small crowd of people. Loyal fans were pretty much glued to the barricade whilst shouting out every lyric to the band’s underrated pop punk music. Nick Diener claimed to fans that they were going out in style. Seeing “Best I Ever Had” live made me wonder why such a good band like this had to go, but unfortunately, all good things must come to an end. 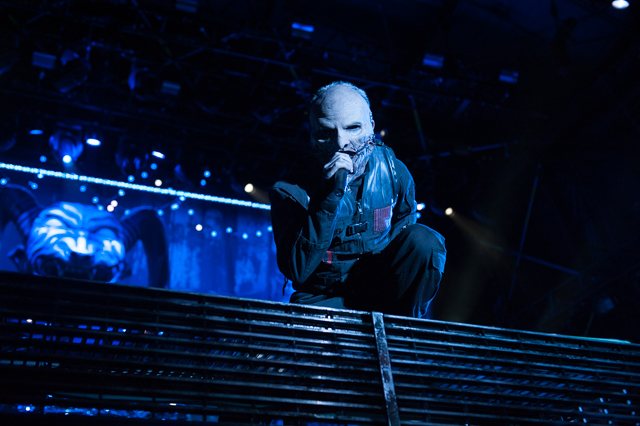 Ending the night with Slipknot was probably one of the highlights of my Soundwave experience. Soundwave is primarily about all the highly acclaimed metal acts and what a way to bring the 2015 festival to life by seeing a heavy metal band slay every song imaginable. In the middle of their set, the band had to come off stage as there were a few issues happening around the barricade (safety always come first). Despite the irony in this statement, true metalheads were scouring to catch a breath of fresh air amongst the circle pits and the wall of deaths that were about to happen anyway. The movement amongst the crowd seemed tame at times but it picked up speed in the last few songs of their set. It’s all about the metal, people.

From soreness and bruises to turning-up-to-work-hangovers and ringing ears, Soundwave will always be a crazy festival for many and no matter what, I’ll always keep coming back.