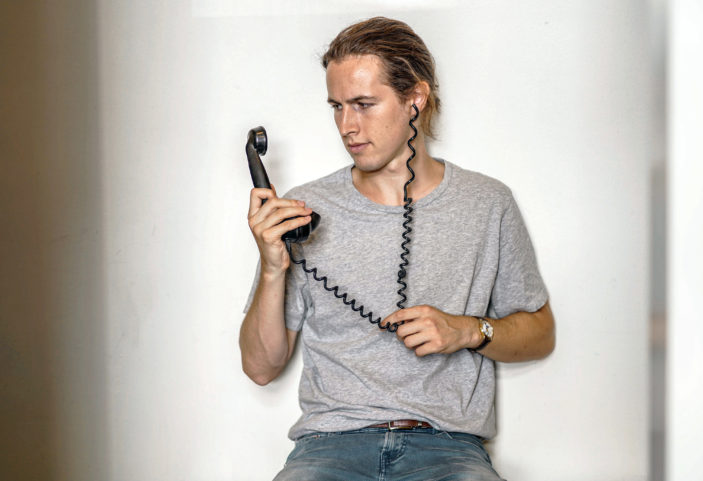 Melbourne-based singer-songwriter Riley Pearce is continuing to tease his forthcoming EP, Maybe I Can Sleep It Off, this time with the release of “Statue”. It’s the third single to be released from the EP, following “Ceramic Real Estate” and “Breathe & Release” earlier in the year. With the new single released today, we’re excited to bring you an exclusive first look at the accompanying music video.

The video for “Statue” sees Pearce teaming up with the Sydney-based photographer and filmmaker Dara Munnis. As music videos go it is pretty prop intensive. You have Pearce trying his hand at a range of hobbies, skills and creative pursuits; often under the watchful (and not at all unnerving) gaze of a statue. Here’s what Pearce had to say about the filming process for the video.

“Everyone involved worked their asses off! It wasn’t exactly easy, all the props were either hidden behind the poles or behind the bar in the distance and we had a small crew running and carrying props behind the scenes. We only had one chance to film the actual take because of the confetti canons so after we’d done enough rehearsals we went for it and did bloody well, once we got to the confetti there was no turning back and thats when I was worried the pressure might get to me and I’d forget how to ride a bike. Picking up confetti is fun.”

It’s another strong release from the singer-songwriter, full of Pearce’s trademark warmth and sincerity. Based on what we’ve heard so far Maybe I Can Sleep It Off is shaping up to be a quite a release. The video really hits the whimsy sweet spot too. There’s humour and a touch of whimsy, but it also really neatly captures the song’s underlying themes and ethos. In short,  don’t allow yourself to get bogged down in self doubt. And, that creativity is a journey; so keep moving, keep working at it, and keep being creative – even if it’s just a moment here and there.

“Statue” is out now. The new EP, Maybe I Can Sleep It Off is out September 25th.