Adelaide band Horror My Friend will tomorrow officially release their brand new single “Wedding”, which is taken from their just announced new record Home Life. Today you get your first listen to the release in the exclusive worldwide premiere of the track and its accompanying music video here on the AU:

The track comes amidst a pile of great news for he band; they just signed to X-Ray Agency for UK and European bookings and have announced an October tour to celebrate their new album, which comes out in September 21st through Poison City records.

Compared to the two-week process recording the previous album ‘Stay In, Do Nothing’, the process for ‘Home Life’ was much less structured. It was worked on during any free moment we could spare after our daily jobs, touring and study commitments had been met. It was a Frankenstein effort, with each session piecing together another part of the record, then letting that rest until the next opportunity to record.

In many ways, this process was perfect for the record we were trying to make. Managing the realities of being a touring band around the realities of everyday life came to underpin the whole record thematically, not just in how it was produced. The record documents the emotions and feelings that often arose from the conflict of constantly being away from home, yet still trying to live a ‘normal’ life.

‘Wedding’ is a track that exemplifies this perfectly. It’s soaked in fuzz, upbeat and noisy, but lyrically is an introspective rumination on the guilt of relationships being stretched to their limits when doing what you love, and when considering which sacrifice to make.

The video clip was recorded by Ryan Saab, a local Adelaideian who came to the music scene’s attention after producing live recordings of shows by Bad//Dreems, West Thebarton and Archers direct to cassette, with these tapes eventually winding up at local record stores. Ryan’s obsession with outdated technology and retro aesthetics convinced the band to shoot a clip together.

Taking the moodiness of the subject matter and completely flipping it, the video is a much more light hearted homage to DIY videos of eras gone by. That this clip was probably the most fun we’ve ever had filming something is no coincidence, given the conspiracy theory-influenced storyline of the drummer, Sam, being replaced by an Alien with malicious intentions towards Tom and Josh.

“Wedding” is out worldwide on the 24th August. Home Life is out on the 21st September through Poison City Records. Presales are available from the 24th Aug – https://poisoncityestore.com/ 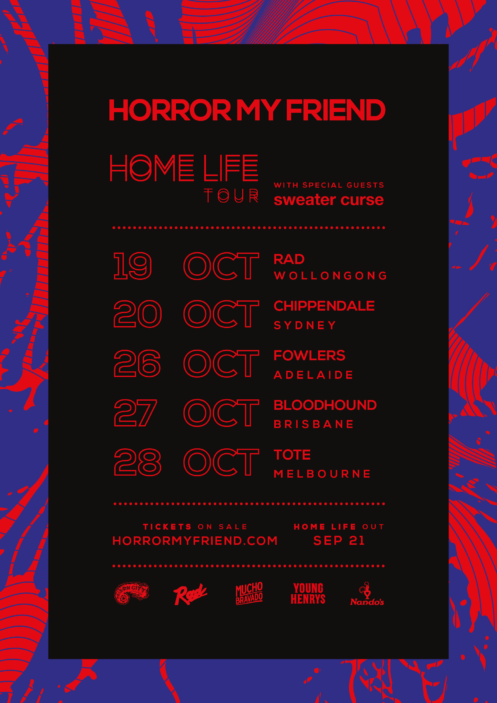