Brisbane artist Emerson Snowe has been making big waves at BIGSOUND 2018, and today he has a lot to show for it.

The performer has been announced as the winner of the Levi’s Music Prize‘s first round, receiving $25,000 towards growing his project.

Also known as The Creases‘ bassist Jarrod Mahon, he has been making waves over the last year with his solo project, gaining support slots with Ariel Pink and King Krule, signing to Liberation Records, and releasing heaps of music on Bandcamp.

Usually performing to backing cassettes, Emerson Snowe impressed the judges with his Tuesday showcase at Woolly Mammoth, where he performed with a backing band for the first time ever.

“This means the world to me,” Mahon said upon collecting the award. “This project is about being true and natural and building a connection with those around me… This money and opportunity will go a long way and will honestly change my life. Thank you so much to Levi’s for giving me this chance.”

This year marks the second year of the Levi’s Music Prize, beginning at last year’s BIGSOUND. Every quarter of the year they will gift an emerging artist $25,000 towards building their music career. Previous winners include Stella Donnelly, Rolling Blackouts Coastal Fever, Alex Lahey, and Hatchie.

“Levi’s has a proud history of supporting the music and creative community,” said Nicky Rowsell, Levi’s Marketing Manager Australia & New Zealand. “This year’s BIGSOUND was the perfect platform in which to step things up in presenting two mental health and well being panels to raise awareness around this important health issue. We look forward to continuing this important work to hopefully make a real difference and positive change within the music industry….We’re stoked that Emerson Snowe was this year’s recipient of the Levi’s Music Prize. We look forward to seeing his career go from strength to strength over the next 12 months.”

In the meantime, Emerson Snowe has an EP planned for release soon, including the singles “Could You Love Me” and “Sunlight”.

Come see what the hype is about as Emerson Snowe takes the stage tonight at Visions and The AU Review‘s 10th Birthday Party / Unofficial BIGSOUND Afterparty at The Foundry, featuring San Mei, Howlite, Deep Sea Arcade, and more! Emerson hits the stage at 10.50pm.

Here are the full set times across two stages at the venue: 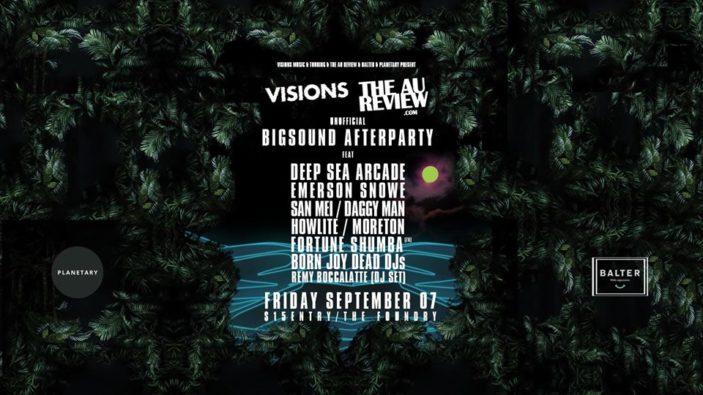