This week marks one year since we were left reeling with the news that Scott Hutchison, front man of the acclaimed Scottish band Frightened Rabbit, took his own life.

In tribute to Scott and the songs of Frightened Rabbit, several local bands are coming together to perform at Tiny Changes BNE, a tribute concert at Brisbane’s Black Bear Lodge on May 18th, with 100% of the money raised on the night going to the Black Dog Institute.

Inspired by the many tribute gigs that have been held around the world since Scott’s death, Tiny Changes BNE will feature performances from: Flora Link, Chief Weapons, Aiden Bradley, Dirty Hearts, Tired Human Beings, and Cameron Milford. There is also going to be a raffle, with what looks like some pretty sweet Frightened Rabbit inspired art up for grabs.

Despite Australia being considered the “lucky” country by many, suicide is the country’s number one cause of death amongst young people. One in five Australians experiences mental illness in any given year, whilst about half of all people will experience mental health problems at some stage in their life. Safe to say, there is still much to be done. Which is where institutes like Black Dog come in, with their push for greater eduction, further research and quicker, more accurate diagnoses of mood disorders.

Earlier this week Scott Hutchison’s family also launched a new mental health charity in the UK and Scotland, Tiny Changes, with their own set of objectives to raise awareness about mental illness in children and young people. For more information about the new charity, and how to donate, you can visit their official site HERE, or find them on Facebook, Twitter and Instagram. 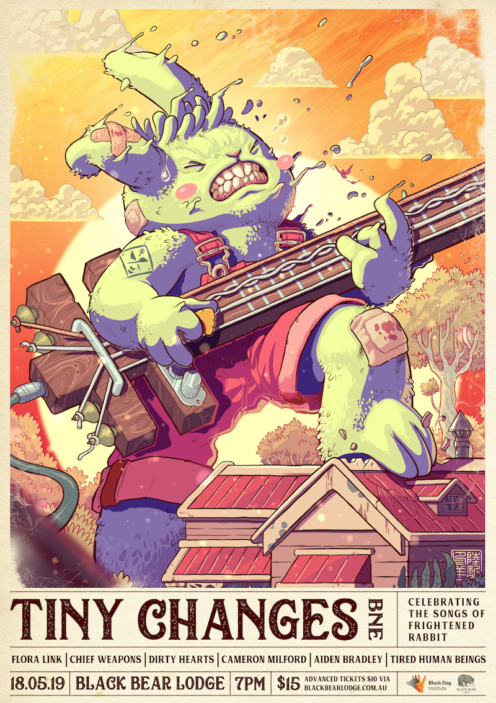 If you or someone you know needs support, or wants to talk to someone, you can find a list of groups and organisations that offer resources, helplines and support HERE