When Sonos announces a new speaker, the whole world takes notice. This is a company that has spent the last 15 years focused on quality over quantity, with years of R&D behind every new speaker that hits the shelves. And tomorrow we’ll be enjoying the latest addition to their product line: the PLAYBASE – a sister product to their Playbar, designed to sit comfortably underneath your home television. 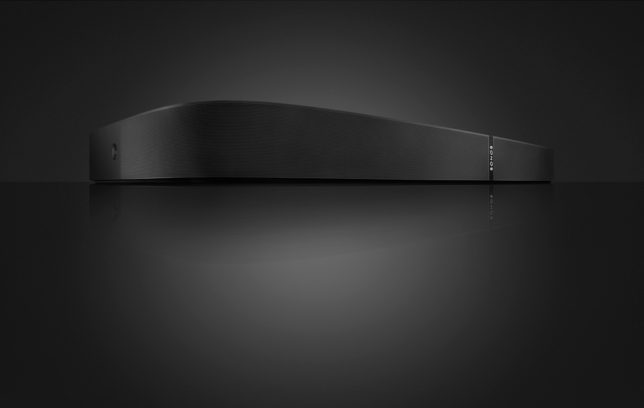 I recently travelled to Sonos HQ in Boston, USA, to witness the official unveiling of the beautiful monolithic speaker, and while I was there I had the opportunity to sit down with English record producer Giles Martin – son of the late, great George Martin, the legendary Beatles producer. Giles is now the go-to man when it comes to any production work on the Beatles catalogue, among a mountain of other incredible musical projects. But he’s also got a second job – working with Sonos as the “Sound Experience Leader”. Basically: he makes sure everything sounds as it should.

The origins of him joining the company is a ‘one thing led to another’ scenario. “I didn’t know much about the company, to be honest,” Martin admits. “I mean a friend of mine had one of the products. So I was aware of it.”

Aware enough of the product that when Paul McCartney’s manager offered to set up a meeting between Martin and Sonos, he took the meeting – all this happening while they were working on McCartney’s album New. As Martin’s story goes, the Sonos team pulled up at the studio with speakers they had no room to plug in – and so they sent a pile of speakers to Martin’s home.

“My wife called me and actually said ‘What the fuck are all these boxes in the hallway?’ She’s Irish. I said ‘They’re speakers.’ She goes ‘Why? Are you going to take them to the studios?’ I went ‘No, they’re home speakers’ You know. ‘Why have we got home speakers?’ To give you a bit of a backstory, when I first met my wife I said ‘What’s your favourite Beatles song?’ She goes ‘Probably Daydream Believer’ Which is by The Monkees.”

“She has no interest, at all, in anything I do. She doesn’t know what I do for a living. Which is why it works. I said ‘No, these are speakers that you can them around the house to play music.’ So, I set them up, and initially I was quite surprised actually at how immediate they sounded. What I mean by immediate, is that they weren’t trying to be Napoleonic and they weren’t like trying to be those sort of little speakers that try to be big speakers and they just sound, you know, boomy. It just sounded punchy and immediate and I liked them.”

“Like three days later we had people round for dinner, and we were having a laugh in the kitchen and my wife was slightly drunk and did all the dance moves to Madonna that she did as a kid. There was just that thing, we’re singing, we danced like we were in a marketing campaign; we actually had music in the house, and we didn’t have music in the house before. I thought, ‘well this is pretty cool.'”

As crazy as it sounds that music may have preciously been absent from Giles Martin’s home, this is, apparently, a common trend. According to a study by Sonos, Causes and Conditions of the Silent Home, “44% of us end up listening alone or on headphones and cutting everyone else off” rather than engaging with music in a social setting. The study inspired the brand’s genius campaign Wake Up The Silent Home, which launched during the Grammy’s earlier this year:

After he confirmed he was impressed by the product’s quality and ability to wake up his silent home, Sonos asked Martin to lend his feedback on their new Play:1s, and he immediately expressed his concerns, which at the time he worried may have offended some in the team, “I thought it was limiting too much at higher levels, and I gave them a list of things, and what it should do.”

Referring to other speaker companies who had wanted his feedback in the past, it was one immediate difference in the brand that stuck out to him, “Sonos was the first company that actually wanted to know what was wrong about their product, opposed to wanting to be told about what was right.”

As he engaged them with criticisms from his highly tuned ears, they asked Martin to be on their Sound Board, “they have a Sound Board of advisors, and here was the likes of Rick Rubin and Hans Zimmer, and I said, ‘well, that’s good company, so yeah, I’ll join that.’ And then I thought, ‘God, I’m on that Sound Board, I better get really involved.’ So, I started getting more involved. I’m not a very good consultant. I just don’t have that mentality, I just like to be hands-on.”

One thing led to another and he found himself employed as the ‘Sound Experience Leader’, “I was like, ‘What does that even mean?’ I’m not American, I don’t understand these terminologies. ‘Well you know, we need someone to sort of curate sound like the artist intended.'” Martin digressed this sounded like nothing more than a marketing slogan, but described the role as sitting with other producers and engineers, like Mark ‘Spike’ Stent and Nigel Godrich, and, in his words, “we’ll listen to music on the speaker to see whether it is how we mixed it.”

It’s a fairly simple concept, but one that requires a keen sense for detail, something that only those in the trade “who can talk in frequencies and spatial arrays” are able to offer. When it comes to the Playbase, he was sitting with these very producers in Las Vegas over a year ago, and asking them this very question, while he was mixing the updated Beatles Love show. And he says, as we speak, they’re already doing similar tests for products not due out for another two years.

His job, and in effect the job of those he trusts to work on the prototypes with, is to find what’s missing. And not just with future products, like the Playbase. Those familiar with the Sonos product may remember when the brand started using the apps to update the in-built software of existing products, enhancing the sound quality and adding features like Trueplay Speaker Tuning. Many of these decisions came from having Giles and his team of artistic audio friends actively changing the array patterns, “We could sit here and crack the software of the speaker and I could make seventh channel louder and make a wider. And that’s what we do. That’s how we get to the point where the speakers are ready to release… And I suppose I present a target for the audio team, as well.”

Martin says it was sessions with the Play:5, that was released at the end of 2015, that encouraged this development from Sonos. The chat, according to Martin, went a little something like this:

Martin: “If we can do this wirelessly here and change the speaker, we can change speakers anywhere.”
Sonos:  “Yes, but why would we want to do that?”
Martin: “Well, you don’t know, we could like find a way, and we could improve the sound of speakers.”
Sonos: “But that’s the wrong thing to do.”
Martin: “Why is it the wrong thing to do?”
Sonos: “It’s because we’d be screwing around with people’s home audio system without them knowing what we’re doing.”
Martin: “But, if we’re making it better … ”

“I always like to be rebellious, so I was thinking, ‘Well, we should try to do this outside of this room.’ And it was actually a very simple… once you got over moral barrier with the audio team. The hard part was the messaging. If you said you’d improved the sound of it, people will say ‘but you said it sounded great to begin with? Is there a problem with our speakers?’. Do you know what I mean? There’s all those issues. The fact of the matter is I think it’s just about being passionate about sound and if you can find a way to make something better, you do it.”

Essentially, Playbase is the first product to come completely out of this new way of thinking for Sonos: making a product to not just last, but potentially get better over time – whether the user notices it or not. And as they keep working on new products, this will keep enhancing the existing range.

“From what work we’ve done on Playbase, we updated the Playbar again because you learn stuff along the way. And it’s like, “Why not?”. There is definitely an evolution for our products. You should always try and get better, and make your products better. So we do. We learn from mistakes, basically, the mistakes don’t go public, but you develop your product, and innovate… and if there’s a way (to make it better), we do it… it’s kind of fun.”

But there’s a lot more than just Martin’s ears (and his many updates) that have brought the Playbase to fruition. By the time Martin came to work on the Playbase, there had already been years of R&D, “I actually saw the Playbase in development when I was working with Sonos on the Play:5. It’s such a complex beast, how much R&D has gone into it.” And when you get your hands around the product this week, you’ll be able to see for yourself. And while Martin promises you won’t be disappointed, if you are, it seems you can probably blame him. Though he reminds us that “I can only really be responsible for the stuff that comes out, if the stuff that’s going in is any good.” And we’ll have more on the quality of streaming services when our chat with Giles Martin continues…

The Sonos Playbase will be officially released on 4th April 2017 for AU$999. For more details, head to Sonos.com.