Emerging Aussie quartet Haiku Hands will be taking their danceable beats and rebellious energy to the United Kingdom and to Europe. From the 18th of October until the 8th of November the collective will be touring the entire continent. From their performance at the Bristol Simple Things Festival to the Corsica Studios in London, the shows are a mix of headline shows and festival slots around the region.

Earlier this year, the all-female collaboration gained recognition with their single “Not About You” and were a breakout act at this year’s The Great Escape in Brighton. Meanwhile, their appearance at events like the Dot To Dot Festival helped earn the girls a national fan base in the UK, as well as a worldwide audience.

Haiku Hands started out as a collaboration of performance and visual artist Claire Nakazawa and DJ Beatrice Lewis. The duo quickly became a trio with Mie Nakazawa, Claire’s sister and fellow visual artist joining, and a quartet when Jazz vocalist Mataya Young became the irreplaceable fourth member. The outcome of four very different artists uniting forces is a futuristic, electro-Hip Hop project. On “Not About You”, Haiku Hands are mixing different mediums to create a spontaneous and unique sound. The cocky self-affirming lyrics about leaving a distinctive mark are sung and rapped, by the girls together, giving them a strong almost chanting riotous ring.

Haiku Hands not only make music but also put on a powerful performance. To support the single, the artists recorded an artsy and entertaining video clip full of edgy modern dance moves. The band is less about individuality and more about what they can achieve together. Live, Haiku Hands like to perform in uniform (in unison), whether it’s blue suits, orange pants or masks. The girls are known for their unforgettable stage show, with often crazy and always infectious dance moves, and a grove that will keep you dancing all night long.

Europe should get ready for this Australian force of nature tearing apart the local venues. Before Haiku Hands head west, they will play four gigs in their homeland from the 22nd until the 30th of September.

See Haiku Hands live in Europe. Get your Tickets and more details here. 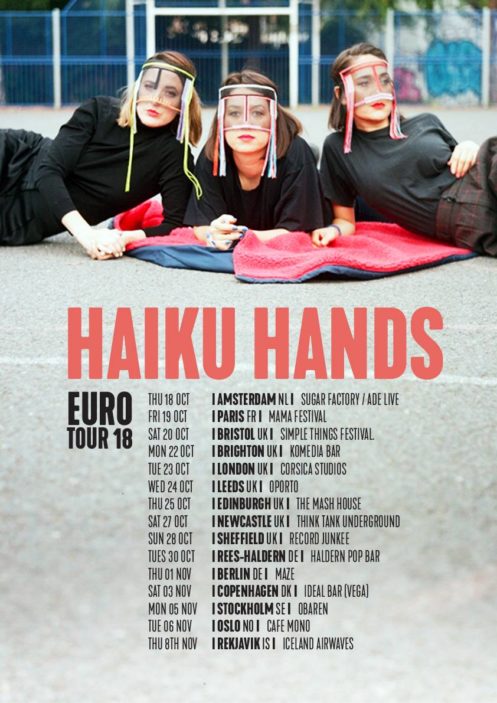 Photo: Haiku Hands at The Great Escape by Larry Heath