Album Review: The Comfort take us on an emotional and enlightening journey with Experience Everything. Live and Die. 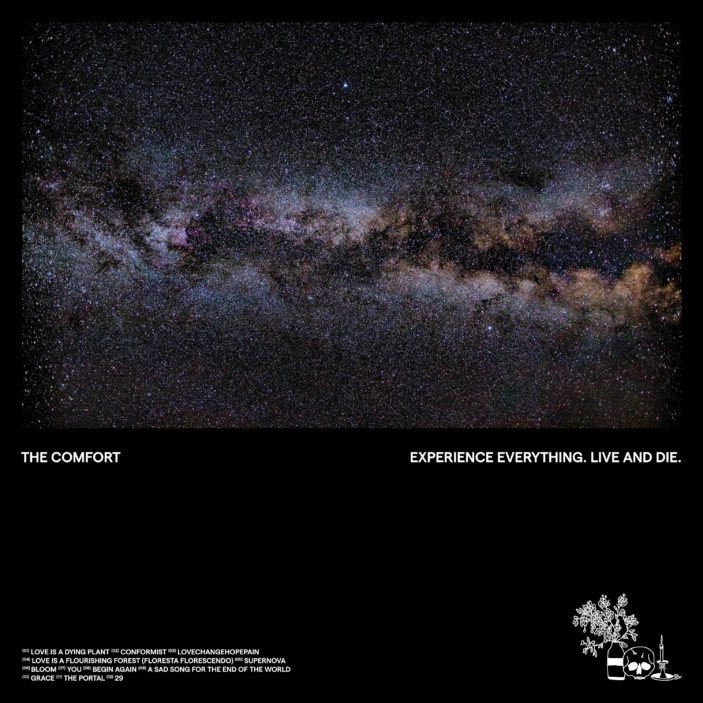 One of the greatest things about music is its ability to transport us to another time and place in the world or our lives and see things through another’s perspective. Brisbane alternative rock quartet The Comfort have boldly stated their intention in the title of their sophomore record Experience Everything. Live and Die. – out today via Greyscale Records – and it lets you do just that.

After going on an indefinite hiatus in 2019 due to industry pressures, new music from the beloved Brissy boys was welcomed with open arms. During the turbulent two years to follow, the band wrote and recorded an album on the human experience with a focus on the present. The 12-track project explores themes of existence, love and society through poignant storytelling and relatable narratives, with guest vocals from AJ Perdomo (The Dangerous Summer) and Dylan Davidson (Deadlights).

Opening the album is first single “Love is a Dying Plant” with rocking rhythms and blistering guitars. Bassist Dominic Harper sings ‘Everyone I’ve ever loved wants to die’ as the song ebbs and flows with raw emotion. Anguished single “Conformist” stuns with picked riffs and melodic vocals before a heavy bridge of frenetic drums and screams. “lovechangehopepain” transitions between the former and what follows as technical drums and hoarse screams usher in the anthemic chorus. This leads to opener sequel “Love is a Flourishing Forest (Floresta Florescendo)”, a more uplifting take with soaring vocals and a tasty guitar solo.

Slow jam “Supernova” featuring AJ Perdomo is an expansive and moving cut with a nice Oasis reference showcasing sweet cleans from guitarist Liam Holmes. “Bloom” smoothly carries on this vibe with heart-wrenching lyrics in one of the most introspective songs on the album. The midway point of the record sees the introduction of keys and marching drums in “You” serving as a reminder that these guys have near-perfected the sad singalong. Next, “Begin Again” demonstrates heavenly falsettos asking the impossible question ‘How must I end?’ as reverb-soaked guitars ring out in the final chorus.

“A Sad Song for the End of the World” is just that – wandering keys, wailing guitars and soft vocals soundtrack the tragedy of the human condition. Upbeat single “Grace” launches into a busy passage with a dynamic verse and stomping chorus as a criticism of social stratification. “The Portal” is a short and sharp cut with strained vocals made all the more urgent by Dylan Davidson’s abrasive and tonal screams. Finally, powerful closer “29” confronts existential dread through peaceful acceptance with soft keys, thudding rhythms and swelling guitars over six and a half minutes.

Given that these guys have been silent for three years, it’s safe to say they’ve returned with one of the most unique and inspiring alternative albums of recent years. Experience Everything. Live and Die. is available now everywhere. Follow The Comfort on Facebook and Instagram for regular updates.