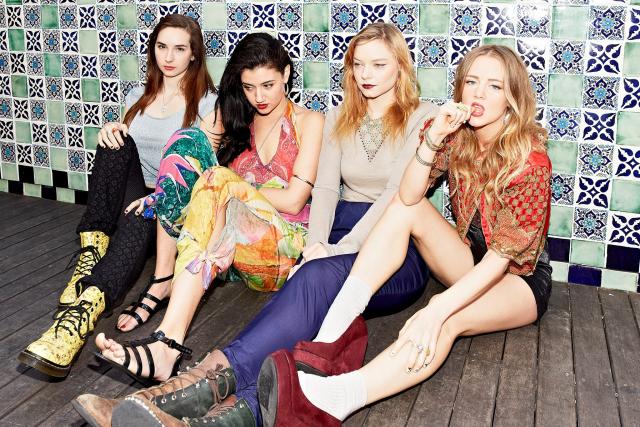 It’s no secret that She Rex are one of my favourite up-and-coming Sydney bands. Having been lucky enough to see them live several times in the past year, I was keen to hear the results of their work in the studio. As expected, they didn’t disappoint.

The self-titled EP opens with the band’s current single, “P.O.W.E.R.”, and its thundering drumbeat, courtesy of Tash Adams and her kit. It’s the token rebel song on the record, placing the band firmly on the side of their audience with the chanted chorus of ‘P-O-W-E-R to P-E-O-P-L-E’. The music is catchy and fast, making it a nice contrast to the closer, titled “Red Alert”. It has a slower instrumental and more complicated rap, bringing balance to the four songs.

Sitting between the two — both stylistically and on the track-list — is “Get Yours”. The steady pace and the simpler lyricism make it the easiest song on the EP to follow. It’s a relaxing middle-ground in an otherwise busy release; and if you’ve heard Nikkita Rast rap before, you’ll understand the value in getting a breather.

The most accomplished moment of She Rex’s EP is the second song, “The Heist”. Its slow-burning rock instrumental truly showcases the group’s talent: Sarah Jullienne’s synths and backing vocals give the track a unique depth of sound, and the wiry guitar work by Darcie Irwin-Simpson establishes the moody atmosphere from the first note. Topped off with Tash’s ever-intensifying drumming, and Nikkita’s crisp rapping, “The Heist” is an excellent indicator of the band’s creative capabilities.

She Rex’s sound doesn’t lend itself to easy comparisons, but it’s probably closest to a combination of M.I.A. and Rage Against The Machine. This flexibility makes them open for fans of rap and rock — or, if you’re like me, music that defies any easy labels and shapes itself.

Take a listen below, and go pick up a copy!