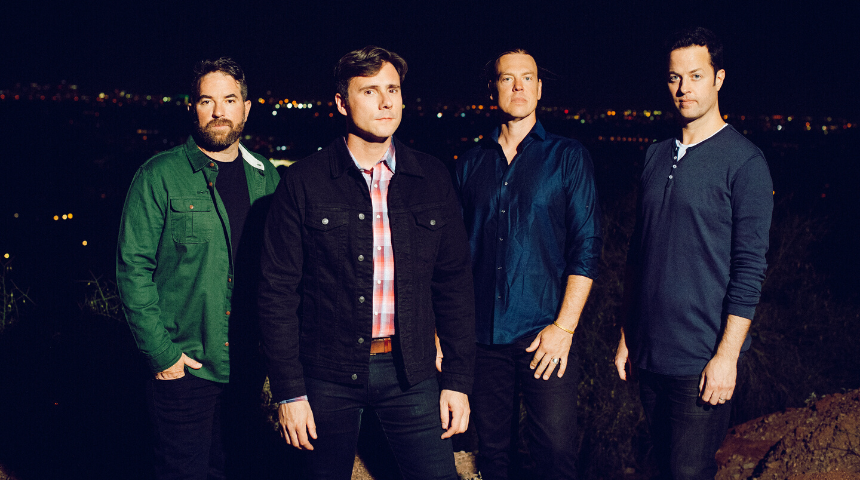 It’s difficult to think of the alt-rock and emo scenes without thinking of Jimmy Eat World. The Arizona band have been peddling their emotive wares for a good quarter of a century now, and tenth studio album Surviving is yet another showcase of solid songwriting and killer sounds.

“[the] album explores some of the different kinds of weights my ego tells me I have to carry,” says front-man Adkins of his latest songwriting journey. “What I see people around me choosing to carry. And what I have found to be the truth when I choose to let go.”

Frequent touring and consistent output have ensured a dedicated fan base, and allowed for a natural maturation of sound. As a result Surviving brings to mind some of Jimmy Eat World’s biggest moments, while also marking a distinct shift away from the moodier sounds of previous album Integrity Blues.

Surviving feels more like early 2000s era Jimmy Eat World. Think along the lines of the heavier sounds of Bleed American and Futures, with just a hint of the slightly poppier Chase This Light, though it’s lyrically much more self-aware and personal.

Track standouts include “One Mil”, with a chorus that could have been ripped straight out of 2001, and recent singles “555”, and “Love Never”. “Criminal Energy” is also an absolute joy, with great riffs and a catchy chorus, while the softer “Delivery” is a real grower of a track. Delicate and better with every listen, it’s a great showcase of Adkins’ immediately recognisable vocals.

A strong addition to the band’s back catalogue, the fact that Surviving sits so neatly amongst its predecessors says much about the work Jimmy Eat World have put in over the years in creating and refining a sound that is uniquely their own. There’s a feeling of natural progression here, and with a more personal touch to the songwriting process, there’s clearly still much more to come from the Mesa four-piece.