Grammy Award-nominated Hiatus Kaiyote have long defied categorization with their jazz-funk-neo-soul-wondercore and their latest LP continues that, albeit as their most cohesive album yet.

The Melbourne four-piece are back with their first album in six years, titled Mood Valiant, after lead Naomi ‘Nai Palm’ Saalfield‘s mother who owned two valiant wagons, one white and one black, of which she’d choose to drive based on her mood at the time.

Mood Valiant is Hiatus Kaiyote’s third album, after the success of 2013 debut Tawk Tomahawk and 2015 follow-up Choose Your Weapon which carved their own niche. All members had dabbled in solo work in the interval, before work on Mood Valiant commenced in 2018.

Its release was delayed by the COVID-19 pandemic, but initial work on the album occurred during stints in the USA and Brazil, where they recorded with legendary arranger Arthur Verocai. 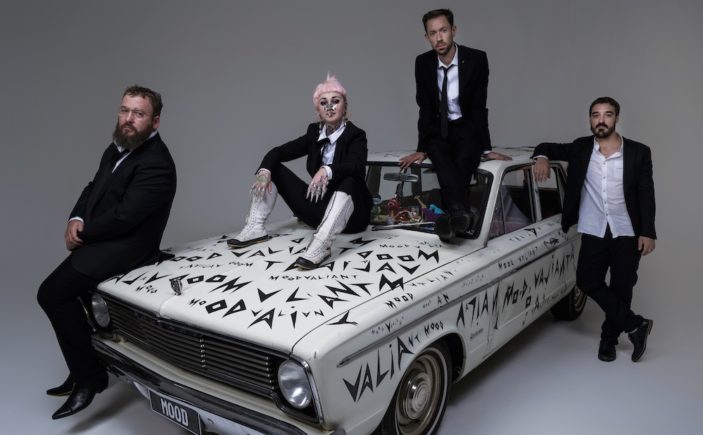 In the band’s album announcement, they claim Verocai “shifted the vibe of the entire album” with his overlay of strings and horn which are interspersed throughout, but most distinctly on single ‘Get Sun’.

The emotive strings on the brief intro track “Flight Of The Tiger Lily” sets the tone, before Nai Palm’s distinct and glorious vocals take over on “Sip Into Something Soft”.

Third track and the latest single “Chivalry Is Not Dead” is a highlight, with Nai Palm bellowing “if I were a leopard slug”, as she amusingly sings about obscure animal mating rituals. Hiatus Kaiyote’s sense of adventure and unpredictability has always been a feature and that shines on “Chivalry Is Not Dead”, as the track keeps the listener guessing at every turn.

“Get Sun” elicits a Destiny’s Child style ‘woooo’ early on, before Nai Palm croons in supported by jolty keys that both delight and cruise with waves of joy from the vocals.

There are odd-yet-fun rhythms on “Rosewater”, while “Red Room” is a bass and drum groove, which also feels like loungy chill music.

“Stone or Lavender” is a beautiful ballad the band came up with one night in Rio, where Nai Palm’s vast voice and the piano sparkles too.

All those aforementioned tracks are very different in their own right, yet there is a theme and cohesion that permeates Mood Valiant throughout, be it the backing strings, Nai Palm’s unique vocals and, at times, playful lyrics, the band’s distinct sound, as well as a tempo that flows harmoniously.

It would be remiss not to mention that Hiatus Kaiyote have been sampled by the likes of Drake, Kendrick Lamar and Jay-Z and Beyonce, which has only further fueled the categorization confusion.

But who needs to put them in a category or box, when they produce gems like this.

Mood Valiant is out Friday 25 June

Hiatus Kaiyote have announced an Australia/NZ tour as follows: – tickets can be purchased HERE (and check here for date changes)