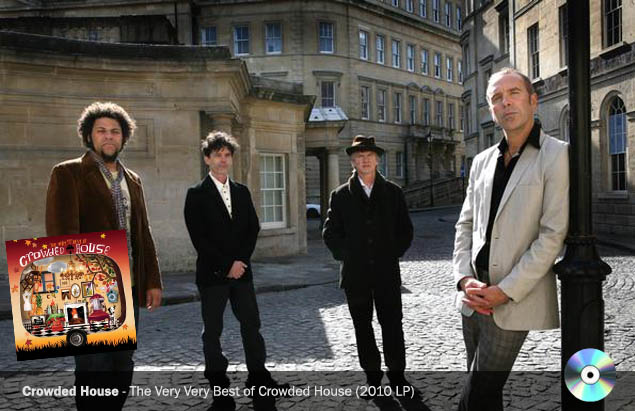 It has been over thirty years since Crowed House first formed and came into their own, after releasing the International hit “Don’t Dream Its Over”. When I listen to this song, it seems to encapsulate my idea of the 1980s so entirely. I am a child of the ’80s, and therefore grew up with Crowded House’s music playing on the radio throughout my childhood.

Decades on, and I still find the track being played regularly on commercial radio, in cafes, and over the speakers in shopping centers. It is easy to forget about the great lyricism and song-writing of a song that gets an inordinate amount of radio play, and becomes a piece of popular musical furniture. Crowded House songs, I have found, seem to somehow seep into your consciousness in this way. Neil Finn is an amazing songwriter, and this fact is never more evident than when listening to Crowded House’s new compilation, The Very Very Best Of Crowded House.

Greatest Hits albums are like scrapbooks; they serve as a collection of not just the favorite memories, but also as a kind of artwork in themselves. A good greatest hits will not only contain all the singles, but also those other gems that are scattered throughout the band’s back catalogue, and can paint a picture of the history of where a band comes from and what they evolved into over their career. This greatest hits album does just that.

The Very Very Best Of Crowded House is a superior compilation to their previous “best-of” Recurring Dream, which collected their best tracks up until 1996. There are no omissions, and many more additions to this new collection, with all the early favourites that you would expect, including “Now We’re Getting Somewhere”, “Four Seasons In One Day”, “Better Be Home Soon” and “Distant Sun” naturally included among the thirty-two tracks on the 2 CD set.

There is also a selection of later material, such as “Private Universe”, from 1999’s Afterglow, and “She Called Up”, from 2007’s Time on Earth. The realisation that this band has made such an amazing back catalogue of songs struck me as an phenomenal achievement, and it is clear why Crowded House are regarded as one of the greatest “Australian” bands of all time.

The band is touring in November this year, following up the release of their album of new material, Intriguer. The Very Very Best Of Crowded House is the definitive collection from a band that has been releasing new music every few years for the past four years, with an inspired back catalogue of hits that span 3 decades, and it is an album that belongs in everyone’s CD collection.