Vance Joy has been round the world over the last eight months, putting on an impressive 83 shows on the back of his most recent album, Nation Of Two. If you somehow missed this massive run of shows or are just suffering from post concert depression, he is now releasing a 16 track live record which documents his concert from Red Rocks Amphitheatre earlier this year.

Red Rocks, just outside Denver is undoubtedly natures most stunning concert location. Those who have been there or even seen footage of concerts at the amphitheatre will find magic in being able to imagine themselves in this huge crowd half way round the world. Filling out this iconic venue is a huge accomplishment for any artist and even better with a stack of adoring fans singing every word to brand new songs and songs from five years ago.

Vance Joy’s success has mostly come from his skill as an exceptional vocalist and lyricist. His tender and mild nature shines in the album, however it just seems like an album we really didn’t need. A great live album has the power to make you genuinely tense up in anger for missing that concert or forces you to sing lyrics out like you really are there. This album just seems to miss the mark on that. It highlights his unique and distinctive musicality but doesn’t have the strength to really take the listeners imagination back to a vivid concert experience.

Opening with “Call If You Need Me” sets the scene for a performance packed with tracks off A Nation Of Two, intwined with all the classics including Hottest 100 winning “Rip Tide” and timeless favourite “Georgia.” Most of the tracks he plays live are identical to the album version except for “Little Boy” and “Bonnie and Clyde” which were played as more stripped back, acoustic versions.  Reworking some of the other tracks could have been beneficial for the album as a stand alone collectors edition.

Don’t get me wrong, its still an easy and enjoyable listen. Seemingly calm and candid Vance Joy avoids the cheap banter and opts for meaningful explanations of the inspiration behind his tracks. Understanding the meaning behind a song should never be underestimated and can make listening to a song you’ve listened to a thousand times feel new and exciting. Most of his stories come from childhood stories or previous relationships and his sincerity and humble nature is endearing and loveable.

The whole album creates a sweet reminiscent atmosphere which peaks as he introduces ‘Rip Tide” as the first track he ever put on the internet and a track he never expected to play all over the world. The album shines in this song as the crowd choruses every word back to him in a surprisingly good choir like manor. The album follows with his biggest hit from A Nation Of Two, “Lay It On Me,” which is the perfect contrast to “Riptide.” It shows the more anthemic and vocally distinguished side of Vance Joy paired with the smooth folky melodies which he has carried through his whole career. Finally, it finishes with “Saturday Sun” also off his most recent album – A cool and vibrant love song, the ideal closing track and a good look at the future of Vance Joy.

Overall, the set is well constructed and Vance Joy’s amiable and delightful nature takes you through a lyrical look at love, lust and the messiness of relationships. Whether necessary or not, I’m sure fans will be delighted with what seems to me more like a “best of album”, featuring a charming look at his captivating voice and reliable band – not to mention a celebration of his incredible success in the USA. 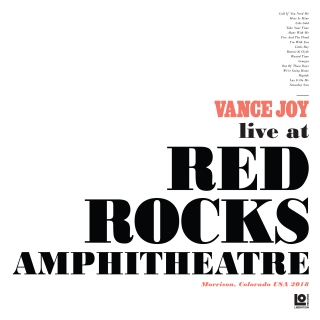 The album is set for release everywhere on 16th November, and for more information about Vance Joy visit his website HERE.

Vance Joy is playing a few festival shows this Summer, so you can be the judge of how good his live performance is.