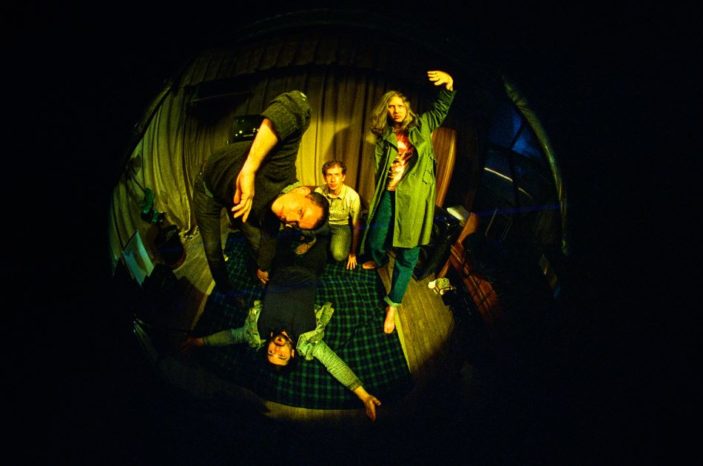 Parquet Courts has always been a band comfortable in their ability to produce songs with no (or limited) frills that always manage to get the job done. From initially breaking out with Light Up Gold in 2012, right through to 2018’s Wide Awake, the New York four piece’s brand of chaotic post-punk garage rock has never missed a beat in its ability to deliver tracks that essentially does what the label says. They’re a band with no hidden terms and conditions, and here on their seventh album Sympathy For Life, Parquet Courts once again deliver on what they’ve always promised, while changing it all up just enough to keep the listener on their toes when needed.

Heading into the recording process for Sympathy For Life, the band went in with the intent of trying to capture the vibe and sounds you’d expect on a night out with mates at the club, rather than a gig. Trying to attempt the sounds of a live DJ set, the band preceded the album’s recording process by engaging in long jam sessions, before ultimately snipping these jams down into song size morsels. And honestly, they’ve done pretty well for the most part to capture that live party vibe and jam session intricacies on Sympathy For Life.

The summer jam party tones are ultimately evident right from the beginning of lead single and opening track “Walking at a Downtown Pace”. The near five-minute rager captures those stereotypical summer sessions in the sun, with the recognisable guitar licks Parquet Courts have become known for playing the most crucial role in the song. The garage rock imprecision of the drums hold the song together while the vocals of Andrew Savage sprawl out in his traditional erratic tone and delivery. Following up “Walking at a Downtown Pace” with the deadly “Black Widow Spider”, the album commences with the exact level of escapism and imagery you’d expect from a band on their seventh album seeking the chance to bring a live party setting to life.

The band has noted that their previous album, Wide Awake, was designed to be played at a party, while Sympathy For Life is influenced by the times had at that same party. And honestly, you can pick up on this inspiration and theme straight away. While some of the songs are dance-ready ( it’s hard to deny the enthusiasm of “Sympathy For Life” and its slick bass and percussion, while “Zoom Out” carries on in a similar vibe), it’s the slower tracks that help bring the album full circle and provide it with shape and body. The introspective “Trullo” feels like the fly on the wall moments towards the end of a party where everyone is slightly cooked but still having a good time, while album closer “Pulcinella” is almost seven minutes of bliss allowing the band to bask in its own glory without being overly indulgent.

“Plant Life” is a downbeat groover that channels the math rock stylings of Battles, while the exploratory bass and uneasy nature of “Marathon of Anger” feels a little bit like the spaced-out experimental sounds you’d expect from a band like Talking Heads or King Gizzard. One of the more exciting and indeed different moments on Sympathy For Life comes in the form of “Application Apparatus”, a song that takes more than one listen to get into, but really kicks off in its closing half. Not afraid to be different and be openly inspired by an acid trip, “Application Apparatus” is one of the peaks on an album that is a little unevenly paced and not always congruent.

The complete pinnacle of Sympathy For Life is “Homo Sapien”, two and a half minutes of clinical Parquet Courts that would rival any of the best songs on their previous albums. Rapid, fierce and angry, “Homo Sapien” is everything Parquet Courts has built their band up to be over the past decade. Sympathy For Life isn’t the best album of Parquet Courts, but the eleven songs of the album allows the best of the band to shine through. Once again, they’ve managed to deliver on what they do best all the while keeping it fresh just enough to not go stale.

Sympathy For Life is out Friday 22 October. You can keep up to date with Parquet Courts on their Website