After 10 years at Mona Museum and surrounds in Hobart, this year marks the iconic arts festival Mona Foma’s controversial move to Launceston.

Now, just as they helped changed the artistic landscape in Hobart, they‘re hoping to do the same in Launceston, and today pulled out all the stops to ensure that the festival which prides itself on its unique artistic flair kicked off with a bang.

For those travelling from the mainland, this included turning a charter Qantas flight into the first ever “Air Mofo”, which took passengers on the brief 1 hour journey from Melbourne, accompanied by “Fully Sick Bags” and just about everything you could expect from a Mona run experience. Yes, Mona Foma is now officially in the skies of Australia.

The experience started at the Qantas Club in Melbourne where slews of competition winners (25 and their guests to be exact) wearing Air Mofo shirts (with a “censored” sticker playfully posted over the MOFO) were enjoying a breakfast cocktails and some canapés – croissants, dumplings, pork buns and more – a service not unlike the VIP experience you might enjoy on the ferry to the Mona Museum in Hobart.

Winners were treated to unique Q&As from some delightfully dressed stewardesses (think straight out of “Hedwig” – they later introduced themselves as captain Rochelle and Vinegar), which would later lead to their stories shared in flight.

On board, an entertaining insert reminded guests that it’s pronounced “lon-ceston” not “in-ceston” and to not pet fellow passengers as they might have STDs. And a fully sick bag was also at every seat on board the new Qantas 737-800, with sparkling wine and cokes distributed shortly after take off. This led to an operatic singalong from the “captains” ahead of Captain Rochelle sharing stories from the winners, which included a lot of talk about oysters. And then, naturally, a drag show from Space Creature (head to our Instagram Stories to see some of it in action).

Rain delayed the flight with a single runway in operation, and after about 45 minutes in the air, Air Mofo landed about an hour behind schedule.

Upon landing, we were supposed to greeted by the Premier of Tasmania at the Launceston Qantas Lounge, but he had to leave before we landed – so Deputy Mayor Danny Gibson and Mona Foma curator (and Violent Femmes member) Brian Ritchie filled in and welcomed everyone with a Rosé and a Launceston pin. And, of course, some freshly shucked oysters. 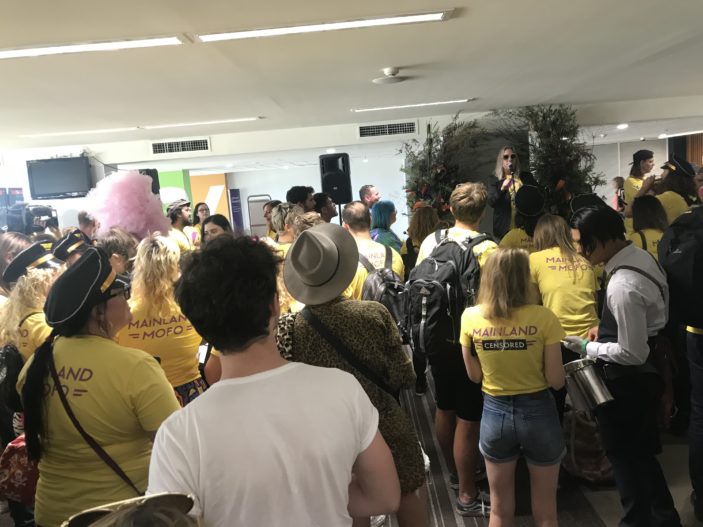 With the late arrival, the welcome was brief with Brian Ritchie commending the winners in attendance, ”We had over 3,000 people who didn’t win this competition… it was a game of skill, I read the people they chose and I said – These people are freaky! They have to come to Mona Foma!”

At the welcome, the deputy mayor remarked to the incoming Mona Foma guests, “I only have three rules: Have fun, spend money and visit the monkeys in city park. This amazing festival is something we’re so excited to be holding in Launceston, and showing off our home. Tell everyone that Mofo in Launceston is the place to be.”

And over the next few days we’ll certainly find out if that’s the case. But if the flair and fun of the flight down is any indicator, it seems the festival will only find new ways to excite and entice in its new home.

Stay tuned to the AU for all the action out of Launceston and Mona Foma. For more details about the event, head to mofo.net.au.