Over the Queen’s Birthday long weekend, approximately 4000 people from across the country gathered to take part in a camping festival, Barunga, held within the Barunga community, 80 kilometres South of Katherine, home of the Bagala people. For this weekend alone, outsiders are exempt from obtaining a permit and are welcomed for three days of drug, alcohol and smoke-free fun and left reliant on the palpable energy, positivity and excitement spurred on by an entire line-up of Indigenous musicians, as well as, sports, cultural events and workshops and films to occupy every minute of each day. Ticket prices were low, making the event as accessible as possible – a factor often overlooked or deemed impossible to deal with.

At first glance, the site seems small yet with every passing minute there is more to uncover and the entire community is transformed come the evening under the stars. With food, juices and coffee supplied by local Territory businesses it was hard not to feel at home. Part school carnival, part community fete, part music festival – the event attracted people from across the country and even overseas, while others came from remote Indigenous communities in order to dance, play basketball or AFL. The entire weekend was an opportunity to not only absorb culture, but get out of your comfort zone and meet as many likeminded people as possible. 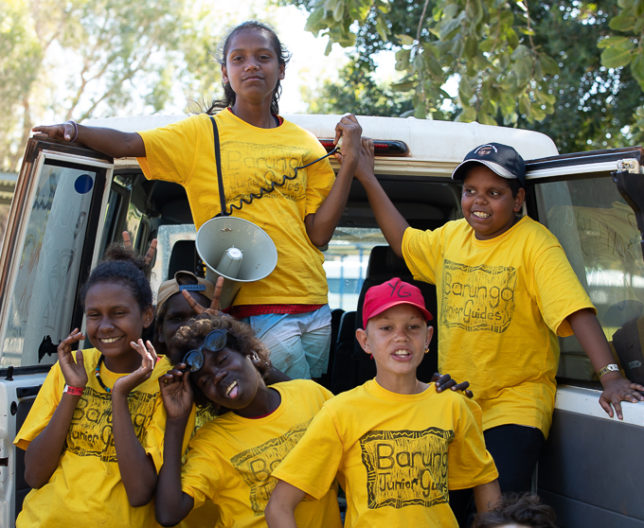 The first night saw a film festival at the main stage showcasing a bunch of emerging Territory filmmakers with a firm focus on community public service such as Don’t Make Smokes your Story and contemporary takes on stories from the Dreaming. Soon after there was a kid-run disco that attracted one of the biggest crowds all weekend just to watch local Indigenous children DJ and dance on the basketball courts for hours.

At the same time, an insider tip sent me to the APRA tent to see Suming Rupi, an indigenous Amis Taiwanese performer dressed in traditional formal Amis attire; a symbol of respect to the Bagala people for welcoming him. Suming sang in front of an initially unsure but overwhelmingly supportive audience of converted fans, encouraging sing-a-longs in Chinese saying that, “Your voices will go into the wind and to my ancestors”. This bond formed between Taiwan and Aboriginal Australia is a very welcome reminder that all of us non-Indigenous people are purely guests on this island and should continue to treat it with the same respect.

Day times were a slower pace, although no less engaging. The heat saw most escaping from the sun and napping under trees; while others explored wares on sale from a handful of art centres or attended craft workshops hosted by Indigenous women. Every moment was an opportunity to learn and forge new relationships. 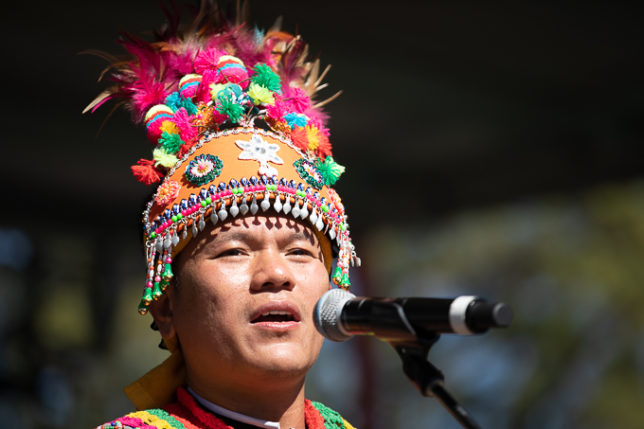 The weekend was politically charged as it marked the 30 year anniversary of a treaty signed by Bob Hawke at Barunga Festival which was never brought before Parliament. Now, more than ever, the socially conscious formed a powerful undercurrent of impatience and tension most noticeable as Yirrmal performed a cover of ‘Treaty’ by Yothu Yindi, a memory which undoubtedly remains at the forefront of the minds of all present urging Australia on to the right side of history.

Despite there being only two stages, it was impossible to keep up with the frenetic energy of the weekend. The closing set from Tjupi Band had the most engaging moment in an already fantastic set when they invited the general audience to get on stage – causing a brief yet joyous whirlwind of activity as punters relished their 15 seconds of fame before dashing back into anonymity. A symbolic end to an exhausting and educational weekend that well and truly brought everyone present on to a level playing field of respect and understanding; exactly how it should be.

The writer attended this event over the June 8th – 10th weekend. Photos by Bruce Baker