Although it’s been available for roughly two years now, Withings’ Steel HR Sport should see some renewed interest now that the company has a new flagship to fawn over, the recently released – and impressively specc’d – ScanWatch. We’re hoping to go hands-on with one of those before Christmas rolls around, but for now we want to re-visit the Steel HR Sport given its price tag will no doubt be slashed in the upcoming Christmas sale run that’s often seen as the best time to load up on tech.

We’ve already looked at the Steel HR, which is an even older model in the series, and noted that although the design is exceptional, it suffers from inconsistency and a narrow tracking range which is limited to basic exercises. Theoretically, the Steel HR Sport was made to solve some of those issues, with one of its primary distinctions being that it allows for much more nuance when it comes to activities, tracking much more than just your basic jogging, swimming and walking.

Does it solve the other issues too? Is it a perfectly serviceable hybrid smartwatch in 2020? Or should you save a bit more and go for the flashy new ScanWatch? 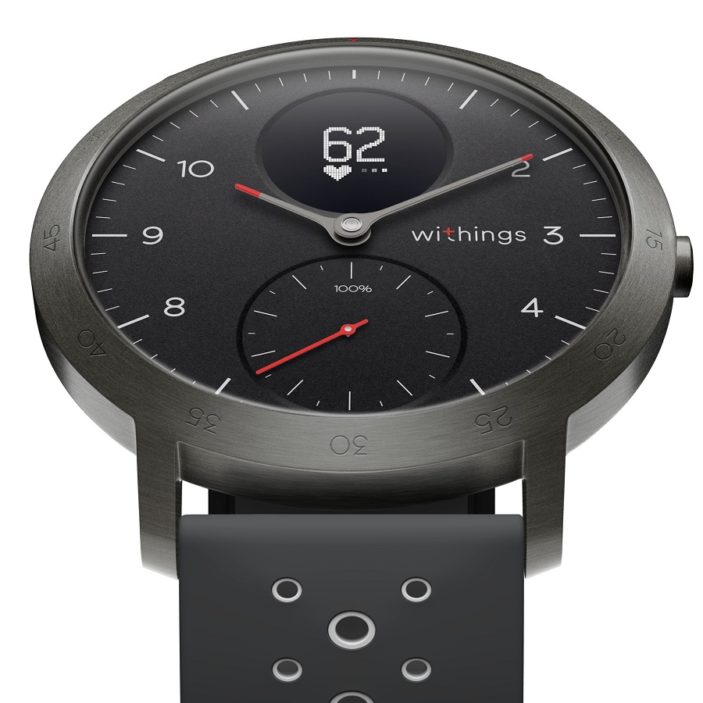 The Steel HR Sport separates itself from the Steel HR with, appropriately, a slightly more energetic and rugged look. You’ve got the same slick analogue design that has made Withings one of the favourites in the wearable race, but it sports a more matte finish as opposed to its older sibling’s elegant, glossy look. It’s slim, 40mm case is made of stainless steel with a black bezel running around the curved edges. Though it weight 10g more than the Steel HR – bringing it to 49g – its light enough to feel like it’s barely there on your arm, and there were numerous times throughout my month-long test with it where I forgot I ever had it on – a good sign for any high-tech wearable.

And like the Steel HR, you’ve only got one button giving a slight protrusion on the right side of the watch. All the functionality is stuffed into this one button, which while helping with a clean aesthetic, makes the UI feel clunky and easily confused as you’re trying to master all number of presses, short and long, to access features on the fly. When you’re on the move this is more annoying, especially if you don’t want to pull out your phone and use the companion app to play around with some functionality.

You’ve got a 5atm rating here, which means you can take the watch as deep as 40m underwater, eliminating any worry when it comes to using this thing outside and putting it through a substantial amount of pain while you’re at it. Sweat all over the watch; it’ll shrug off those beads like its nobody’s business.

A soft silicone band feels much more breathable and comfortable to wear than the typical leather that wraps around your wrist when you’re wearing the Steel HR. This makes it much more appropriate for longer sessions, by design playing into its function as a fitness tracker meant to go the distance.

Some of the downsides of the Steel HR unfortunately carry over here, like no NFC. Granted, the Sport isn’t so much more committed to being smarter than it is just offering a more consistent fitness tracker. This is only a hybrid after all, not a fully-fledged smartwatch.

The beautiful OLED display is nice and easy on the eyes, even more so than the predecessor as it offers a nice, bright face to clearly get across information when you’re outdoors. There’s a small dial towards the bottom of the watch face so your current step count is readable at all times, converted to a useful percentage of your set daily goal.

There are two major selling points for the HR Sport that place it above and well beyond the regular HR. The first is that, unlike the other model, the Sport has enough flexibility to not only track the usual suspects like running, walking and swimming, but also a wide range of activities like volleyball and yoga. It is a fitness tracker after all, and though newer competitors in the space for 2020 are releasing ones with an even wider scope, the Sport gives most consumers just about everything they would need as far as supporting activities go.

The other big bump is the use of a VO2 max reading, which considers your maximal oxygen consumption during a fitness session, using the connected GPS (which means you’d need your smartphone with you for it to work accurately) to give you a score based on how much oxygen is being transferred to the blood. It’s a handy reading, which is estimated from a variety of states, letting you easily track improvements in stamina.

That being said, V02 is a fairly complex metric, and I would only consider the readings to be approximations rather than completely accurate. That is, after all, the biggest challenge with fitness trackers and why each year we see new ones burst onto the scene touting new and improved trackers. That’s because none of this is 100% accurate, and likely will never be, but at least it’s a good approximation, which is pretty much all you need to establish a baseline and track hence forth.

Other readings like from the heart rate monitor and step and calorie counting seemed to be much more consistent than the same on the Steel HR. Sleep tracking seems to have undergone a huge improvement too, given I had no issue with the tracker stopping halfway through the night. Again, in 2020, there are newer watches with much more nuanced ways to analysing your sleep data, but the Steel HR Sport still does a fine job and could have been considered the best on market when it was first released.

Battery is where the Steel HR Sport exceeds, and remains one of the most impressively juiced wearables at this price point. Withings aren’t lying when they say you’ll get an easy 25 days from a single charge. I’d even stretch that closer to a full month if there are days on which you’re not pushing the watch as hard. Given it charges completely in two hours – with a proprietary charger – the Steel HR Sport is a clear winner when it comes to battery.

The Steel HR Sport is a significant improvement over the Steel HR, and remains one of the most important devices in the company’s portfolio. And this isn’t only because of performance; it was the first product Withings released when it was bought back from Nokia, adding a touch of romance to it all, but also showing you what kind of standard this was held to. It was literally the device that’d re-introduce the world to a reinvigorated and re-focused Withings, and I don’t think they disappointed given the watch still holds up well, despite the staggering amount of hybrid fitness trackers on the market now.

That being said, you’re currently looking at A$339 for the Steel HR Sport (based on JB Hi Fi pricing). The ScanWatch is around A$479, although not yet widely available in Australia. The Sport would start to look much more attractive if the price was slashed a bit further (which no doubt it will be once the ScanWatch hits), but for the price difference that stands, I’d just save a bit more and go for the ScanWatch, which has many more features and so far has been getting excellent reviews.

Although if you’re on a tight budget, the Sport really isn’t a bad compromise. In fact, it’s still one of the best you can make if you’re looking for a fitness tracker that also looks like a classic wristwatch.

Highlights: Much more consistent and reliable than the Steel HR; wider range of activity tracking and options; stylish look; incredible battery life; VO2 reading is valuable when looking for improvements in fitness.
Lowlights: clunky UI thanks to just one button; no NFI; still not as accurate in 2020 as some competitors; no built-in GPS.
Manufacturer: Withings
Price: A$339
Available: Now