The Yakuza Remastered Collection is a watershed moment for Japan’s favourite video game crime drama. 15 years ago, you might never have heard of the Yakuza series. Today, it is beloved. The series has enjoyed a recent resurgence — a prequel in Yakuza Zero, remakes in Yakuza Kiwami and Yakuza Kiwami 2, a new game in Yakuza 6 and a spin-off in the acclaimed Judgment.

With all these titles so readily available, Yakuza is making a strong name for itself in the western market. To whit, The Yakuza Remastered Collection brings Yakuza 3, 4 and 5 to the PS4. With this release, the entire Yakuza series is available on the current generation of consoles.

This collection is a remaster. It adds a layer of polish and smoothness to the games as they were. It is not a ground-up remake like Yakuza Kiwami. That said, these games stand strong as worthy additions to the franchise, even in the modern era.

Let Me Tell You a Story

The Yakuza Remastered Collection bundles three of the franchise’s most varied stories into a single package.  While it seems odd to lump these middle chapters of a larger narrative together, it makes sense in hindsight. These complex, messy games that involve multiple characters and interweaving plotlines. Thus, it’s no surprise when we meet our protagonist Kazuma Kiryu in Yakuza 3, he’s been through some stuff. Kiryu is once again attempting to leave his life of crime behind. His plan for turning over a new leaf is to move to Okinawa and manage an orphanage. He lasts about a week before being pulled back into the fray. I found this story to be the most personal, simply based on the connection Kiryu has to both the orphans and the orphanage itself. His struggle to hold onto a life he may never truly be able to have is affecting.

Yakuza 4 sees Kiryu tag along with three new playable characters. Successful entrepreneur Shun Akiyama is on a mission to find whoever stole ¥100,000,000,000 from him. That’s one hundred billion yen, or around $1. 35b AUD. It’s not walking-around money, and every crime family in the city is a suspect. Yakuza 4 creates a tense atmosphere and great sense of mystery as our characters work towards their common goal. I ultimately found it lacked the heart of Yakuza 3, failing to hit those emotional highs in favour of a more traditional story.

Finally, Yakuza 5 sees Kiryu in hiding, disguised and working as a taxi driver, his latest bid to lead a regular life. After introducing you to driving, one of the game’s main mechanics, Yakuza 5 treats you to one of the best narrative experiences in the series, bringing back all of its iconic characters, and introducing five playable characters. The interwoven storylines all focus on the characters first, fleshing out their motivations over quirks and memorable lines. A reluctant Kiryu finds himself at the centre of a new gang war tearing the Kamurocho district apart. At the heart of the conflict is fan-favourite Haruka Sawamura, hell-bent on avenging the death of her family at the hands of a rival family.

Each of these games tell a vastly different story, and while they’re admittedly deep and confusing at times, each pack in enough memorable moments as they build toward much larger endgames. 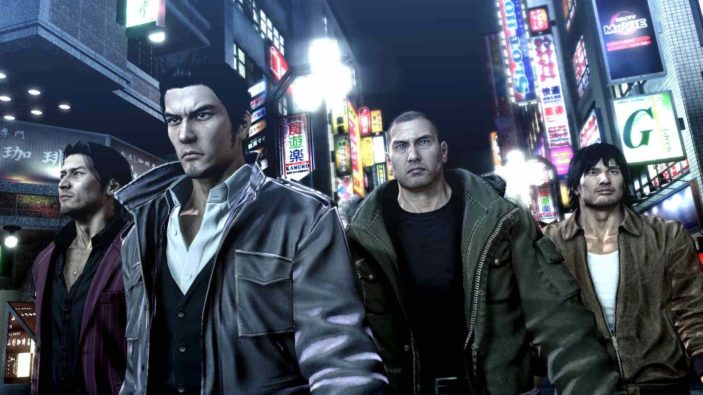 Seek and You Shall Find

In terms of gameplay, all three Yakuza titles play out pretty similarly. Players roam the city for most missions and side activities, until you eventually get into a fight. The series has always split these two core gameplay mechanics into two distinct experiences. The idea behind this is to allow exploration without the unnecessary disruption of combat. It sounds strange putting it like that, but when there’s this much to explore, you’ll be thankful. While Yakuza 3 and 5 include main portions of the narrative that take place outside of Kamurocho, the series’ familiar central Tokyo district, they always find their way back.

Yakuza 3 is set among the open towns and beaches of Okinawa, a welcome change from the dense streets of Kamurocho. Apart from a change of scenery, most of the core loop remains the same — go here, find this, get into a fight. The seachange is nice, but Kamurocho still felt like it had more in terms of variety and visuals, the bustling streets highlighting the major improvements to both visuals and performance.

Yakuza 4 returns primarily to Kamurocho and is content with a more traditional approach. Yakuza 5, on the other hand, stands apart as the largest entry in the series. It takes Kiryu on a tour of Kamurocho, Osaka, Fukuoka, Nagoya, and Sapporo. These towns are separated into smaller biomes in contrast to the open, single city of Kamurocho, but are arguably just as dense. Driving in Yakuza 5 also greatly helps exploration, and proves to be an addictive mechanic of its own. It’s certainly not a racer, but the driving feels responsive enough to make you feel like a star. This is appropriate given the series dedication to being an over-the-top power fantasy.

It’s hard to waste your time in a Yakuza game. Exploring each town, city and precinct yields a mixture of quirky mini-games — arcades, Karaoke, darts, golf, bowling, fishing, poker and so much more. You can get totally lost in the incredible density of each city, and none of it gets old. Each mini-game is funny and addictive, and the result is a city that feels authentically lived-in. Though the minimap doesn’t necessarily highlight each activity, like a real city if you seek, you will most definitely find. That’s just part of the charm. 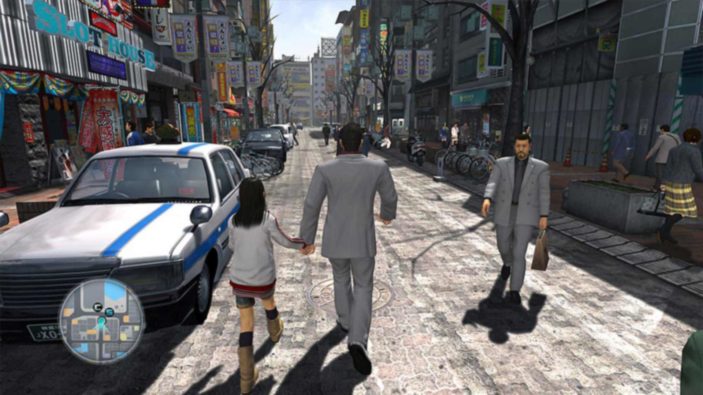 The other half of any Yakuza game is combat. Despite their age, the combat in each of these Yakuza games is incredibly strong, with each iteration improving on the flaws of the last. Yakuza 3 sets a strong foundation for combat with a wide variety of moves, combos, and abilities. The ability to land light and heavy strikes is fluid and responsive, while the freedom to wield environmental items as weapons adds depth to each encounter. Kiryu can also build up his ‘heat’ bar, which grows as you lands various strikes, culminating in a devastating finishing blow.

Yakuza 4 and 5 broaden the look and feel of combat, but are closely linked in tone and approach. From Kiryu’s well-rounded fighting style to Akiyama’s reliance on fast and deadly kicks, combat incentivises experimentation without altering the three-button control scheme. Moves and abilities are upgradable throughout each game, allowing you to master each aspect of combat. This keeps combat from being repetitive, allowing the difficulty curve to gradually rise; accessible enough to learn, but incredibly hard to master. 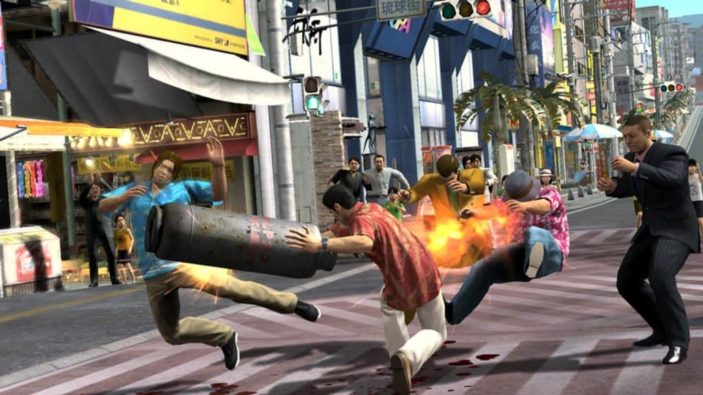 As the title says, the Yakuza Remastered Collection is strictly a remaster, not a ground-up remake like 2017’s Yakuza Kiwami. Each entry in this collection has been given the HD upscale treatment, all while playing out in a buttery smooth 60FPS. More than anything, The Yakuza Remastered Collection adds a layer of polish. Some textures suffer from either a lack of detail or muddy colours, but on the whole, everything looks much sharper. The main draw are the facial features, which now stand out, adding greater emotion to every performance.

While the franchise does show its age in some areas, it’s still extremely relevant. Conversations outside of cutscenes in both Yakuza 3 and 4 are given only in text, and characters move their mouths in silence. Yakuza 5 rectifies this issue thankfully, but it’s all the more jarring in today’s fully voiced era. However, all side missions are now accessible from the beginning, rather than having the player find them throughout the narrative. I thought this was a neat change as it’s much easier to track each mission down, especially for all those trophy hunters out there. 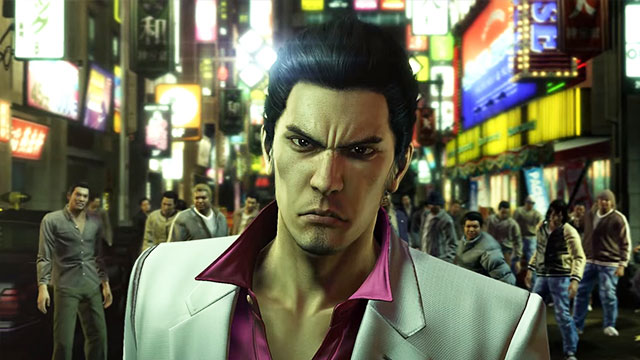 The Yakuza Remastered Collection may show its age in certain parts, but it never detracted from my overall enjoyment of each title. What initially seemed to be a strange choice, culminated in three of the most varied, important and entertaining games in the entire series, while making their debut on the current generation of consoles. Combat and exploration are both fun and addictive, while an added layer of polish keeps things looking fresh and vibrant. The stories are admittedly long and complex at times, but if you’re ready and willing, The Yakuza Remastered Collection will keep you going for hours on end.