We’re not spoiled for choice with gaming merch in Australia

I’ve been looking everywhere for what might be good gaming merchandise. I’ve trawled through official sites, brick-and-mortar stores and even outlets like Red Bubble.

I have to admit, there’s not a whole lot of variety across all three of these, and what’s there is usually not that good, covered in brands or weird quotes or images, especially among t-shirts.

It’s weird — gaming has come a long way, breaking itself apart from a basement-dwelling stigma; Geoff Keighly’s The Game Awards is one of the most watched annual award ceremonies, ads for games and consoles decorate city buses and streets — there’s no longer a place for a discussion on gaming entering the mainstream “soon” when it already has, and yet I still can’t get good games merch locally.

I’m thinking of it in contrast to merch coupled to music – band merch is the best; going along to a concert and picking up a shirt afterwards is a great way of showing your love for music.

Movies and TV shows have it similar — posters, and sometimes shirts, are available in the masses. I can get a mug with my favourite fictional TV company’s logo on it. What immediately comes to mind is the massive amounts of Star Wars t-shirts you can get these days from places like K-Mart.

It doesn’t seem like a a lot of online or physical retailers have given much of an eye to gaming merch, unless it has to do with 8-bit era throwbacks aimed at older Millennial audiences. Mario and Nintendo merch immediately comes to mind, which there is no shortage of.

Going into places that sell posters, the racks are usually littered with stuff scratching games at the surface — stuff homing in on the “Don’t mess with me, I’m a Gamer!” thread of the niche. Where these posters are, there’s usually not a lot of variety when contrasted against racks with music and visual-content related posters.

The gaming trend is obviously popular enough to justify an increase in variety for merch, but we don’t see it often. We are seeing merch through the same veins as the scenes media counterparts – through shirts and posters, but gaming also takes on a lot of fandom-related merch content.

This takes the form of costumes, typically for halloween and parties of the such, and statues, to which tremendous variety has been made through business like Sideshow Toy’s and Koto inc., which both offer toys and statues in the thread of comics, anime’s and fandom-heavy movies like within the Marvel Cinematic Universe.

All this said, Zing, a subsidiary of EB Games for fandom-centric items, did open a few years back, which is dedicated to nerdy merch, so perhaps I’ll eat my words, but even Zing’s merch is kind of on the off-side, again scratching the surface of the “Gamers are epic” memelord market.

I think a lot of the time pre-order incentives make up the best of the merch in the niche.

My Connor statue from a special edition of Assassins Creed 3 is such a cool collectible, perched on a shelf in my room. With Assassins Creed, Ubisoft set out to create a range of statues for the different assassins.

Bethesda loves to celebrate their games with grandiose merch as well — the recent Power Armour Helmet that accompanied Fallout 76, and the previous Pip-Boy in the Fallout 4 kit are great examples of this.

But these are expensive examples — it’s easy to get into the hundreds of dollars when talking about these, although they are quite nice. And besides, if we think about it in terms of merch to do with music and tv shows, it’s far more extra than a tshirt or a poster.

Blizzard has a nice line of Overwatch merch, with shirts catered to individual heroes. My gripe with these shirts is that on the back nearing the neck seam, there’s a big fat “Overwatch” logo that irks me. Other gear stores suffer from similar issues.

That being said, Blizzard tshirts appear to be really cheap, so if that’s up your alley go nuts.

One of my biggest reservations with any type of merch is that it needs to hold close an aspect of nuance – merch that screams in your face “STAR WARS” or “MINECRAFT” or “OVERWATCH” is immediately not something I think that greatly of. That said, maybe I give bands a free pass for putting their band names on tshirts because of being in the moment of a concert. Shirts like these you can totally pick up from Zing and EB Games. I’m totally in preference of a cool illustration of Reinhardt or Moira on a shirt.

Perhaps that makes it a case by case situation — I definitely know what I like, and I’d bet a lot of other fans of the niche would subscribe to similar thought.

I really want to end this article on a high note.

I got this online a few days ago — I think it’s a good example of what I’m talking about with gaming merch. It’s go nuance as to what it’s from, but it still remains a functional thing to have in public, and it isn’t all up in your face screaming “Video Games”. No brand name, it’s colourful and nice. For anyone interested, it’s a spray from Overwatch, of Bastion’s bird Ganymede. 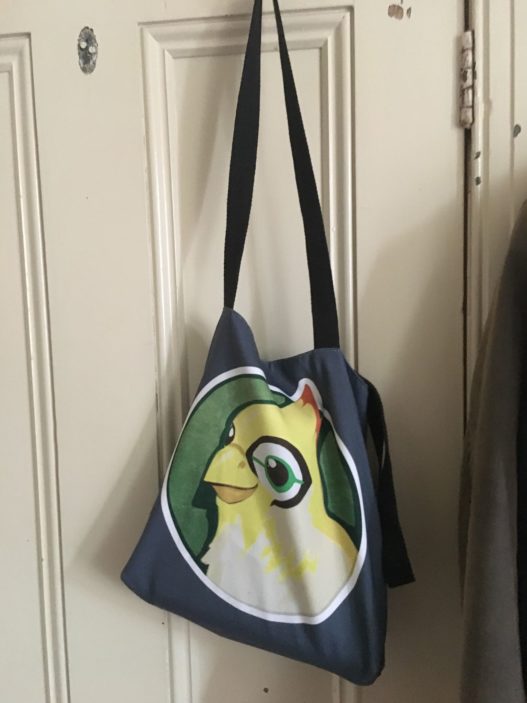 If you’ve got anyone way into gaming in desperate need of a Christmas present, consider what I’ve littered through this article.