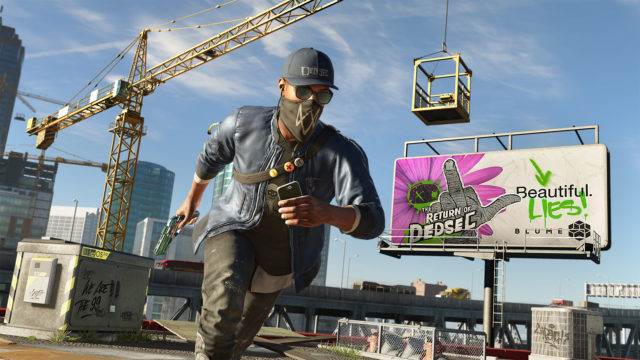 To say that I was not a fan of Watch Dogs would be a bit of an understatement. Despite its fantastic concept and an E3 showing that blew the doors off the show in 2013, the finished game was a dreary, by-the-numbers open world shooter that sold quite well but ultimately failed to engage. Ubisoft have come back strong from a first-game stumble before, however, and they’re putting that experience to work with Watch Dogs 2.

Set in a near-future version of San Francisco, Watch Dogs 2 ditches the first game’s boring protagonist Aiden Pearce in favour of Marcus Holloway, a young black computer hacker from Oakland who is arrested for a crime he didn’t commit due to the new ctOS 2.0 operating system profiling him as a potential suspect. Upon being freed, Marcus begins to realise just how damaging the omnipresent network is to every day people and turns his prodigious hacking abilities towards dismantling it. These talents get him noticed by the infamous Dedsec hacker collective and he is quickly welcomed into their scrappy, underdog ranks.

Right away Watch Dogs 2 distances itself from its predecessor by presenting a vibrant world. A stark contrast to the dreariness of Chicago in the first game, San Francisco is almost aggressively Californian — sunny, colourful, filled with art, happy weirdos and, perhaps most importantly, cashed up tech giants.

The game then continues its tonal overhaul by introducing a cast of characters that are equally as colourful, from Marcus’ friends (who include a guy that wears a robot mask 100% of the time and one who seems to suffer from Asperger’s, the poor thing) to the garden variety San Franciscan misfits and outcasts you run into on each mission. It couldn’t be more clear that Ubisoft wants to put the vodka flavour of the original game out of everyone’s minds from the jump and make exploring their open world fun again.

Where Watch Dogs 2 shines brightest is where its mission design and upgrade trees intersect. One of my most significant complaints about the original game was that while Aiden was painted as a kind of Robin Hood for the digital age, hacking from the rich and uploading to the poor, very few of his problems could be solved without resorting to shooting everyone in the face. It took the game’s most interesting hook — the hacking — and kind of forced it into the back seat.

Watch Dogs 2 opens up an array of new and expanded tricks for Marcus to play around with, all right there on his phone. You can now erroneously call the cops on somebody, force smart cars to start moving of their own accord to create distractions or pin people to walls, surveil entire buildings with a drone or mess with a far greater degree of the city infrastructure in order to make an escape from the cops. Another new addition is the Nethack, which is a kind of full-spectrum camera mode not unlike Assassin’s Creed‘s Eagle Vision, that allows Marcus to see where anything hackable is located in the surrounding environment. This is a neat improvement because it means moving from security-camera-to-security-camera is no longer a huge problem in and of itself. Where Ubi are to be commended is that they’ve found a way to balance Nethack by placing security cameras in truly dastardly fashion to keep the thing you’re trying to see just out of view. It’s great, and it makes you turn every building over like a Rubik’s Cube, trying to get the angle.

The overall design takes all of these things into account, frequently providing multiple ways to tackle a given mission. The game labels each upgrade according to their use in your playstyle, starting with “Aggressor,” which is the Aiden Pearce shoot-the-problem-until-it-goes-away strategy, “Trickster,” which revolves around finding somewhere secluded for Marcus to hide and then using your hacking abilities to sew utter mayhem remotely and “Ghost,” which allows Marcus to personally infiltrate various, heavily-guarded facilities, shut down security, boost the data he needs and get out without anyone knowing he was there.

These last two are of particular interest to me because, in a game that lets you hack the world around oneself, who could bring themselves to give a shit about gunplay? In the 20 hours I’ve put into Watch Dogs 2 so far, I haven’t actually fired a single bullet (not even during the tutorial when the game was showing me how to do exactly that). Instead, I’ve been using my head to figure out smarter, often non-lethal solutions to every problem the game throws at me. Nice, Ubisoft. I heartily approve (If I do get caught? Hit ’em with my yo-yo thing and run for it. Not enough games let me do that, I’m here to tell you).

All of the aforementioned player agency is marred (at least right now) by a few questionable design choices, however. This is the part of the review where our Provisional qualifier comes into play. For a considerable portion of our review window, the seamless multiplayer side of Watch Dogs 2 was turned off while Ubisoft addressed a performance issue it was causing. Thus, we weren’t able to fully test the multiplayer but we can at least give you an overview of what we did get to try before it went offline pre-launch.

The drop-in online multiplayer hacker events return from the original game and are (at least in this reviewer’s opinion) more irritating than ever. They will pop up at random and interrupt everything you’re doing in order to send you across the map to find another player hiding in a bin stealing your data before allowing you to return to your mission-in-progress. Here’s the thing: you can’t cancel these events once they begin and as far as I can tell there’s no real consequence for simply standing around and waiting for them to end. I don’t know why Ubisoft thinks these games of find-the-troll hide-and-seek are fun because that’s certainly not been my experience, and I turned them off in the options as soon as I realised I could. Your mileage, of course, may vary dependent upon on what your tolerance level for dealing with buttheads online is like.

Elsewhere in multiplayer, there are co-operative online missions, and these are a lot of fun and well worth your time. They frequently involve a two-pronged assault on a particularly well-fortified building. Figuring out how best to tackle each situation, who should distract and when, and agreeing on the fastest possible bail route should anything go wrong recalled some excellent times spent playing co-op Splinter Cell: Pandora Tomorrow. It’s great stuff and these missions show how strongly the DNA of The Division permeates (and will continue to permeate) Ubi’s current games lineup. Looking forward to getting into more of these once the game is in wide release.

Along with the main storyline, there are plenty of side quests to keep you moving, and some of them are very enjoyable (a mission involving the creative takedown of a group of bent cops registered as undercover in ctOS, protecting their identities even as they run a high profile drug ring is a standout) while others feel like the same shit we’ve been doing since Grand Theft Auto 3 (break into dockside facility, steal the truck, drive the truck back to HQ, do not damage the truck). It’s hard to fault Ubi for these less interesting side missions — open world games like this have to be filled with a crazy amount of content and they can’t all be winners. Every mission nets you social media followers that, as they accrue, allow you access to further upgrades and hacks. This makes the side quests valuable, even in those missions where you don’t find what you’re doing particularly compelling (I’m looking at you, Drive Around Spray Painting Stuff quest).

Visually, Watch Dogs 2 is a feast for the eyes, particularly for those who will get to run it in 4K HDR. It’s locked at 30fps on consoles, but this isn’t too big of a deal considering how damned sharp everything is, even in 1080p. Skin, clothing, paint on vehicles, the way the sun gleams off the San Francisco skyscrapers as you hurtle over the Golden Gate in a boosted car that’s definitely not a Tesla. It’s gorgeous.

Everywhere you look there are nods to the real-world San Francisco in the art design, from its famous, openly gay neighbourhoods replete with rainbow-painted pedestrian crossings, to the hipstery-est of hipster fashion (I still can’t bring myself to purchase purple skinny jeans, even in a digital world). The bay gleams in the morning light, the city’s iconic neo-Victorian architecture and many landmarks, like the winding Lombard Street, are perfectly realised.

I mentioned earlier in this review that Ubi pulled the online multiplayer component to improve performance, and I want to touch on that again. If there was a wrinkle in terms of visuals and performance, it was this: I reviewed Watch Dogs 2 on our new PlayStation 4 Pro and was surprised to find that the game occasionally suffered from choppy frame rates and poor performance in the first couple of days I played it. This was a worry, especially considering the power of this new machine. In an email to reviewers, Ubisoft quickly identified the problem as having to do with their Seamless Multiplayer and, as mentioned previously, switched that portion of the game off server-side to work on it ahead of launch. The moment the multiplayer component was taken offline, performance improved dramatically.

At the time of this writing, though no new patch has been released, I have started to see the multiplayer component coming back online in dribs and drabs. I saw the performance suffer only once or twice during this period, a marked improvement over what it was like on Friday so it seems like they’ve almost got a lid on this thing. It’s possible that by the time you play the game, Ubi will have addressed the issue in its entirety and you’ll never have to deal with it. I feel it’s worth mentioning anyway: if it persists, the problem will require further patching by Ubi and you should be aware of that. If it’s fixed then its a great example of how committed Ubi are to never having another Assassin’s Creed Unity situation on their hands as long as they live.

While it doesn’t quite measure up to the lofty example set by Assassin’s Creed 2, the bible on how to make a video game sequel that improves on the original by orders of magnitude, Watch Dogs 2 nevertheless swings for the fences. Care has been taken to address the faults of the original, bringing new and creative ideas, flavours and perspectives to the table. It not only saves the franchise, but gives it a sound reason to continue. It blesses us with an interesting and empathetic lead in Marcus in a time when video games are in dire need of leading people-of-colour. Most importantly, though it has the same ironic sense of self-importance as its cast of characters, Watch Dogs 2 has something to say — about big data, about the video game industry, and about the way minorities are being treated in a tech and dot com sector that is strangely comfortable with zero accountability.

I hope that wherever Ubi takes this series next, they take the same go-big-or-go-home approach because it’s working.