Video Games Review: Just Cause 3 is clumsy, but likable

Just Cause 3 is a game with a clear mandate: roam around a massive open world and blow shit up in whatever manner pleases you most. In this regard, it acquits itself with ease and is a lot of fun. The trouble is, almost all of the game’s other moving parts are handled in a way that feels a little clumsy.

Following the events of Just Cause 2, Rico Rodriguez has cut ties with The Agency and has headed home to Medici, a beautiful island nation located somewhere in the Mediterranean. Medici is ruled by a violent dictator named General Di Ravello. Rico decides this guy gotta die and starts blowing up everything the General owns bit by bit.

In terms of plot (and in spite of the eight or nine writers I saw in the opening credits), the game keeps things as simple as the synopsis above, choosing to keep any cutscenes short and to the point. “We need help, go here, explode this/protect that, enjoy your day” make up the bulk of the objectives. None of the characters have any real depth and often only there to move you onto the next mission or idyllic island location requiring detonation. This is one of those occasions where I think paper-thin character development actually works in the game’s favour – the game is about explosions, anything that gets in the way of your creating them isn’t worth the trouble (a fact that makes a number of Just Cause 3’s other design choices even stranger, but we’ll get to those in a minute). 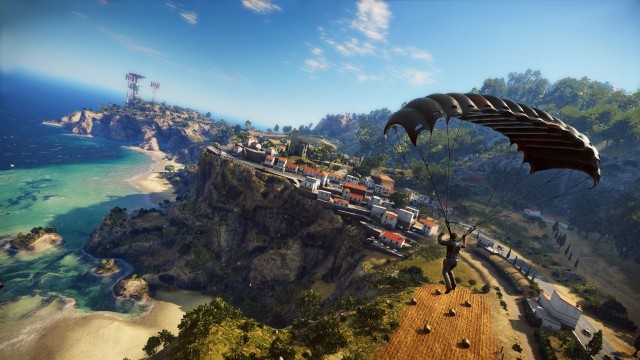 The game gets you moving immediately by giving you Rico’s now-obligatory grappling hook, allowing you zip around with speed, a deployable parachute and a wingsuit right off the bat. This allows you to change up how you traverse the game’s staggeringly large world map in ways that don’t force you to rely on driving vehicles with sluggish steering. It’s a big step in the right direction and, once you scale the learning curve, it’s a fun way to get around.

The trouble I had with using the grappling hook was that, on the PS4 version I was provided for this review at least, it’s surprisingly hard to aim. The same goes for any weapons in Rico’s arsenal. There’s no precise targeting or iron sights and though the game does provide a certain amount of auto aim to help you, I often found myself unloading on a guard or firing my grappling hook at a target only to miss by an unbelievable margin.

The spacious world map is made up of lots of single areas broken up into provinces. Each province contains a certain number of towns and military bases to liberate/explode and leave in shambles for the locals to clean up, and each one you destroy weakens Di Ravello’s hold on Medici (and is usually followed by an amusing radio broadcast by Doctor Who’s David Tennant, a captive of the Di Ravello regime). Doing so unlocks vehicles and weapons for use in the Rebel Drop menu. Here you can trade a beacon for a requisition of fresh weapons and a ride if you so desire. It’s a nice mechanic and it works well, but my problem with its unlock path is that it feels like the wrong one. 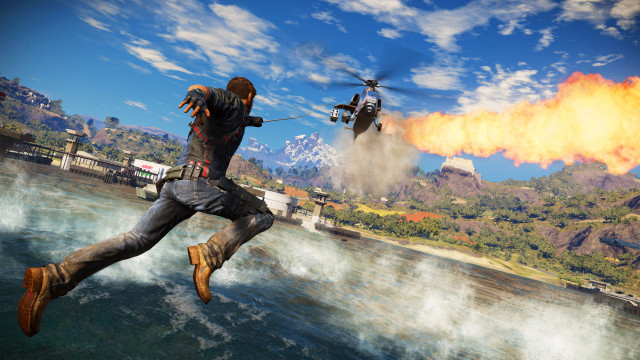 Why? Because Rico can also be upgraded to cause further chaos by applying Gear Mods. Gear Mods are a kind of currency unlocked by completing challenges strewn about the world map. Once you jump into a challenge, depending on how well you perform, you can obtain up to five gears. Each challenge nets you gears specific to the challenge’s central conceit, be it driving, combat or wingsuit gliding. Unlock enough gears and you’ll be able to equip a new skill. The more gears in a particular discipline you have, the more perks you can switch on at once. This all seems fine on paper but in practice it drove me crazy. It felt like having to pull a basic upgrade tree out of a skill tester.

I actually felt like Avalanche had gotten the unlocks and the upgrades around the wrong way. Give me the cars and the guns for completing challenges. Give me skills as part of a simple XP tree or as a completion reward. It sounds like I’m bitching about having to sing for my supper but it’s possible to be terrible at some of the skill challenges and never accrue enough gears to unlock any of the really fun stuff. When I only need two gears to pick up a skill but I suck at the wingsuit, it’s incredibly frustrating. I understand the idea behind dangling cool shit just out my reach, you want me to want the upgrades. The problem is that the way this has been implemented is the opposite of fun and made me want to do anything but chase Gear Mods.

The other major problem with this score-chase mode of ability unlocks is that, if you fail or want to run it again, you have to sit and wait for the game to completely reload. Some challenges took twenty seconds to reset. I had one wingsuit challenge that took a full three minutes to get me back in the game. While the gameworld (thankfully) requires no loading as you zip around it, when it comes to jumping through the game’s many extra-curricular hoops, the loading screen becomes a source of aggravation. 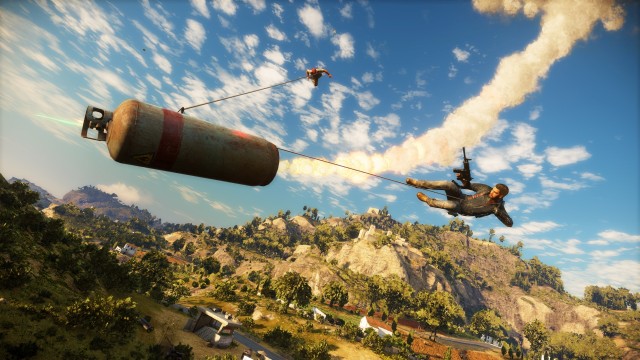 I’ve focused on these bizarre and infuriating quirks because when Just Cause 3 gets it right, it is an honest-to-god joy to play. Nailing a grapple on an explosive barrel and whipping it into a group of guards who packed in too tightly, setting off a chain of explosives that level half a base is its own reward. The grapple also allows you to create some truly inventive solutions to regular video game problems. Attack chopper giving you grief? Use your grapple to tie that jerk to the ground. Got an escort mission that you just know is going to take forever? Requisition a helicopter or jet, secure your target to the landing gear and fly it over there double time. It’s fun and funny and everything that amazing live demo at PAX Aus promised. But it felt like I could be having even more fun, if only the game would get out of my way.

Just Cause 3 carries itself with the assurance and swagger of a polished AAA title but feels more akin to a clumsy but very likable kid, excited to show you all of their toys without being sure where to start and making a mess in the process. I’m sure this will be a significant learning experience for Avalanche. This developer has a truly exceptional Just Cause game in them and they came tantalisingly close with this one, but as badly as I wanted to love this game – and I do want to love it – I spent far more time frustrated with it than anything else.