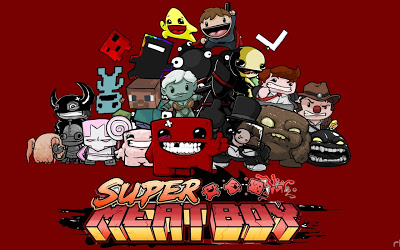 All hail Super Meat Boy! This chunky little character consisting of a sloppy cube of meat, is as hilarious and fun to navigate as his gaming forefathers, made popular for their simplicity, difficulty and clever use of odd concepts. This funky gem created by developers Team Meat, may have succeeded in bringing the excitement and gameplay of 80s and 90s platformers, such as Super Mario Bros and Ghosts’n Goblins to a new generation of gamers.

The game’s storyline follows the dependable formula of boy meets girl, girl is kidnapped by evil villain, boy begins endless pursuit and rescue (the Princess Peach saga of Super Mario Bros springs to mind). In this case Super Meat Boy has fallen for the adorable gauzy Bandage Girl, whom is kidnapped by a suit wearing baby in a jar named Dr Fetus. Super Meat Boymakes his way through countless levels of increasing difficulty, dodging fatal buzz saws, medical waste, crumbling walls and flying monsters in order to reach his lady in waiting.

Gameplay is executed in two simple motions, running and jumping, Super Meat Boy’s sticky outer coating gives him a slippery sliding adhesiveness to any surface, especially vertical ones. He leaves behind a nice thick red meaty trail wherever he goes, with each level getting pretty meaty pretty quick. If he’s caught on something fatal, the resulting splatter is pretty spectacular and when a level is successful completed, the player is rewarded with a simultaneous replay of the multiple character deaths it took to get there (it’s disturbingly entertaining watching all the creative ways in which your character has met their demise, all at once!).

Team Meat have done a great job with controller responsiveness, adding an easy agility to character movement. The levels themselves have a few objectives which are all optional but add extra challenge,the basic one an award of an A+ grade for beating the level’s timer. There are 101 tiny bandages randomly located in really tricky areas, these are not available in every level, making it even harder to grab them all. There are 20 hidden warp zones which are like mini levels that allow certain special characters to be unlocked, some of which are exclusive to the chosen platform (8 exclusives for Xbox 360, 8 for PC and 1 for Steam).

These special characters are a nice touch and add some variety, each have their strengths and weaknesses, as well as hailing from other great games such as Steve from mine craft, Josef from Machinarium and even Super Tofu Boy from PETA’s take on the game. A boss fight completes the end of each chapter and due to Meat Boy’s inability to actually attack, there are some interesting methods for boss disposal, ranging from completing tasks which trigger a fatal event, to speeding through and surviving the level or just dodging their attacks and letting them harm themselves.

Super Meat Boy is one of those games that’s easy to master, and it’s politically incorrect characters and cut scenes make for an exhilarating experience. However, don’t kid yourself, it’s not easy to complete, in fact it’s incredibly, incredibly difficult. So much so, that whole online communities have banded together and died a million deaths in order to complete, collect and unlock everything on offer. Those committed and patient enough to finish all levels can torture themselves even further by entering Dark World, the foreboding and even more challenging counterpart to Light World.

This game is exciting, light-hearted and borders on bringing out the kind of frustration that results in controllers being thrown across rooms. Somehow though, there’s a balance that encourages the player to push on, a few teasing incentives that call to the obsessive stubborn tendencies within, making it a fun and addictive adversary.

Lowlights: Soooo difficult to conquer, hats off to the chosen few who have completed all levels!

Preview and download of Super Meat Boy for Steam can be found here >> http://store.steampowered.com/app/40800/

PETA’s (People for the Ethical Treatment of Animals) parody Super Tofu Boy for PC and MAC can be previewed and downloaded here >> http://features.peta.org/super-meat-boy-parody/