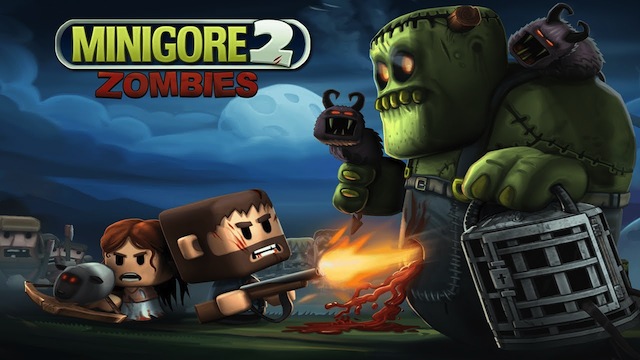 Welcome to Zombie country! Mountain Sheep (producers of Ice Rage, KingHunt and Bike Baron) have moved on from the ‘Furries’ of their original iOS release and thankfully broadened their horizons, adding to an already popular Minigore game with a Zombie laden multi-platform sequel. Simple gaming aesthetics, a new view option and some interesting special guests add to the gory hack and slash fun of Minigore 2: Zombies.

The game is still set in the ‘Hardland’ world and is a family affair, main character John Gore is on a mission to rescue his daughter Jenny (with the help of Ma, Pa and Kid Gore) from the evil Metusalem’s clutches, which includes having to face Metusalem’s abominable pet project Monstrosity. You the player are fully entitled to go into bad ass Zombie slaying mode, complete with an arsenal of pretty funky weapons (exploding sheep launcher anyone?), and some really spooky locations to basically slash and blow your way through. Mountain Sheep have made gameplay real easy with dual stick control, move your character with the right touch pad and attack your antagonizers with the left. By default auto-aim will be turned on, which makes your character swing and take a shot at the closest threat, but you can turn this off to a) save your ammo b) make things harder for yourself.

Graphics are the game’s main drawcard, characters and locations are beautifully dreamt up, shaded with an eye catching cubic quality. Locations are cloaked in enough dreariness to be creepy, without shrouding the lovely surrounds. Baddies are presented in a good humouredly cute but dangerous Gremlin-esque way, with some excellent holiday themed characters on offer like Zombie Santa, a sharp looking Easter Bunny and special guests like Evan Hsu (Minigore tagline contest winner), Hook Champ and Enviro Bear. To maintain character variety Mountain Sheep have chosen to re-use, by putting an evil spin on each character and pitting them against you, which is fine until you’re taking down an evil version of your daughter and wonder why you’re killing the family member you’re meant to be saving? It’s slightly disturbing…

You can move between levels and select characters via the Merchant’s Wagon, which is the main gateway to upgrading weapons/characters and adding handy things like an extra life or speed. This is where things can get confusing, locations are listed as levels in the wagon but they’re not moved through sequentially. A level is chosen and then further levelling up occurs within that level based on how many bosses are killed and tasks completed before all lives are lost (make sense?). It just means there’s no traditional step progression, rather the longer you survive, the harder it gets. The reward is in the gathering of loot as enemies explode and using it to kit yourself out.

An included new feature is the ‘top down camera’ view which isn’t really a value add, as the default gaming view is birds eye anyway. What is useful though is a meter that appears on either side of the screen indicating how many of what creature is on your tail. More often than not though, this meter just adds to the obstructed visibility on screen. This game thrives on the chaos it creates, baddies drop from the sky in droves (up to 150 zombies can be on screen at once) and the frustrating snail pace at which your character moves, means one can be taken down easily if not moving constantly. The large body count can get pretty messy and soon all energy is put into blindly hacking around looking for an escape gap. It’s extremely fun, but expect to button mash most of the time. Gathering three clovers off the ground turns you into Monster Jerry which is incredibly useful for clearing a path and causing major boss damage, without affecting health.

Despite it’s little foibles, Minigore 2: Zombies is very addictive and great for venting a day’s frustrations. Mountain Sheep have created an impressive world, packed with hilariously ridiculous things that could only come from the borders of insanity. It’s worth playing just for the machine gun wielding penguins alone and with a whole bunch of new features and improvements it’s a definite step-up from the original.

Highlights: Adorable characterisation with a tinge of insanity, primal blind smash action, sweet arsenal of weaponry, why only have a single anything when you can upgrade to dual!

Lowlights: Not much progression incentive, it can get a little repetitive, too much gory chaos = poor visibility