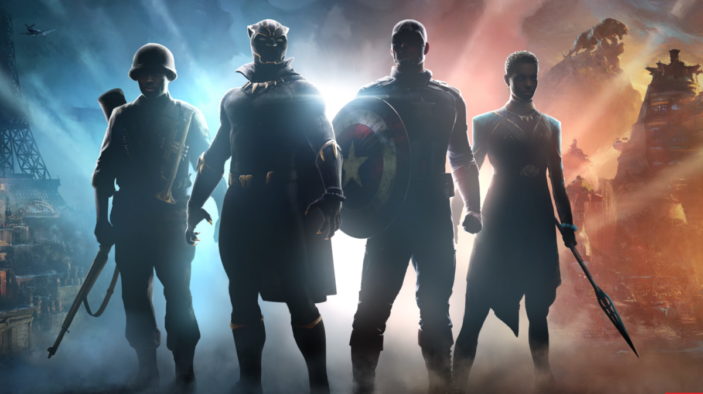 D23 has rolled around for 2022, highlighting some of Disney’s biggest upcoming projects, from Pixar films to Marvel epics and everything in between. This time however, we got a look at the first ever Disney and Marvel Games Showcase, giving gamers, Marvel fans and Disney lovers alike a glimpse at the future of their interactive slate. We thought we would take the time to round up all of the announcements and unpack our thoughts below, so let’s dive in.

As much as a surprise as this was, it’s worth noting that recent rumours had been swirling on such an idea. That being said, what a twist. Amy Hennig and Skydance New Media will indeed be working on a brand new title revolving around Black Panther and Captain America’s World War 2 efforts.

While we’re yet to see any gameplay, or even an official title, we have no doubt this will serve as some sort of third-person action adventure, given Amy Hennig’s work on the Uncharted series.

Marvel’s Midnight Suns has been given a new release date

After an indefinite delay, Marvel’s Midnight Suns will now be releasing on the 2nd of December, 2022. We’re still thankful it’s releasing this year, given we’ve already seen so much. The game will also be receiving a string of prequel shorts, comprising of five videos that will highlight the backstory of our heroes, which will begin on the 31st of October. Unfortunately, the Nintendo Switch version, which had previously been officially announced, is seemingly further away and without a new release date.

Return to The Grid in Tron Identity

This neat novel adventure will follow Query, a “detective program, tasked with solving the mystery of an unprecedented crime.” Releasing on both PC and consoles sometime in 2023, this visually sleek and minimal trailer doesn’t show off much, but is still unmistakably Tron; and we love it.

A 2D platformer starring Mickey Mouse and all your Disney favourites? Yes please! We’ll be able to join Mickey and the gang as they explore a mysterious island when the game arrives exclusively on Nintendo Switch sometime in 2023.

This new AR game from Niantic, the developer of Pokémon GO will allow players to create their very own super hero and team up with existing Marvel heroes out in the real world. It will launch on mobile devices in 2023, but you can pre-register for access here.

We got a look at the new MMORPG mobile shooter Avatar: Reckoning

This third-person action MMORPD will look to bring a whole new generation of gamers and fans alike back to Pandora, with a sleek look at some gameplay for Avatar: Reckoning. You’ll be able to create your very own Avatar and collect and customise a range of weapons as you navigate large expansive environments with and against friends online.

Marvel Snap gets a release date

This free-to-play collectible card game set in the Marvel universe will allow you to collect and utilise over 150 heroes and villains. Marvel Snap will launch globally on PC and mobile devices on the 18th of October, 2022.

Nostalgic vibes, activate. Return to Monkey Island will launch on the 19th of September, which also happens to be Talk Like a Pirate Day.

For what can be considered the highlights of Disney’s first truly independent games showcase, felt like a promising look at some intriguing ideas. Certain franchises like Mickey’s Illusion games and Monkey Island sequels are sure to charm the pants off 90’s kids like myself, but the new direction for Marvel games seems like bold take on some of the more underrated and obscure stories that Marvel has to offer. We can’t wait for more. Stay tuned for more news as it drops.