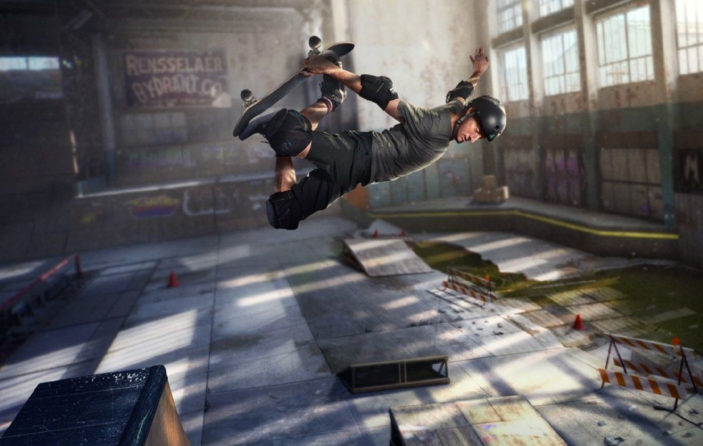 So well-known is it within in the games sphere that it hardly seems like it needs any background. I’ll write a quick one just in case: You are a skateboarder. You perform cool skateboard tricks on a variety of levels that cater to your specific skillset. As you progress, you can upgrade your skater until they are able to perform eye-popping feats that defy physics and physiology alike.

You get two minutes to perform as many tricks as you can, as fast as you can. At the end of the run, the game rewards you with cold, hard cash for being a deadset legend. While you are on your run, you might complete a few objectives at the same time — completing gaps (small jumps), breaking into hidden areas or, in a mechanic that instantly shows the series’ age, collect hidden VHS tapes.

VHS tapes. That’s how long its been since I’ve played a THPS game. VHS tapes were still common at the time. Christ, I feel old.

My first run in the Tony Hawk’s Pro Skater 1+2 demo was bad. It wasn’t the game’s fault, I was just trying to shake out 20 years of rust.

My second run was an improvement. I was starting to get the hang of it.

On my third run, something happened. I focused my chi. My third eye opened. I entered the Avatar State. Call it what you will. The lights flickered on in some dusty corner of my brain and, suddenly, I was back. Each successive run became an endless parade of tricks strung together with manuals and grinds.

The two-minute timer, much as it had done when I’d played in high school, became meaningless as my repertoire stretched into infinity. The ancient techniques still held their power: if the trick never ends, the timer can’t run out. Where the original game never took this into account — it was emergent behaviour that came from the player base — the new version embraces it, switching to Overtime until you stack it or decide to stop.

Basically, if I was looking for a sign that Tony Hawk’s Pro Skater 1+2 was the real deal, I have it.

What’s in the demo

The level included in the demo is, of course, the famous warehouse level from the original THPS. Considered the quintessential Tony Hawk’s Pro Skater level, the warehouse has appeared in numerous series entries over the years. The old loading screen would tell the player it was located in Woodland Hills, California, a suburb in the north of Los Angeles. While Woodland Hills contained no actual skate warehouse, it was where the offices of original developer Neversoft were found.

The warehouse is exactly as you remember it, with a steep drop-in, numerous quarter pipes, a half-pipe in the right-hand quadrant, the taxi covered in wooden ramps, the long center rail, and the foreman’s office above the half-pipe. It looks slightly different, due to the fresh set of textures current dev Vicarious Visions have implemented, but the geometry and scale are exactly the same.

Models look quite good and Hawk’s likeness is very strong. The demo ran at a solid 60fps in 4K res on my PS4 Pro, and though it supports HDR, it’s hard to see what impact that has on a level painted industrial brown. Only slight adjustments have been made to character animations, mostly in the bails and stacks it seems. Maybe it’s the higher-quality model but when Hawk grabs the small of his back after a wipeout, you feel for him.

Hawk is the only skater available in the demo, and you can’t upgrade his stats or anything. That’s not a surprise for a demo. All that work will come later.

One question I know fans will ask, even about a demo: Which songs are included? You have four songs, two classics and a pair of new tracks (from a much longer selection of new music appearing in the full game). Included here are Guerilla Radio by Rage Against the Machine,  Superman by Goldfinger,  Lose Control by Tyrone Briggs, and Afraid of Heights by Billy Talent.

The whole point of this demo is that it’s a warm-up, a reminder of the game that was and the promise of what’s to come. It feels like returning to your hometown after a long time away — everything looks a little different, but the most important things remain the same.

Tony Hawk’s Pro Skater 1+2 launches September 4, 2020 on PlayStation 4, Xbox One and Windows PC. The demo we previewed is available now to anyone who pre-orders the game.